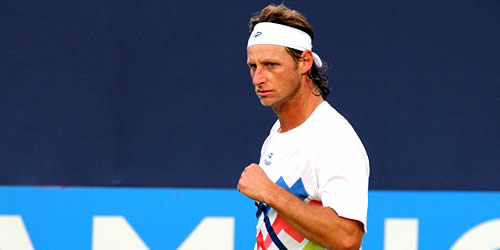 It may not have been the line-up that most envisaged for semi-final Saturday in the heart of London.

Not one of the five top-20 men playing at the Aegon Championships was on show, not one of the top five seeds, and none had won a title this year. Indeed, one had never even played a semi-final until this day.

Grigor Dimitrov had promised much since he became Junior Wimbledon and US Open champion in 2008, and had already impressed the Queen’s Club’s faithful before this year. He played his first ATP match here in 2009 and had appeared every year since.

This one was special, though. Since his last visit to London, he had thrilled Wimbledon with his performance against Jo-Wilfried Tsonga, had risen up the rankings to a high of 52, and is still one of the youngest men in the top 100.

He had also charmed—talking happily and fluently in three languages, chatting to the ball-girls while they held his umbrella, but mostly with his tennis.

Not for nothing was he dubbed the “new Federer”: He has the dark good looks, the sweeping single-handed backhand and a service motion straight out of the Swiss’s tennis manual. But despite his undoubted talent, Dimitrov had found it hard to string the wins together, almost distracted, it seemed, by the expectations.

Appropriate, then, that the fully-formed package arrived here, the site of his first tournament on the surface he loves the best.

He faced, by chance, another man replete with tennis talent, the US Open Junior champion exactly 10 years before him, indeed a man who reached the Wimbledon final at the tender age of 20 and won the Masters Cup three years later. Altogether, David Nalbandian had won 11 titles from 22 finals, and also had other noteworthy achievement to his name. In 2007, he became the only man to beat the No1 and 2 in the world, Federer and Rafael Nadal, on his way to two straight Masters titles.

In short, Nalbandian built a reputation as a master tactician, light of foot, soft of hand and with one of the most destructive cross-court backhands in the business. But his career was blighted by injury, surgery, and more injury.

Not for the first time, he had climbed the ladder—from 150 two years ago to 87 this January to inside the top 40—and this week he also overcame perhaps the harshest of schedules in the draw.

Due to play the first match of the tournament on Centre Court on a washed-out Monday, he was switched to the last slot on Court 1 on Tuesday, Wednesday and Thursday. Rain intervened again, and Thursday’s match was moved to Friday, still on Court 1, where, having won, he then played his quarter-final a couple of hours later—both matches going to three sets.

Would the 30-year-old legs make it through another match against the young pretender?

The answer was a resounding yes, in one of the most intriguing, mixed-up, multi-talented matches of the week.

The wind, already strong, carried the banks of grey and white cloud across the Centre Court as though in fast-forward, like a film on how hurricanes are formed.

Even the flags could not take the strain—they had been removed during the first semi-final—and the serve of both men was the key component to suffer.

Both were broken in their opening games and, although they each held their second games, three more games went against serve before Nalbandian held in the eighth to take a 5-3 lead. Dimitrov followed suit, asking the big question of his opponent: Could Nalbandian hold serve again, with one of the highest ball tosses in the game and serving into a fierce wind?

The answer was a resounding yes. The notorious Argentine backhand that wrecked havoc against Nadal in those two Masters in 2007 and pushed him to three sets as recently as the Indian Wells quarter-finals, carved its clean, angled trajectory to bring up set point and he served out to love, 6-4. 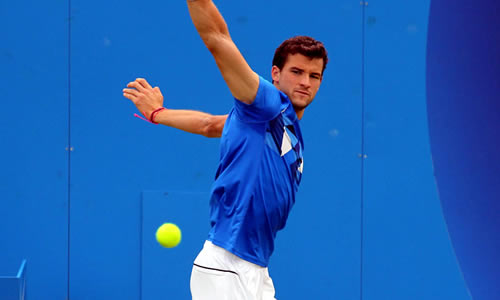 Dimitrov, throughout the tournament, had struggled to hold his footing on the greasy outer margins of the Centre Court, and when he took a heavy fall in the opening game of the second set attempting to retrieve a drop-shot, both players took a moment to make sure all was well.

The Bulgarian did hold serve but the experience of his opponent began to shine through in the increasingly difficult conditions. Both players uses backhand slice to great effect but, time and again, it seemed to be the younger man who clipped the tape first and, with skimming slice, the ball almost always returns from whence it came. Dimitrov faced two break points and went 2-1 down.

The Bulgarian backhand is a beautiful thing, an expansive sweep of a shot that draws gasps when it shoots like an arrow down the line. But in the wind, the Nalbandian approach, more compact, using two hands to add top-spin and angle with great precision, was the more profitable, percentage shot.

The Argentine’s footwork helped him make fine last-minute adjustments to pick up his opponent’s serve and return them to alternate side lines. It was clever without being showy and he worked his way through deuce to hold, 3-1.

Dimitrov was not deterred and came back with his own moments of brilliance. He held to love in the fifth game with three big serves and bold volley put-away. He then took on Nalbandian in a series of net exchanges to break, and a drop-shot winner consolidated his own serve to 15. He led 4-3 and took his opponent to deuce in the eighth, but failed to break.

It all came down to the next game. The two men began to slice each other to ribbons, each backhand making barely a sound as it skimmed low from racket to racket. From 15-40 down, Dimitrov pulled back to deuce and survived twice more as raindrops mixed with the wind, encouraging the players to bring the match to a conclusion. Finally, Nalbandian played a bold drop-shot followed by a volley put-away to make the break.

The sun suddenly burst through the scudding clouds to light up the final game, a master class of accurate serving, volley winners and a forehand to polish off the match: 6-4.

Nalbandian would not be drawn on whether experience had seen him through the tough opponent and conditions: “It was very, very tough: I don’t think it was a good match. I think we both made mistakes we would not otherwise have made.”

Nor would he be drawn on the impact of the schedule on his progress: “Yes, it was a really tricky week. It wasn’t easy, but unfortunately that’s the way it is. You can’t do anything. But I feel good.”

And though he claimed “I don’t really care” about how long it had been since he played a grass final, he must surely be just a little chuffed to be playing the first one since that Wimbledon a whole decade ago.