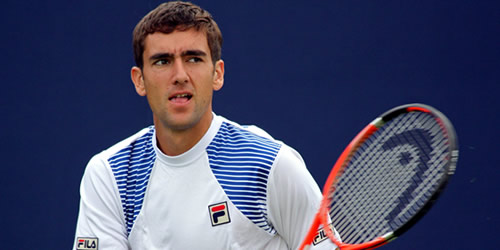 It may not have been the line-up that most envisaged for semi-final Saturday in the heart of London.

Indeed only one of the four men had reached a final, and that man was Marin Cilic, one of the pair of big men to contest the first semi-final. But both he and Sam Querrey had enjoyed considerably higher rankings than they brought to this match.

Cilic had broken the top 10 as a 21-year-old more than two years ago, but poor form and illness took him out of the top 30 last year. After a strong showing on the indoor courts last autumn, he then faced another setback, missing the first two months of 2012 with a knee injury. Of late, though, he had begun to show a welcome sign of a recovery in both form and fitness.

Querrey, too, was a better player than his current ranking suggested. Last year, he reached a career high No17 in January, and came to Queen’s in the summer as defending champion. But things were about to take a downturn. He fell in the third round and immediately underwent elbow surgery that took him out of the tour for three months.

His return has been slow, from a low of 125 to his current 77, but a quarter-final in Memphis and now the semis at Queen’s confirmed his own view of things: “I feel like I’m playing well. Just lost a couple of close ones. You know, this is the best I have felt this year, I guess.”

His weapons are, of course, renowned and have come to the fore on this week’s slick grass. With 55 aces, 87 per cent of first serve points won and more than 96 per cent of service games won, Cilic knew what he was up against. But Querrey, too, knew he faced impressive counter-punching stats: Cilic topped the tournament on points won against the serve and return games won.

Little wonder that their only previous meeting, at Wimbledon in 2009, took five sets and three and a half hours to decide in the Croat’s favour—with two tie-breaks along the way.

Cilic and Querrey had much else in common too: both with six career titles from a similar number of finals, both 6ft 6in tall, both still young—23 and 24 respectively—and both on an upward trajectory.

The gusting wind blasted away a brief morning shower from West Kensington, but persisted across Centre Court, bringing cloud and sunshine in quick succession. It was far from easy, and the first to struggle on serve was Cilic.

In the third game, lasting little short of 20 minutes, he faced nine break points but, with the wind playing havoc at both ends, a Querrey error finally gave Cilic the hold. Three games had taken 25 minutes.

They edged, on serve, through the set, scattering errors, until Cilic pulled off a couple of forehand winners and Querrey hit his forehand long for three break points. Cilic drew another error from the American for the break, 5-3.

Now more settled, it seemed, Cilic fired through his service game to take the set in rather faster order than its opening suggested, especially as Querrey’s first serve was up at 88 per cent. 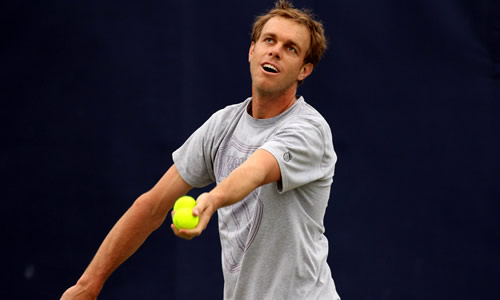 The Croat moved easily, more nimble than his opponent and perhaps benefitting from a truncated quarter-final match against an injured Yen-Hsun Lu: Querrey, for his part, had played two three-setters in straight days.

Yet Querrey was the first to get another chance of a break in the eighth game and converted it by ghosting in to pick off a volley. It left him serving for the set, 5-3, and, with his biggest weapon now finding its mark, and he served out with an ace.

Just as anticipated, this would go to a final set. Cilic resisted a deuce in his opening service game only to work a break point against Querrey on his. The American took a heavy fall trying to defend his wide forehand wing to go 2-0 down and, a love hold to Cilic took the Croat to 3-0.

So bad had he wind now become that the advertising signs on the net came untethered and the flags around the stadium were lowered while they still held together.

Despite seeming in control of the conditions and the match, Cilic gave Querrey another chance to break with a wild forehand error and, an hour and 50 minutes into the match, they were all level again.

If Querrey could get his serving back up to its first-set level, he could yet take the match, but he did not. Cilic broke straight back when a touch volley from the American fell well short.

It took moments for Cilic to serve out the set and match, a last foray to the net finishing the job.

He had reached his first grass-court final, but would have to wait a couple more hours to discover if his opponent was the fresh talent of Grigor Dimitrov or the experienced hands of David Nalbandian.