French Open 2013: Maria Sharapova books her place in the final thanks to a 6-1 2-6 6-4 win over Victoria Azarenka in the last four 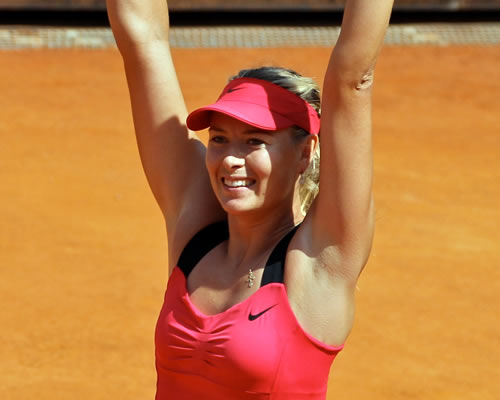 There were, in the end, few surprises about the last four standing in the women’s French Open semi-finals.

Each match contained a former Roland Garros champion: Serena Williams and Maria Sharapova. Each contained one of last year’s finalists: Sharapova and the woman she beat, Sara Errani. And adding some spice to the mix in her first French Open semi was the most recent winner of a Grand Slam—in Australia—Victoria Azarenka.

Both matches were mouth-watering prospects, with the first of them slated to be the battle royal between the tall, rangy power of Sharapova and Azarenka. Both statuesque six-footers sporting a mane of blond hair, both with big right-handed power games played at high volume, their meeting was highly anticipated for much more compelling reasons.

Azarenka, who held the No1 ranking for most of last year, was one of the few women to hold a head-to-head advantage over Sharapova: seven wins to five losses. As the Russian surged back to form last year to contest that No1 ranking, the two of them met six times, and still Azarenka held the advantage, 4-2.

They had played on clay just twice in all those years. In Rome in 2011, Sharapova won the match when her opponent retired at 0-3 in the second set, but Azarenka had won the first set. Then last year, they met on the indoor clay of Stuttgart, and this time Sharapova won in straight sets, went on to claim the title, defended her title in Rome and took the French Open for the first time in her career.

For a woman who had struggled to find consistent form on clay in her early career—and had only reached the semis in Paris before—here was proof of the great strides she had made. Indeed, she was now on a run of 35 wins in her last 37 matches on the surface.

And in some ways, Azarenka seemed to be following a similar path, her solitary clay title out of 16 coming in Marbella. But she was getting there, too. She transitioned better from hard to clay courts last year and this, making finals in Madrid, Stuttgart and Rome. And in reaching her first semi at Roland Garros this month, she had come into form with a vengeance, beating former French champion Francesca Schiavone and then the nimble Maria Kirilenko. Azarenka suddenly looked very much a contender for the title.

So this felt as though one of the fiercest rivalries on the women’s tour was ready for a new instalment.

It would early on become a battle between serving and returning. Azarenka, one of the most aggressive returners in women’s tennis, took the ball early as Sharapova struggled to get her first serve into court and twice double faulted to concede her opening game to love. But then, the Russian returned in kind, jumping onto the Azarenka serve with huge forehands, and a backhand winner thrown in for good measure, to force deuce and then pressure an error from Azarenka for a break back. Signalled by a roaring fist pump, that took the brakes off the Sharapova game.

She began to get her first serve into play and struck her first ball off the ground with enormous power and depth, way beyond the retrieval even of Azarenka.

Sharapova’s returns of serve had the same fire, whether on the forehand or backhand, and she broke to love. From this point on, she dropped only one point on her first serve, winning 10 from 11, and made 17 winners to Azarenka’s four.

Her improved movement was most evident in her open-stance reach to the backhand wing, where she made one down-the-line winner on the run reminiscent of Rafael Nadal. She was, quite simply, like a runaway train, and took the set, 6-1, in 28 minutes.

After a clutch of tightly contested games at the start of the second set, there were signs that Azarenka had modified her tactics, serving with wider angles and dropping some shots a little shorter to draw Sharapova out of her comfort and power zone on top of the baseline.

And despite the huge pressure she had to absorb, Azarenka was making few unforced errors. To six in the opening set, she added only three in the second, and that piled the pressure back on Sharapova.

As a result, the Russian began to make more errors and Azarenka broke the rhythm still more with a couple of winning drop shots and some fine kick and sliced serving. She broke in the sixth for a 4-2 lead and again in the eighth, after a controversial line call disrupted Sharapova’s rhythm, to take the set, 6-2.

Here, at last, was the match that most had anticipated. But the mood was dampened when an unexpected shower halted play. The question was, would the timely pause help Sharapova regroup? Would it break the Azarenka momentum?

It was Azarenka who faced the first test, serving against a fiercely refocused Sharapova. The battle was played out in a long, testing game: The Russian aimed to pound her opponent into submission; Azarenka tested the movement of Sharapova to the side and forward. The Belarusian survived a break point to hold but found herself pinned to baseline in the third game as Sharapova regained the impetus of the opening set and broke.

Much seemed to depend on whether Sharapova could manage her own game, and some wayward serving—two aces alternating with three doubles faults—found her at break point. She saved it, but on the next break point, another double fault took her back to 2-2, but not for long.

She found the lines three times in a row on her way to a break back, her determination audible in the growing volume of her scream. She made an ace to hold serve from deuce for a 4-2 lead, broke again and stormed from 0-30 down with three blistering winners to bring up match points. But an untimely 11th double fault conceded her serve, and Azarenka took advantage with gutsy love hold. Sharapova would have to serve for the match again, and this time, the champion made no mistakes, serving out to love with an ace, 6-4.

It was a match of ups and downs, each playing brilliant tennis for stretches but rarely doing so at the same time. In the end, it was the bolder player who took the spoils. Sharapova may have notched up 22 errors in the third set but she also made 22 winners. Azarenka made just three.

So one of last year’s finalists was through. Roland Garros would have to wait for a ceremony celebrating the 40th anniversary of the WTA to find out whether the other, Errani, could beat world No1 Williams for the first time.