French Open 2013: Serena Williams sets up a final against Maria Sharapova after a straight-sets demolition of Sara Errani 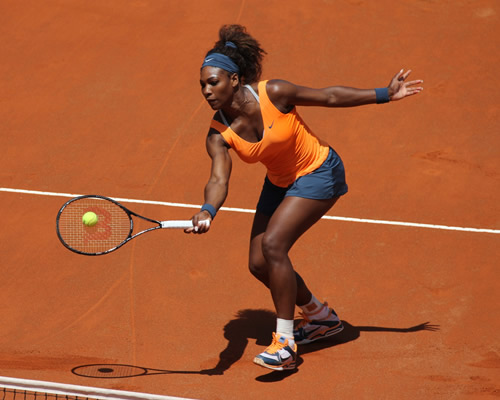 After a semi-final that brought together two such closely-matched women—Maria Sharapova and Victoria Azarenka were separated by one place in the rankings, a couple of centimetres in height and had two titles apiece this year—the second match was one of huge contrasts.

The world’s new No5, Sara Errani, had played Serena Williams five times, and five times she had lost: From Rome to Dubai to New York, it was the same story—including their most recent match in Madrid this year.

Errani, a petit 5ft 4in with the energy and all-court skill to win not only multiple singles titles but to top the doubles rankings too, reached her first Grand Slam final here last year. It was a break-through season that saw her clamber up the rankings to a current career high.

Her will to win, her remarkable fitness and her flexible range of shots ensured she did not disappoint again this year. She defeated No4 Agnieszka Radwanska in the quarters to score her first top-5 win, but she would need much more to reach another final.

As if their previous match-record was not enough of a concern for the diminutive Italian, Williams appeared to be in the form of her life. In a 29 match-winning streak, she had already won three clay court titles among her five, with victories over No3 Azarenka in Rome and No2 Sharapova in Madrid.

As Errani admitted: “It’s for sure very difficult because she’s very strong. Physically she’s an incredible athlete, so it’s not easy to play against her because she has a lot of power. Maybe on clay it’s a bit better than other surfaces, but it will be tough, very tough.”

If there was a small crumb of hope, it came perhaps in the fact that Williams had not won in Roland Garros since 2002 and, now aged 31, she had not reached the semis for a decade. But when it comes to Williams, such facts seems to sharpen the appetite—and her game.

And it started ominously for Errani. Williams opened with a love service game—no aces, but big deliveries followed by a surge to the net for overhead finishes.

Errani showed her all-court prowess with some nice touch play and a couple of volley winners to reach deuce on her own service, but without the power of a Williams serve, she was exposed to some sizzling return-of-serve winners, one after another. The break came at the second time of asking, and was followed by a quick hold and another break by Williams.

So swift were the points—winners from Williams or forced errors from Errani—that 16 minutes saw Williams 4-0 ahead, and with 12 winners to Errani’s one.

The crowd already sensed a whitewash and was abuzz as Williams played a perfect drop-shot winner, then an off-backhand winner and finally a serve winner: 5-0 in 19 minutes.

Even chasing down a passing shot at the net, Williams found a winner, and then made the fastest return of serve thus far, a racket-busting 105 mph winner. It was ruthless and brilliant against, it was easy to forget, last year’s finalist and world No5.

Nevertheless, the Italian fighter danced on her base-line, trying to find more speed, but knowing that unless the Williams focus and level dropped, it was a lost cause.

Errani cranked up the decibels and effort to work a small opening, 15-30, only to see the chances smashed out of her reach. Little wonder that her best friend and doubles partner, Roberta Vinci, looked so concerned.

A stat on their serve speed flashed up: Williams 118 mph, Errani 88 mph. That gave little cause for hope, and neither did seeing Williams stride into the net for a swinging mid-court smash winner. A forehand winner broke Errani to love, and three aces and an outright serve winner took Williams to 3-0.

The Errani spirit would not be doused just yet, though her expression as Williams rushed to the net for a backhand volley pickup was a picture. The crowd roared her on as she served at 40-30, she forced an error, and won a game. The Italian raised her arms in celebration and took the applause.

But as the shadows began to creep across Philipp Chatrier, the sun continued to set on Errani’s campaign. Williams allowed her just two more points, serving out a remarkable win, 6-1, in 46 minutes.

Williams had taken 52 out of the 68 points played, made 40 winners to Errani’s two, and made only 12 errors—and that was despite her serve being far from its best, a mere 52 percent of first deliveries finding their mark.

However, the resilience of Errani shone through the one-sided statistics in one regard. Against such superlative tennis, she made only three unforced errors in the match—though presumably that will be cold comfort.

What may lift the Errani spirits is the fight yet to come with partner Vinci: They play the semi-finals tomorrow in pursuit of their doubles title defence.

What comfort Sharapova would find, if she paused long enough to see any of the second semi-final, is hard to guess, especially in the context of her past record against Williams.

Williams has won 13 of their 15 matches, including both on clay. Indeed the last time the Russian won was in 2004 and since then, Sharapova has taken just three sets. On the plus side, one of those sets was this spring in Miami—though Williams went on to win in Madrid for the loss of just five games.

It means, in short, that Sharapova will have to play at the level she found in the opening set against Azarenka—and maintain it through the whole match. And even then, if Williams brings the same game to court as she did against Errani, she seems destined to win her first French Open titles in 11 years.