"The crowd was always interested in wheelchair tennis... but now I think there are actually fans of the sport" 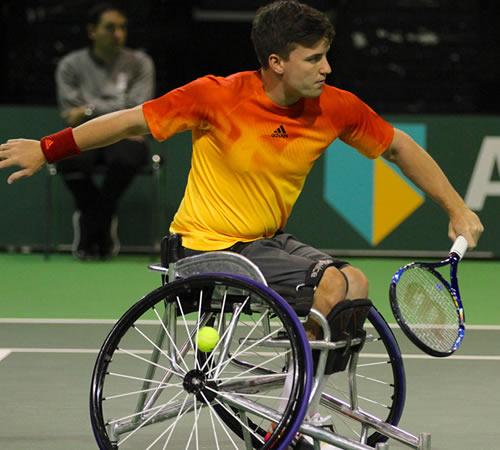 On a damp, chilly Thursday afternoon in Rotterdam, two tennis players were cooking up a storm in the heart of the vast Ahoy Sports Arena.

At stake was a place in the final of one of this sport’s most prestigious tournaments, the ABN AMRO Championships. Three-time defending doubles champion Reid was already out of that draw, but his eye was set on a first singles title to add to his first Major singles title at the Australian Open last month.

Houdet, a powerhouse of a man, looked set to deny Reid by winning the first set, but the nimble, left-handed Briton had other ideas and levelled at a set apiece. By now, as Reid put it afterwards, “you had to stand on someone’s shoulders to see.” He was not wrong.

There is a good reason why wheelchair tennis in Rotterdam, where it has been integrated with the ATP tournament since its debut in 2009, has such a high profile. Director Esther Vergeer is one of the Netherlands’ most beloved athletes.

When Vergeer retired from playing tennis, right here three years ago, she drew a line under 470 matches—10 years—without defeat. She was ITF Wheelchair World Champion for 13 straight years; owned 44 Grand Slam titles and seven Paralympic gold medals; and she had been world No1 since 1999. No wonder Novak Djokovic called her “one of the women in tennis I admire the most”, and Roger Federer said, at that 2013 retirement: “Esther is an amazing athlete, a great personality, and has done one of the most extraordinary things in our sport.”

I asked Reid about his own inspirations, and naturally Vergeer was among them.

“When it comes to wheelchair tennis, Esther is a big inspiration. I mean what she did was incredible, by far the best female wheelchair player there ever was and even now, no-one would come near her.”

But 24-year-old Reid has been inspired by many others, and for many reasons.

“I used to love watching Federer—I still do—he was always my favourite player when I was younger. And watching Andy [Murray] come through as a Scottish player, someone who’s come from near where you live, and on the biggest stage.

“But I’ve met a lot of people since I’ve been travelling who have inspired in different ways, some through sport, some through their personal circumstances. There’s a South African wheelchair player, Lucas Sithole [No3 in quad wheelchair rankings]. He’s got no legs and one arm. I mean, how many people would that happen to and would think of taking up a sport? It’s incredible what he’s done.”

But Reid’s story is also an incredible one, totting up ‘youngest evers’ since he first took up wheelchair tennis after contracting transverse myelitis aged 13. 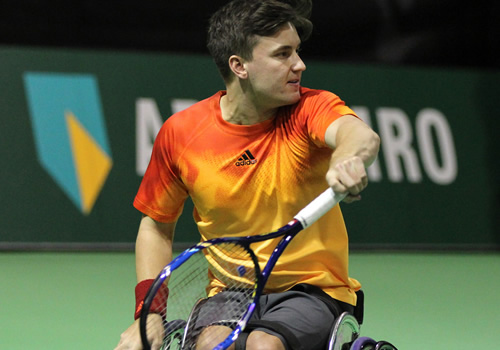 Reid was already a talented junior player in a tennis-loving family when the paralysing condition, caused by inflammation to the spinal cord, came out of the blue. However, within weeks of leaving hospital, Reid was playing wheelchair tennis. By 2007, he was GB’s youngest men’s singles champion before his 16th birthday, represented GB in the Beijing Paralympics the next year, and was the youngest British No1 before he was 18.

Teamed up with Houdet, Reid won the doubles Masters—the end-of-year showdown between the best players in the world—in 2013 and, still aged only 23, won his first Grand Slams in doubles at Roland Garros and the US Open last year. But Australia was Reid’s first singles Major, and he beat 20-time singles Grand Slam champion and then No1, Shingo Kunieda, en route.

So in the space of less than a month, Reid has beaten two active No1s, which he acknowledged was “a nice feeling… beating the top seed is an extra bonus.”

And he admitted that he had started to notice a few changes in his profile.

“Definitely all the media coverage which came after the Open was something I never experienced before. And I enjoyed doing it. It was great for me and for the sport to have that much attention, and since then, even small things like coming through the airport on the way here—well, I guess I’m quite conspicuous!—I’ve never really had that before.”

Now I think there are actually fans of the sport, and the level has improved significantly

Had it helped that British—indeed Scottish—success became one of the stories of the Australian Open? He is quick to agree.

“I said that to my coach the day after the final—we were discussing if it would have been better if I’d been the only one doing that well, and we said not at all! With [Andy and Jamie] doing so well, everybody’s eyes were on Melbourne: It helped that they were interested in all the British players. And it’s just great to see wheelchair tennis being talked about at the same level as those guys.”

Were it not for a punishing schedule caused by Melbourne’s weather, Reid may indeed have been celebrating two titles: He played and lost the doubles final just a couple of hours after winning in singles. It had been, he admitted, testing.

“Physically and mentally because it was a draining week already up to the final. I was beginning to feel my back a little bit and obviously with all the adrenalin and emotions that came after winning the singles, to try and refocus for another final on the same day was pretty tough.”

Then he threw in, as an aside, that it had been even worse in Sydney the previous week: “I ended up playing six matches in two days because of rain!”

Little wonder, then, that he has been feeling the effects of his time ‘down under’: “Yes, I did have a few days afterwards when I was pretty stiff, pretty sore, and had a busy week with a lot of media and travelling home. So the first few days here were quite light training sessions. I feel pretty good now.”

He has clearly revelled in the Rotterdam atmosphere, too, and although there are few tournaments outside the Grand Slams that integrate wheelchair events into the ATP/WTA tours, Reid has noticed that his sport is enjoying a growing following throughout the season.

“The crowd was always interested in wheelchair tennis, especially at the Grand Slams. They would walk by the court and be curious. But now I think there are actually fans of the sport, and the level has improved significantly.

“The reason why the level has risen so much is the professionalism. I’ve been playing about 11 years now, and when I started, some of the best players in the world would go out and party the night before matches. Now you can’t afford to think like that, because everybody’s so professional and devote their lives to their sport.”

The rest of the year should bring still more visibility to Reid and his British female counterpart, US Open women’s champion Jordanne Whiley.

First, Wimbledon is to add wheelchair singles to its schedule for the first time, and welcome though that is, playing both singles and doubles on grass poses one of the sport’s toughest challenges. Reid explains:

“Physically it’s harder on the body because it’s quite heavy. The wheels sink into the grass a little bit, though the surface is harder when we get there in the second week. But it’s going to be a good test of everybody’s physical fitness.”

Soon after, the tour heads to Rio for the Paralympics, what Reid believes is still the pinnacle in wheelchair tennis.

“I think everybody would agree in our sport that the Paralympics is still the main goal, to win gold medals. It has, though, shifted since I started playing: the Grand Slams were further down the priorities, but they are becoming more on a level.”

We return, finally, to Rotterdam and to Vergeer, a constant presence around the wheelchair courts, and in constant demand for a photo here, a few words there. And she was on hand to present the singles trophy to the new champion, for Reid had not only beaten Houdet but also the man who had been his doubles partner here, Stefan Olsson, 6-3, 7-6(7).

And just as for Vergeer, basketball had been an early contender in Reid’s plans.

“I used to play a lot of football, cross-country running, athletics, badminton… When I first started using the wheelchair, the first sport I went to was basketball. The guys who were organising it were really cautious with me, and said, ‘you can watch’, and obviously first impressions were like, ‘I don’t want to go back there’. And then I tried tennis…”

Reid has since been persuaded back to playing basketball socially: “I love that sport as well, now, train twice a week when I’m home.”

He enjoys the camaraderie of a team, and basketball also sharpens his mobility, turning, endurance and more. But tennis fans will thank their lucky stars that basketball eventually lost out in the affections of both Vergeer and Reid.