Our men's tennis review of 2017 begins in Dubai, and continues in chronological order through an entirely personal selection 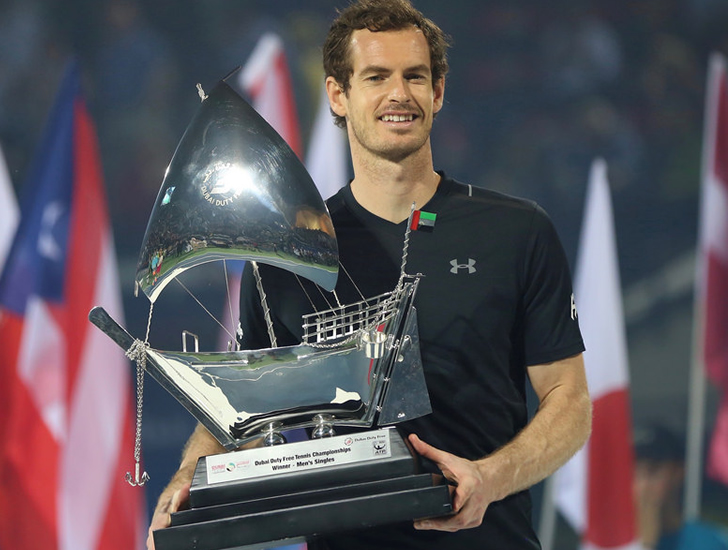 “In the bleak mid-winter…”, the sun-drenched sport of tennis at last pauses for breath.

The players have done their bit for another year, starting on the first day of 2017—and Brisbane did indeed begin on 1 January—and ending deep into November with the climax at London’s O2 and finally the Challenger circuit drawing the line a week later.

Yes, it’s a long, hard, time-zone busting, jet-lag draining calendar that zig-zags between southern and northern hemispheres, between Australasia and Europe, between north and south America.

And if that was not enough, tennis veers from hot, hard courts to the very different challenges of clay, which is swiftly followed by its short, sharp and beautiful residency on grass. Along the way, players can even depart from the tried and tested to visit a damp and chilly Europe for an indoor diversion in February, or kick their heels on the red stuff between Wimbledon and the US Open Series.

So yes, the players have done their bit to entertain—and, even now, are trickling back to training after a brief recovery on some remote sandy beach. Too soon back to the drawing board, then, and not just for the players.

For this particular correspondent, then, age and weary bones are the excuse for offering up some alternative favourites during a fortnight that everywhere is celebrating 2017’s ‘best of’ matches and memories.

Yes, the Australian Open could fill every ‘best match’ slot, every ‘memorable moment’ list, but I watched the stories unfold from London—so I disqualify it from my list. No Roger-and-Rafa final, nor the huge obstacles they overcame to reach their showdown—for Rafael Nadal, Alexander Zverev and Grigor Dimitrov, for Roger Federer, Kei Nishikori and Stan Wawrinka, all in five sets. 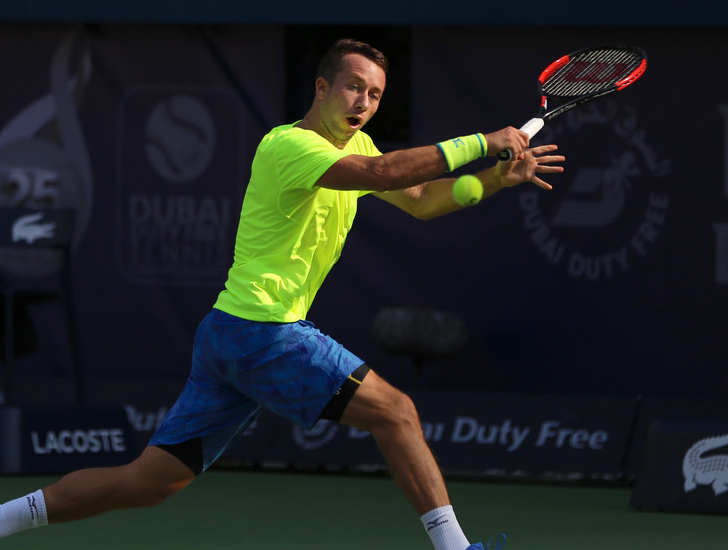 No Miami Open, either, though it was clear almost from the first point that Federer’s semi-final against Nick Kyrgios would become one of the matches of 2017, three hours and 11 minutes of sizzling rallies and taut emotions, a match that stretched sinew and nerve. These two would recapitulate the battle come September—more of that later.

No Denis Shapovalov lighting up Montreal to reach a breakthrough Masters semi-final via both Juan Martin del Potro and Rafael Nadal in winning tie-break style. But he lit up the biggest arena in tennis several times over come New York to reach the fourth round, and via qualifying—yes, a personal and permissible favourite.

Enough, though, of what is not here. What stood out from the crowd on this reporter’s travels through of 2017? We begin in Dubai, and continue in chronological order through an entirely personal selection.

Murray holds off Kohlschreiber on way to Dubai title

There have been few years in the last decade that the elegant German, Philipp Kohlschreiber, has not won a title, and 2017 was no different. But arguably, while his best results came on clay, his best tennis may have come on the hard courts of Dubai against then No1—the ultimate champion—Andy Murray.

In his unseeded opponent, Murray faced the owner of a silky one-handed backhand, nimble movement, forehand zip, and great tactical craft. The German, now 34 years old, has resided between 16 and 40 in the ranks for 10 years yet still, he said after reaching his third quarter-final in Dubai in four years, he hoped to improve on that career-high. And against Murray, in some scintillating tennis and painfully near misses, he showed that was not out of the question.

There were, perhaps, a couple of match points where Kohlschreiber had the play on his racket, went for too much and missed the line. And the set would be determined by two over-hit forehands from the German: Murray took it, 7-6(18).

Murray’s superior fitness, strength and experience at this level of the sport now began to tell. Kohlschreiber’s legs could not maintain the remarkable form of the previous two and a half hours. Murray eventually ran out the winner, 6-1, with the clock already well past 11pm… but this was a match to long last in the memory, producing a combination of 93 winners, 35 net plays, and with not a thrown racket or umpire warning throughout.

To top it all, the losing Kohlschreiber would talk only of his pride and pleasure in the match they had both played: “Of course losing is always disappointing, but I’m not sad. I think I played great tennis, one of my best matches. OK, the result is sad, but the way I played, the way I enjoyed myself on the court, nothing to be sad about.”

Federer’s third Match for Africa—events that raise awareness and funds for his Foundation—had been scheduled for November 2016, but knee surgery and a back injury determined that the Swiss would not play a match after Wimbledon.

This spring, though, after a remarkable return at the Australian Open, and more titles in Indian Wells and Miami, he rescheduled MfA3 in April in Zurich. 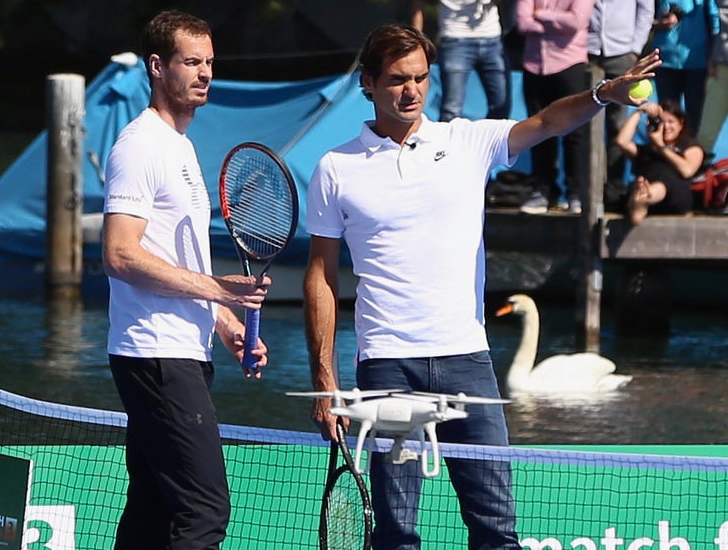 The event began, somewhat bizarrely, on a raft on the Limmat river, where Federer was joined by Murray for some light hitting. In Dubai, the Briton revealed that the Swiss had invited him almost a year before—and long before Murray became the new No1. A prescient choice, then, and although Murray was now coping with an injury, he kept his side of the deal—having recruited Federer to his own charity event in Glasgow in November.

In my own words, Zurich

Zurich will become their first meeting since the summer of 2015, the first since Murray became No1, and the first since Federer’s re-emergence as the tour’s most formidable force… As for Murray, it was certainly something of a coup to recruit Federer to his own annual fundraiser—which sold out almost 11,000 tickets within an hour.

But what shone from Zurich and then Glasgow was the relationship that has evolved between these two very different men. Family men both, philanthropic, willing to put the graft and obsession with their sport to one side to play the fool, they seem to ‘get’ each other. Federer’s words in a chilly Glasgow said it all: “It’s nice to see you back on the court… it’s just nice being on the court with you again. I’ve missed you, man.”

In my own words, Glasgow

“They don’t come much bigger in tennis, or any sport, than 19-time Major champion Roger Federer, and he had taken time out from his preparations for the imminent World Tour Finals to come to Scotland for the first time in his career.

They don’t come much more loved in these parts than Andy Murray, who this time last year was about to reach No1 for the first time, about to win the season’s finale at the O2 for the first time, had pocketed his second Olympic gold and second Wimbledon titles… and he had scored big by attaching Federer to his cause. 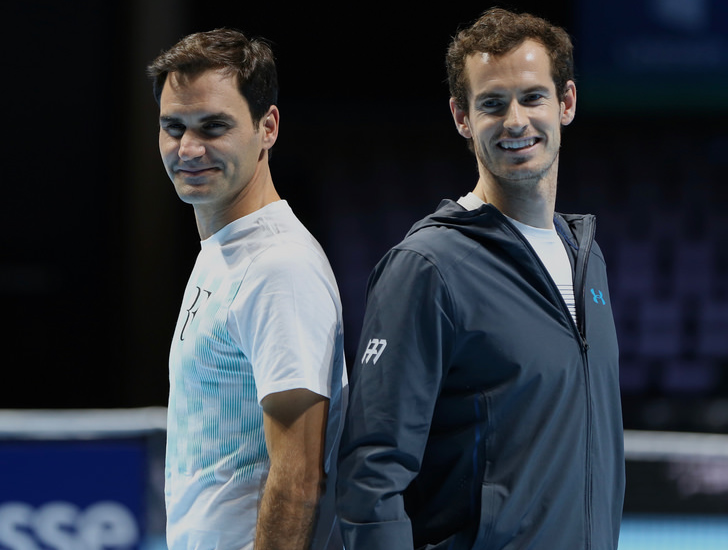 It had been helped, of course, by Murray doing the same for the Swiss in Zurich in April… And boy, did Federer, the man who is so cool, calm and collected on court, deliver. After an afternoon tennis clinic with 30 or so amateurs, led by Murray’s mother, he even volunteered mid-match to don a kilt “if one can be found”. It took around a minute… and he embraced the moment with brio, to roars from the crowd.

Murray responded in kind, donning a tam o’shanter-and-wig affair. Federer afterwards admitted that, yes, he had planned it, and Murray gave a wry smile:
“Well it covers up my bald patch.”

Federer’s parting shot was that he hoped he and Murray could soon do it all again: Few in Zurich or Glasgow would disagree.

More photos of Zurich and Glasgow »

Parts two and three will follow this weekend, with the WTA review beginning Monday.