Indoors or out, it’s hard courts all the way for Federer, Djokovic & Berdych

Marianne Bevis looks ahead to the forthcoming hard court swing, with Novak Djokovic and Roger Federer both in action 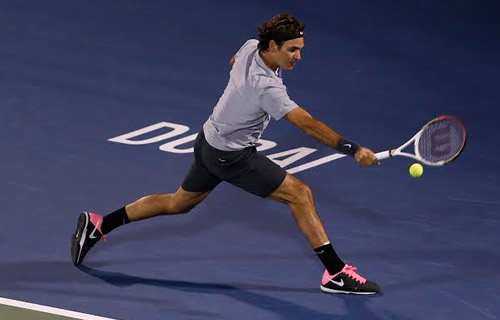 It does not take long to figure out why one of the busiest months on the tennis tour is also one that offers plenty of time indoors.

In the northern hemisphere, this can be a miserable season, so after the 43-degree heat of Australia, the return to Europe and North America must feel like a slap in the face.

Take the first 500-point tournament of the year that opens in Rotterdam in a few days’ time: its 5C degree weather is set to dip below freezing amid 50mph gusts. France hosts two tournaments this month, both close to the usually balmy Mediterranean. But the temperatures are struggling to reach 10C.

Zagreb, capital of one of Europe’s favourite summer destinations and home to the opening indoor event of the year, may climb above freezing by the weekend. So heavy was the snow in neighbouring Serbia that Novak Djokovic—returning from a skiing holiday—was pictured helping stranded compatriots.

Next week, North America lays on the first of three tournaments that pave the way through ever-warmer climes to the opening Masters of the year in Indian Wells—but the first stop, in Memphis, is currently sub-zero. What a relief, then, that the next event, in Delray Beach, boasts Miami temperatures in the high 20s.

And sure enough, that marks the transition back outdoors as the month climaxes with two impressive and considerably warmer 500-pointers, one in Dubai and the other in Acapulco—the latter played on hard courts for the first time since 1977.

Not that everyone wants to make hay only while the sun shines: Many genuinely thrive indoors. Roger Federer made a strong argument at last year’s ATP World Tour Finals to keep the season finale indoors, pointing out that all four Majors were played outside, along with all but one of the Masters. And a look at Federer’s indoor record shows why.

Despite so few top-tier tournaments being played under a roof, 20 of his 77 titles have come indoors, notching up the highest win-loss percentage on the tour. And he has enjoyed a lot of success not only at the WTFs but also at two of the 500s played inside: five titles in Basel and two in Rotterdam.

He has nevertheless opted out of next week’s Dutch tournament, and it’s clear why. He has already played 11 matches this season, seven of them in the best-of-five format—most recently indoors in the Davis Cup. Only Nadal has played more, 12, and he has bypassed both Davis Cup and any whiff of the indoors.

Federer’s compatriot Stan Wawrinka has played much the same schedule, though his outstanding effort in winning the Australian Open before racing to the other side of the world for Davis Cup duty took its toll. He has already pulled out of Montpellier and Rotterdam to nurse a leg injury, and although scheduled for Marseille, it is possible he could skip more indoor tennis to take instead a wild card into an outdoor warm-up for Indian Wells.

If he does, the new world No3 will face tough competition in both Dubai and Acapulco.

The former, long a favourite with the elite not just for the climate but for its purse, boasts not only Federer but also defending champion Djokovic.

The Serb went unbeaten between the final of the US Open and the quarter-final of the Australia Open, a 24-match streak that took in two back-to-back Masters and the WTFs crown. He even won the round-robin warm-up in Abu Dhabi before heading to Melbourne.

Unusually, though, he opted out of Serbia’s opening tie in the Davis Cup, having won both his rubbers in the semis and final last season. He explained that “after serious consultation with my team”, he needed some recuperation.

Dubai has also attracted last year’s finalist Tomas Berdych, who by then will have cranked up a substantial indoor season that began with two Davis Cup rubbers, will take in Rotterdam and then Marseille. It is part of a pattern for the big Czech who last year played 79 matches—one of the heaviest schedules on the tour.

Also playing both Rotterdam and Dubai is Juan Martin del Potro, and the Argentine is a force on hard courts whether indoors or out. He is the defending titlist in the Netherlands—where he was also finalist in 2012 before going on to win in Marseille—and has won in Basel two years in succession. Outdoors, he started the year with the Sydney title and last year reached his first Masters in four years at Indian Wells.

However, following his second-round exit at the Australian Open came news of an ongoing left wrist problem. He headed to the USA for treatment, thus creating some uncertainty over his Rotterdam defence.

One final member of the elite, Andy Murray, headed straight to the USA after the Australian Open—to play Davis Cup on clay. He won his rubbers, but it is a switch of surface that Murray would not normally seek: Of his 28 titles, none has come on clay.

And although Murray has enjoyed considerable success indoors—he won Rotterdam in 2009—his Indian Wells preparation has more usually come in Dubai. But he is one of a large group of strong players to try out the new alternative in Acapulco. For Murray in particular, Mexico is less of a leap from his Miami training base before another reduced hop to Palm Springs.

What of the remaining top 10? If they are Spanish, they are, by and large, on South American clay—though David Ferrer, playing an unusually slim-line schedule ahead Indian Wells, will switch to hard courts in Acapulco. If they are French, they are plying their indoor trade on home soil. Richard Gasquet and Jo-Wilfried, on top of indoor Davis Cup wins last week, will take in Rotterdam and Marseille.

Which of these various players and their various solutions to this multi-faceted month on the tour will arrive in prime shape for the gruelling run through Indian Wells and Miami remains to be seen. For another element is the worrying numbers of niggling injuries among other players than del Potro and Wawrinka.

Nadal is recovering from a back spasm picked up in the Australian final. Milos Raonic pulled out of Davis Cup with an ankle problem, as did John Isner, while Vasek Pospisil withdrew with a back injury. Benoit Paire pulled from all three of his scheduled February events. Grigor Dimitrov cited injury in withdrawing from Zagreb, though is still scheduled for Rotterdam. Germans Tommy Haas and Florian Mayer both have shoulder problems, while Jurgen Melzer and Janko Tipsarevic continue to carry longer-term injuries.

So the eventual schedules and results in the coming weeks will reveal much. For now, these are the projected seeds drawn from the current top 40 on February’s hard courts.