However, in-form Berrettini and Hurkacz look for upsets 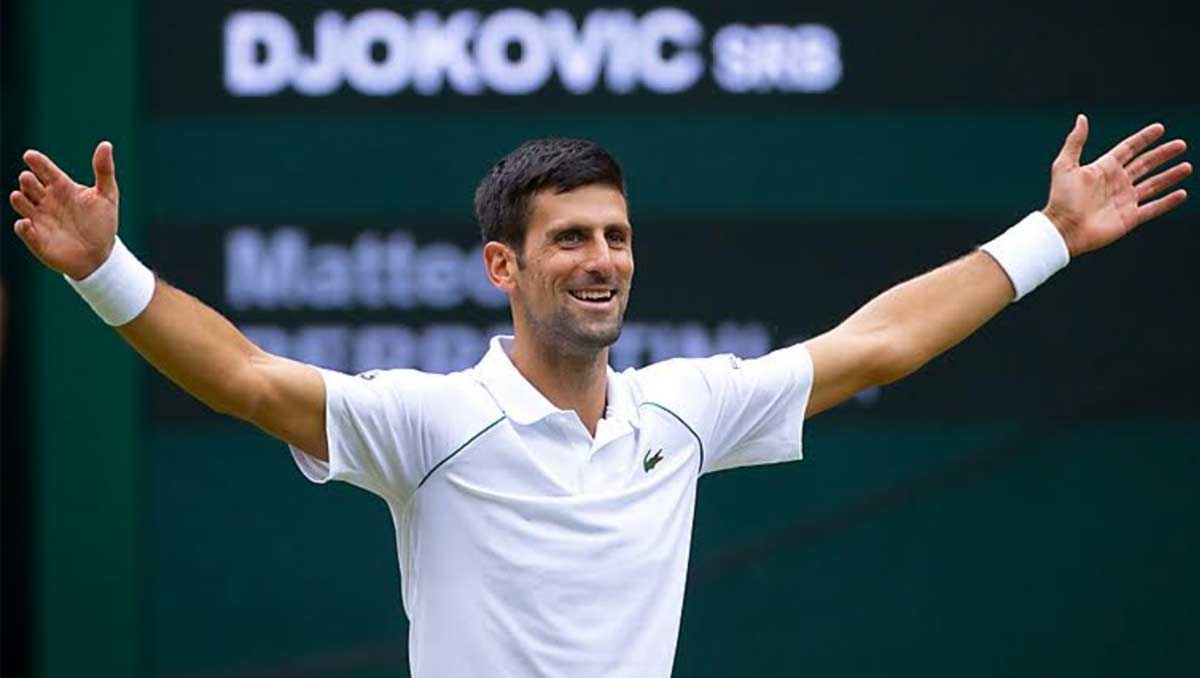 Daniil Medvedev finally broke the ‘big four’ deadlock at No1 after more than 18 years, but the first time he could top a Major draw as world No1 and top seed, world politics stepped in.

Wimbledon banned all players from Russia and Belarus after the invasion of Ukraine, and that meant Medvedev—plus his No8 compatriot Andrey Rublev.

Fate also intervened for the new the No2, Alexander Zverev, who rose to his career-high courtesy of a semi-final run at Roland Garros—but his ankle injury during that semi forced him out of Wimbledon. He too would miss his first Major as the world No2.

And so, once again, Novak Djokovic and Rafael Nadal are the top seeds, and thus scheduled to meet for a 60th time come final Sunday at Wimbledon. Their history, their status, and their rivalry in tennis would ensure the match’s own place in the record books, though remarkably, among 29 previous finals, only one has been played on Wimbledon’s centre court. The outcome marked the first of six Wimbledon titles for the Serb in a ground-breaking season of 10 titles, 70 match-wins, and the No1 ranking.

The last time the two super-stars met at Wimbledon was in the 2018 semi-finals, a marathon encounter of over five hours and five sets, and Djokovic went on to beat Kevin Anderson—himself the survivor of a six and a half hour semi-final against John Isner. Djokovic has not been beaten here since, winning twice more, and so arrives as defending champion.

Nadal has not won the title since his second in 2010, but in the interim he has gone on to outstrip both Djokovic and Roger Federer, on 20 Majors apiece, to reach a men’s record 22.

That many are therefore talking of either Nadal or Djokovic as favourites for the title again is a credit to their talent and their dedication—and just how high they have set the bar for almost two decades. And both are now around a decade older than everyone else in the top 12.

What of the other former champion, Andy Murray, who incidentally is also in that mid-30s generation? Well, a look at his Major appearances since his 2016 victory tells its own story, one of repeated hip surgeries, followed by Covid infection, and assorted niggling injuries.

But this year, one of the hardest workers in tennis has reached his first two finals after more than two years, and notably on the grass of Stuttgart this month, where he beat No5 Stefanos Tsitsipas before losing in three tough sets to Matteo Berrettini—who went on to win at Queen’s, too.

In short, no-one will count out the Briton whose love affair with these courts is written in his body language every year. That he has climbed back to No51 shows the dedication, but oh, the draw…

Murray is in the same quarter as Djokovic, but that is not his immediate hurdle. If he wins his opener against James Duckworth, he could face Isner, and in Round 3, one of just two other non-Wimbledon Major champions in the draw, unseeded wild card Stan Wawrinka. The other, incidentally, is No14 seed Marin Cilic.

The Swiss has faced a similar uphill task to Murray, working his way back into shape after foot surgery, which came after knee surgery. And Wimbledon has seldom produced his best results, though in practice this week, he has looked more enthusiastic about attacking the front of the court—and his serve and baseline power will always deliver.

Not that Wawrinka is assured of reaching even the second round after drawing one of the young players to have made a real impression over the last year or so, Jannik Sinner, the No10 seed and winner of four titles last year. Thus far, though, the 20-year-old is short of experience on grass.

Still not tough enough? Then the fourth round promises the young player who has made the biggest impression this year, Carlos Alcaraz. The teenager was ranked 75 when he made his debut here last summer, but has gone on to win five titles, including both the Miami and Madrid Masters.

He too, though, is short of grass preparation and, perhaps more worrying, has been wearing heavy support on his playing arm since arriving on Wimbledon’s grass. He also has his share of tough opponents in this deadly eighth: First Jan-Lennard Struff, then Tallon Griekspoor or Fabio Fognini, with his first seed being Oscar Otte, who made the semis in Stuttgart and Halle.

So who emerges to take on Djokovic in the quarters is impossible to predict. The Serb, for his part, has got the easier section, though unseeded players like Thanasi Kokkinakis and Tim van Rijthoven, winner in ‘s-Hertogenbosch, float here.

At the start of last year, Cam Norrie was ranked 74, then won two titles from six finals—among them the Masters title in Indian Wells—and has maintained a top-12 position ever since. His grass prep this year has been limited, while at Queen’s, where he was runner-up last year, the lower ranked Ryan Peniston made a mark, and another Brit, Jack Draper, made the semis in Eastbourne. Indeed there is a solid clutch of young Britons closing on the top 100, but for now, Norrie is home torch-bearer for the men.

He could, indeed, meet Peniston in the third round, though former Wimbledon semi-finalist Grigor Dimitrov is the next seed. And surely one of the favourites to reach the final few days, No7 seed Hubert Hurkacz, is lined up for the fourth round. The Pole reached the semis last year, and just won the Halle 500 title, though he has a tricky opener against Alejandro Davidovich Fokina, who missed out on a seeding by just one spot.

From this quarter, it is No3 Casper Ruud who is scheduled to advance after the Norwegian reached the Roland Garros final, but he has yet to win a match in two previous visits to Wimbledon. Indeed, he has only won two matches on grass in his pro career on grass, and looked unsure of his tennis in an early Queen’s exit. More likely to advance from this section, perhaps, is No23 seed Frances Tiafoe.

While Nadal may be the name on everyone’s lips in the bottom half, the man with the strongest record on grass over the past year or so is No8 seed Matteo Berrettini. Runner-up here last year, he has already defended both his Stuttgart and Queen’s titles. He loves the grass, and is well rested after missing the clay season to have hand surgery.

He is in No4 seed Tsitsipas’s quarter, and looks a secure bet to reach the fourth round over the likes of Diego Schwartzman and Alex de Minaur. The quarters will be a sterner test, not only with Tsitsipas, who has just won the Mallorca title, but also with Roberto Bautista Agut, the runner-up in Mallorca and another former Wimbledon semi-finalist.

Perhaps the most dangerous unseeded man here is Nick Kyrgios, a semi-finalist in both Stuttgart and Halle—and capable of hitting anyone off the court if he is fit and focused.

Can Nadal make it three Majors in a row?

Rafael Nadal is projected to meet Felix Auger-Aliassime in the quarter-finals, which would be a rematch from Roland Garros, where Nadal won a five-set battle. For what it’s worth, the young Canadian beat Nadal in a warm-up grass exhibition event at Hurlingham this week, and he has twice before made the final of Stuttgart. However, he first faces the exciting serve-and-volley Frenchman, Maxime Cressy, who reached the final in Eastbourne this week.

It was a foot problem that saw Nadal miss Wimbledon last year, and that same condition has needed near-constant treatment for pain throughout 2022. Yet he has prevailed, starting the year with a 20-match winning streak, and looking to win the first three Majors of the year for the first time—as well as extend his tally to a men’s record of 23.

He will have to hit the ground running against the fast-rising Francisco Cerundolo, ranked 42 from 127 at the start of the year. Then big-serving Sam Querrey is a two-time Wimbledon quarter-finalist, and seeds Botic van de Zandsculp, semi-finalist at Queen’s, and Cilic, runner-up at Queen’s and also a finalist at Wimbledon, are dangerous.

So the quarter is a test for Nadal and his ambitions—but then it is an even bigger test for all the rest.

There are nine British men in the singles draw, two of them seeded: No9 Norrie and No32 Dan Evans. Draper and Murray got direct entry to the main draw, while the rest were awarded wild cards: Jay Clarke, Peniston, Liam Broady, Paul Jubb, and Alastair Gray.

No2 Zverev, No23 Gael Monfils

No1 Medvedev, No8 Rublev, No22 Karen Khachanov

Top half, first quarter, No1 Djokovic

Top half, second quarter, No3 Ruud

Bottom half, third quarter, No4 Tsitsipas

Bottom half, fourth quarter, No2 Nadal

MORE: Wimbledon 2022: The stage awaits – but who will take the spotlight in this out-of-kilter year?