By The Sport Review
Updated on Tuesday 19 July 2022 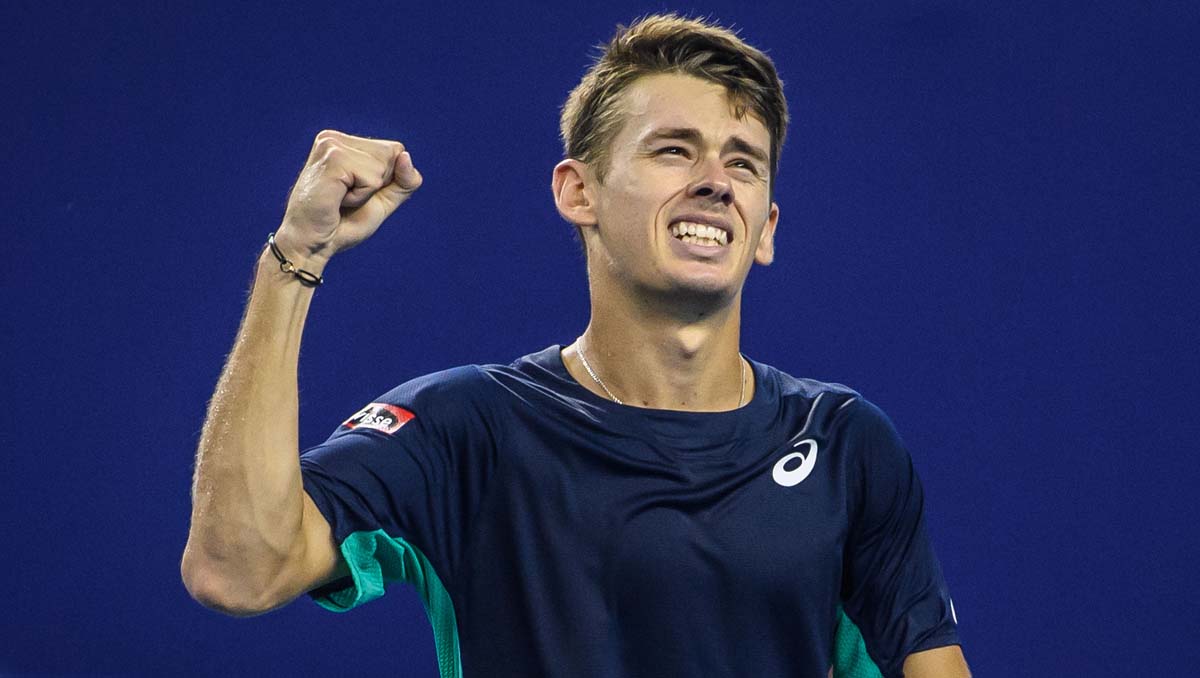 Alex De Minaur is an Australian tennis player. He made his ATP Tour main draw debut at the Brisbane International in January 2017.

The 23-year-old was born in Sydney in Australia and began playing tennis when he was around four years old after his mother signed him up for lessons.

When he was five, he moved to Alicante and split his time growing up between Spain and Australia.

He was a strong junior player and reached number two in the junior rankings and won the 2016 Australian Open boys’ doubles title.

His favourite surface is grass, his preferred shot is backhand and his favourite tournaments are the Australian Open and Wimbledon.

So, what do we know about De Minaur’s journey to becoming the talented tennis player he is today? This is his story.

Alex De Minaur was born on 17 February 1999 in Sydney, Australia. His father, Anibal, is Uruguayan, and his mother mother, Esther, is Spanish. He has an older brother named Dominic and three younger siblings: Daniel, Cristina and Sara.

He moved to Alicante when he was five years old and split his time growing up between Spain and Australia. He attended primary school in Spain and finished high school while travelling on the tour. 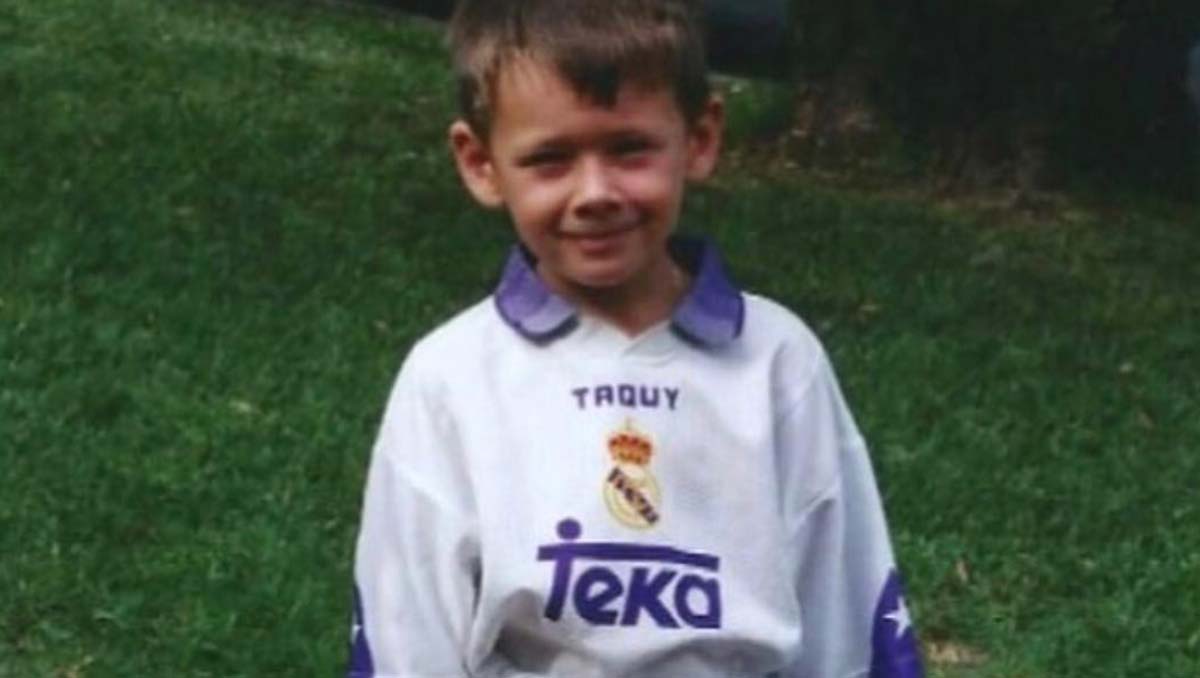 Alex has dual Australian and Spanish citizenship. “I used to represent Spain but I always felt I was Australian,” De Minaur said “As soon as we moved back here again that was the first thing I wanted to do — play for Australia.”

De Minaur began playing tennis when he was around three-and-a-half to four years old after his mother signed him up for lessons.

He was initially coached by Kerry Dock in Carss Park in Sydney’s south. “I normally don’t take kids that young but he was already hitting the wall on the garage every day for three hours,” Dock said. “He would have been the youngest ever. Alex was the perfect student.”

De Minaur speaks English, Spanish and French, and his nickname is Demon. 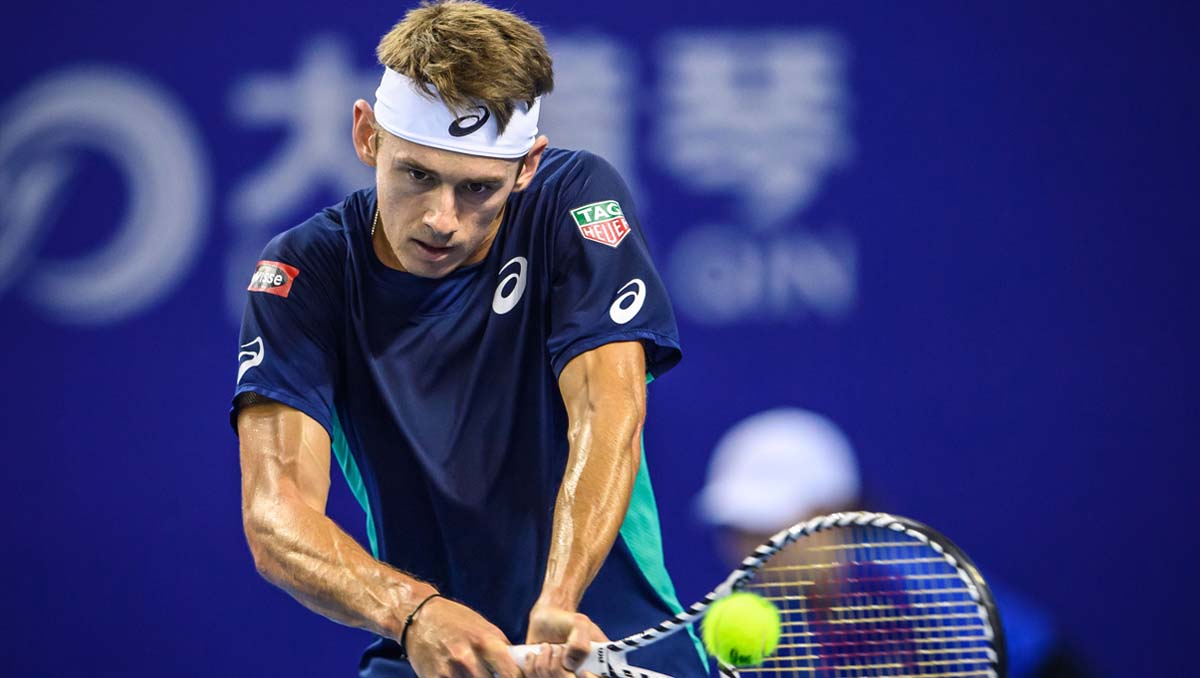 De Minaur was a strong junior player and peaked at number two in the world junior rankings in February 2016. He won two singles titles as a junior player – both in 2014.

He tasted grand slam glory as a junior in doubles, triumphing at the 2016 Australian Open with partner Blake Ellis. The pair beat eighth seeds Lukas Klein of Slovakia and Czech Patrik Rikl 3-6 7-5 12-10 in the final.

“It’s an amazing feeling, we’ve worked pretty hard for this and it’s just been great to get out there and have a tough match to finish with so many ups and downs, the crowd out there was just amazing,” said De Minaur, who was 16 years old at the time. “I can’t put it into words, being a Grand Slam Champion, it’s really exciting because I get to do it with a mate.”

De Minaur made his ATP Tour main-draw debut at the Brisbane International in January 2017. After being handed a wildcard into the qualifying draw, he beat Mikhail Kukushkin and Frances Tiafoe to make it to the main draw, where he lost to Germany’s Mischa Zverev in straight sets.

He then made his grand slam main-draw debut at the 2017 Australian Open, and he won his first-round match against Gerald Melzer in three sets, before losing to Sam Querrey in round two.

In 2018, De Minaur enjoyed something of a breakthrough season. He enjoyed his best run at a grand slam tournament up until that point when he reached the third round, beating Marco Cecchinato and Pierre-Hugues Herbert, before losing to Rafael Nadal in round three.

He then followed that run at SW19 up by reaching the third round of the 2018 US Open, beating Taro Daniel and Frances Tiafoe before losing to Marin Cilic in five sets in round three.

De Minaur claimed his first ATP singles title in January 2019 at the Sydney international when he was 19 years old. He beat Italy’s Andreas Seppi 7-5, 7-6(5) in the final to claim the trophy on home soil.

“It’s surreal. I couldn’t think of a better place to get my first win,” said De Minaur claiming his first title. “It’s been tough, because I have played a couple of finals and things haven’t gone my way. To finally be able to take that step further and get my first win, it’s something that’s really special in front of friends and family and on the courts I grew up [on]. [These are] definitely memories that are going to last forever.” 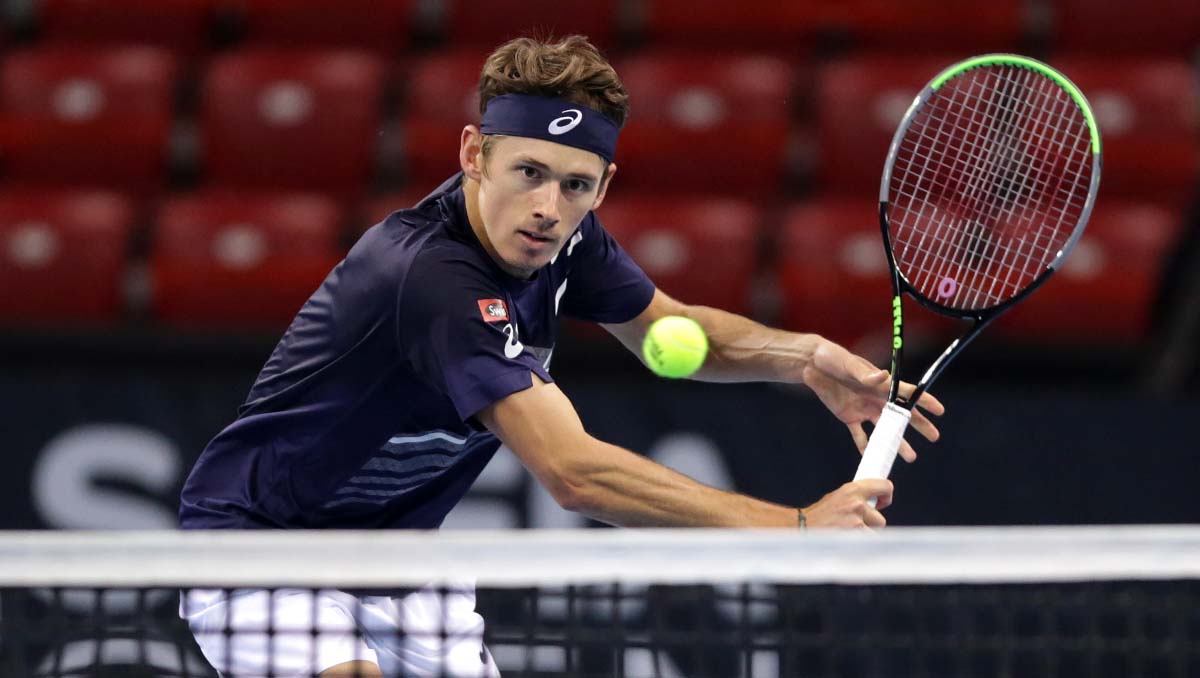 De Minaur became the youngest winner in Sydney since his mentor Lleyton Hewitt claimed the title back in 2001.

De Minaur continued to make impressive progress and he reached the third round of the 2019 Australian Open, where he lost to Rafael Nadal.

After falling in the second round of Wimbledon, De Minaur bounced back and claimed his second career title in Atlanta, where he beat home favourite Taylor Fritz 6-3, 7-6(2) to seal the trophy. En route to victory in Atlanta, he lost a mere seven first-serve points. 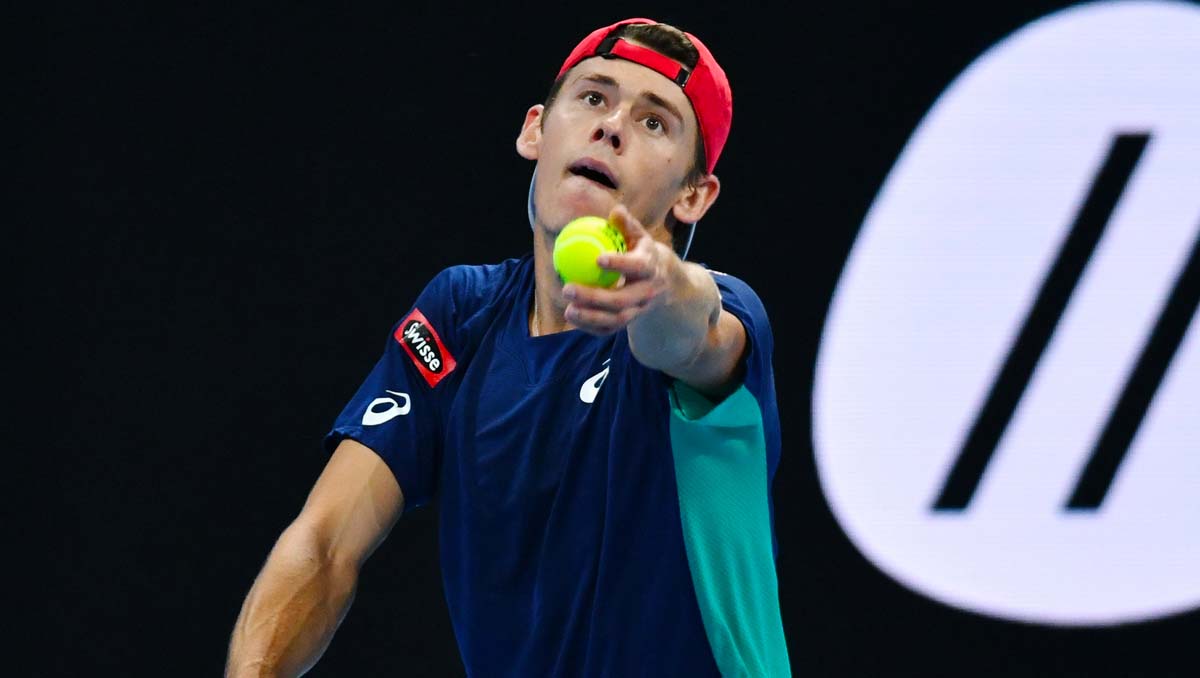 “This one is really special to me,” De Minaur said afterwards. “I felt like I really needed this. To start the year with a bang and then be slowed down by injuries… you expect your level to be right there once you come back, but you have to slowly grind your way back.”

De Minaur’s third career title arrived in September 2019, when he beat Adrian Mannarino in the final of the Zhuhai Championships in China.

In 2020, De Minaur reached the quarter-finals of a grand slam for the first time in his career at the US Open. He beat the likes of Richard Gasquet and Vasek Pospisil en route to the last eight, where he lost to Dominic Thiem in straight sets.

De Minaur claimed his fourth career title at the Antalya Open in Turkey in January 2021, overcoming Alexander Bublik, who retired from the match, in the final.

He enjoyed a strong grass-court season in 2021 and claimed his first-ever grass title at the Eastbourne international, defeating Italy’s Lorenzo Sonego in the final.

Speaking after claiming the fifth title of his career on England’s south coast, De Minaur said: “I had to pull through all my mental strength I had. I had to tell myself to try and be a bit more aggressive and go to win that match, not just wait for my opponent to lose it, because he was not going to do that. I am very happy to have played more aggressively in the important points and stay in there, as it was not an easy match. I am happy to have my fifth title.”

His victory in Eastbourne propelled him up to a then-career-high ranking of number 15 in the world. 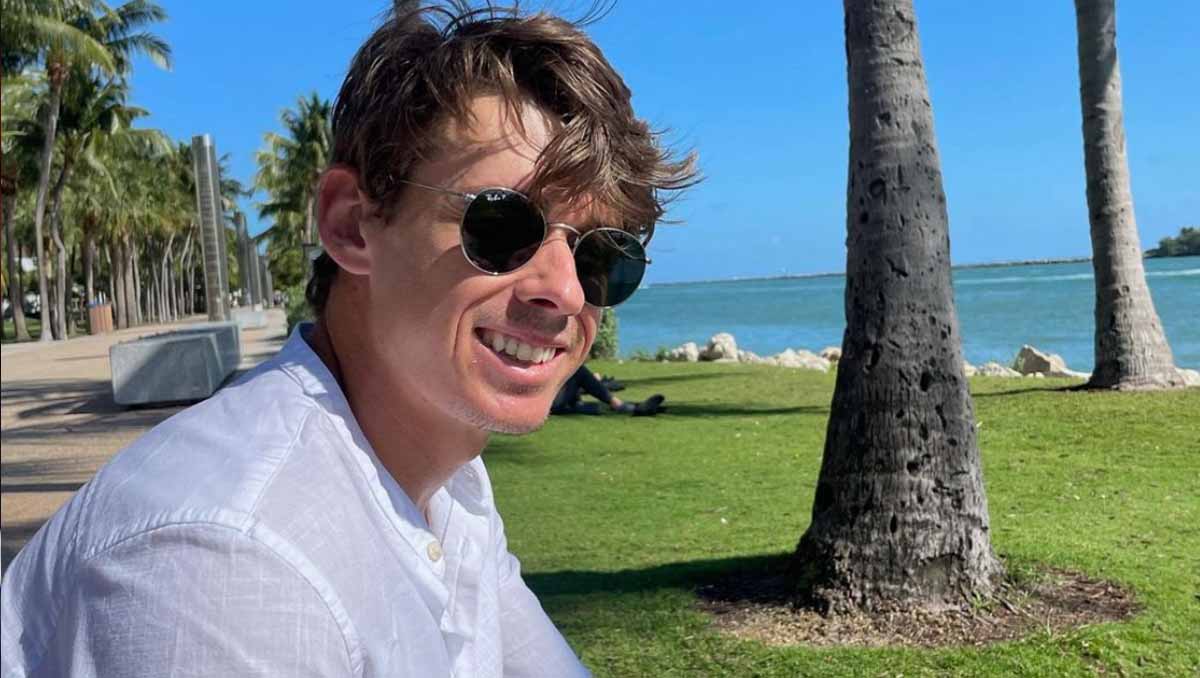 De Minaur has a tattoo of ‘109’ on his chest because he was 109th player to represent the Australian Davis Cup team.

Away from tennis, he enjoys playing golf and even says he would be a golfer if he wasn’t a tennis player.

His favourite sports team is Real Madrid because his mother is a longtime fan of the club. He also supports NSW State of Origin rugby team.

His former coach Kerry Dock, speaking about De Minaur in September 2020: “Don’t bet against Alex because he’s better than he looks. He’s constant, he doesn’t have big shots but he’s like Lleyton Hewitt. He grinds away and is just constant.”

Katie Boulter, speaking about De Minaur in 2022: “He’s someone that I have a lot of admiration for on and off the tennis court. He is the epitome of a fighter and someone that goes out and gives their all every single day. That’s what I aspire to be like. I feel like to have that around me and my team, it really helps me because I can push myself. He helps me do that. He is probably one of the hardest-working guys out there. I try to take a leaf out of his book because it really is impressive. I’m very lucky to be in the position I am, that I get to see it day in, day out.”