By The Sport Review
Updated on Tuesday 3 May 2022 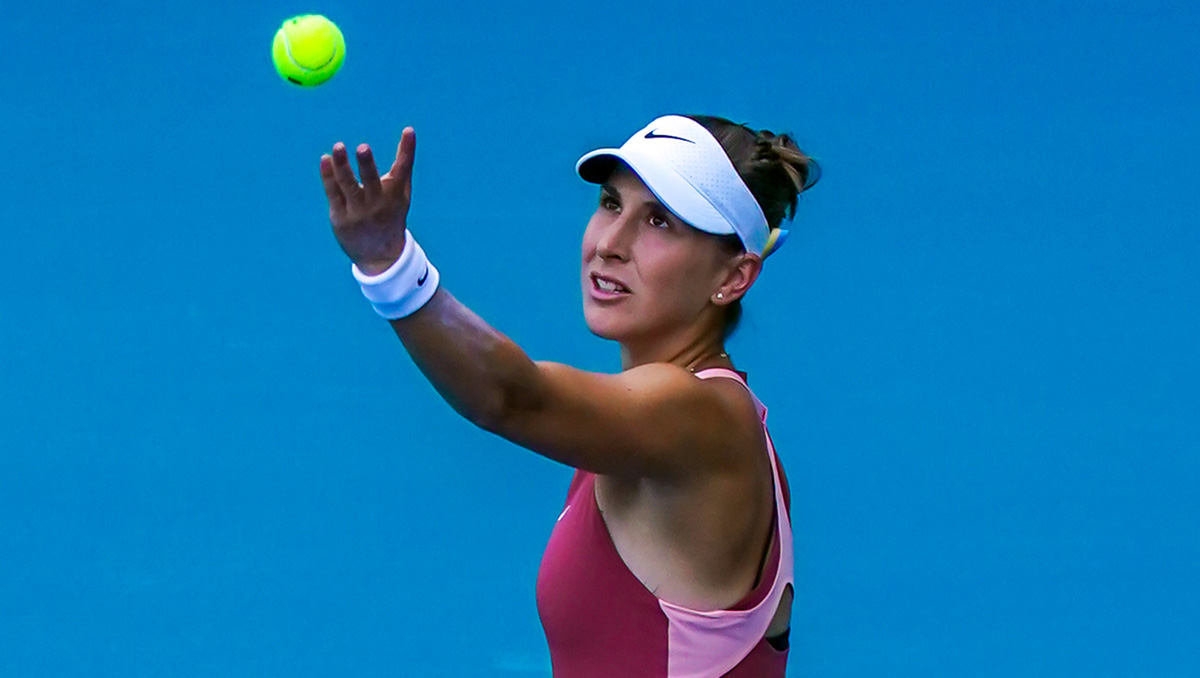 Belinda Bencic is a Swiss tennis player. She has won her first WTA Tour title in 2015, and claimed a gold medal in the women’s singles at the Toyko 2020 Olympics.

Born in Flawil, Switzerland to Czechoslovakian parents, Bencic began hitting tennis balls at the age of two and started training regularly with her father soon after.

After turning professional in 2012, Bencic won her first WTA singles title in June 2015 when she was 18 years old, beating Agnieszka Radwanska in the Eastbourne International final.

Since then, Bencic has continued her rise up the rankings and has added numerous other titles to her collection.

But how much do you know about Bencic’s story and journey en route to becoming the respected professional tennis player she is today? This is her story.

Belinda was born on 10 March 1997 in Flawil, Switzerland, to parents Dana and Ivan. Both of her parents were both born in Czechoslovakia but later emigrated to Switzerland.

Sport certainly runs in the Bencic family. Her father Ivan was a professional hockey player, while her mother was a talented handball player. 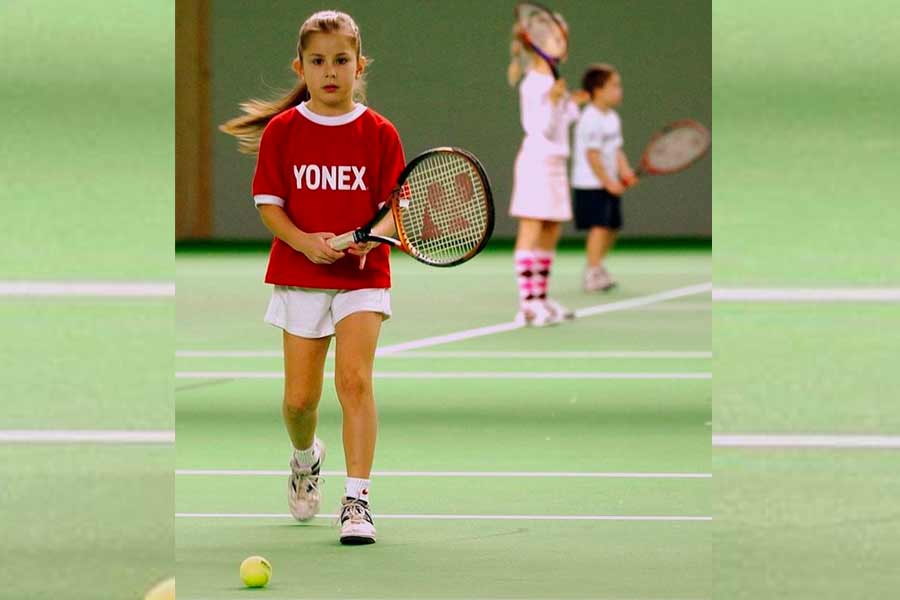 Bencic began hitting tennis balls when she was just two years old. Her father, who himself was a recreational tennis player, then began to train with her on a regular basis when she was four.

She played her first tennis match at a national tournament when she was just four years, losing 6-0 6-0 to an opponent six years older than her.

“My dad always told me that when I play older opponents, which I always did, that if I won just two games in each set then I already won in my mind. So sometimes I would come to the net and say ‘I won!’ And the girl would say ‘No, you didn’t.'”

When she was five years old, Bencic’s father reached out to Melanie Molitor, the mother and coach of world number one Swiss tennis player, Martina Hingis, for coaching advice. Bencic then started working with Molitor once a week for around a year.

Aged six, Bencic also spent six months at Nick Bollettieri’s academy in Florida, where she won a number of under-10 tournaments. 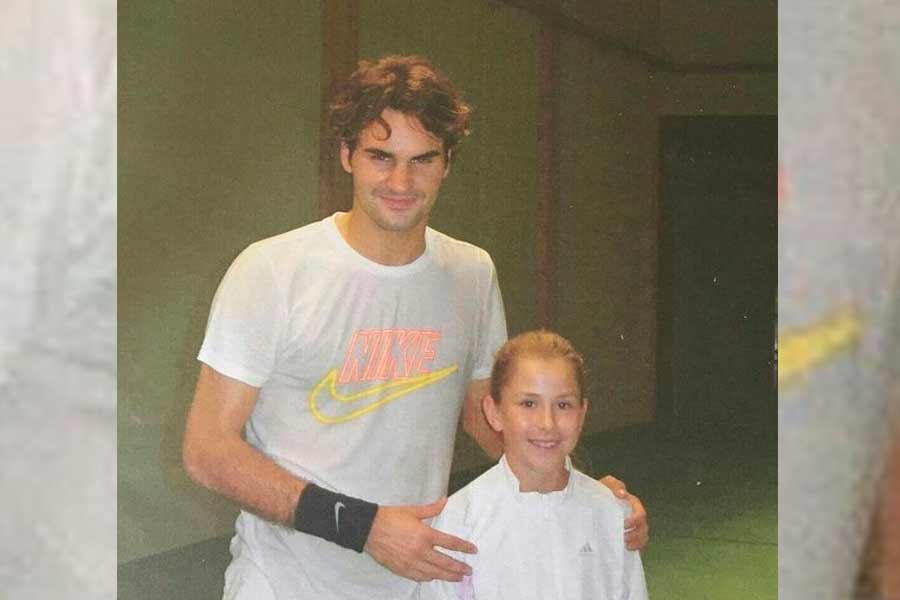 When she was seven years old, Bencic’s family moved to Swiss municipality Wollerau, where Molitor had just opened her own academy, so that she could train there every day. She continued to work with Molitor through her teenage years.

Bencic turned professional in 2012, and played her first WTA main tour match at Luxembourg in that year.

Bencic enjoyed a meteoric rise up the rankings soon after making her debut on the WTA Tour. She broke into the top 200 for the first time in 2013 and finished the year at number 184. That year, she won the Wimbledon Girls’ Singles title. 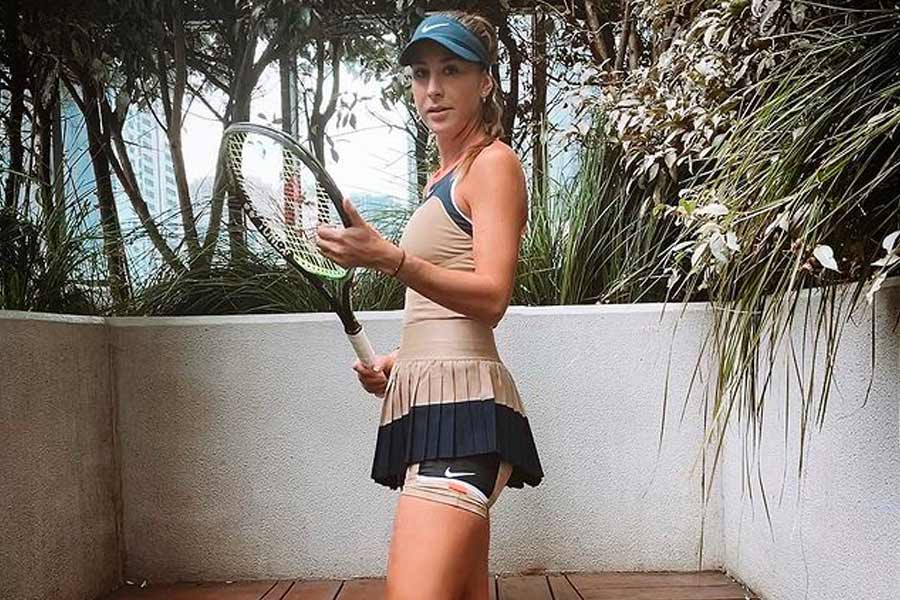 She made her Grand Slam debut at the 2014 Australian Open after making it through qualifying and securing a first-round win over Kimiko Date-Krumm, before losing to eventual champion Li Na in the second round.

Bencic claimed her maiden WTA title in June 2015 at the Eastbourne International tournament in England when she was 18 years old. She beat the 13th-ranked Agnieszka Radwanska 6-4 4-6 6-0 to claim the trophy and a victory which propelled her into the top 20 in the world.

In 2016, she made it to the fourth round of the Australian Open, where she lost to Maria Sharapova.

After a string of injury issues, which included surgery on a wrist problem in 2017, it wasn’t until 2019 that she won her next career WTA titles. 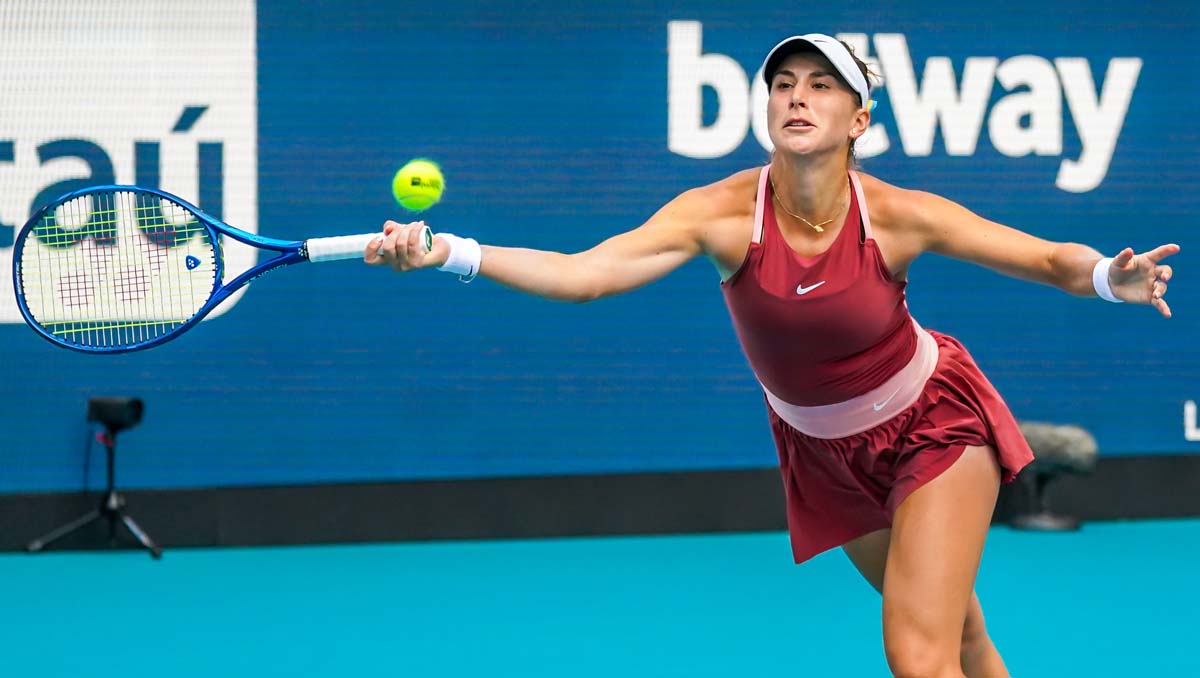 First, she triumphed at the Dubai Championships, beating Petra Kvitova 6-3 1-6 6-2 in the final. Then she won the Kremlin Cup title, beating Anastasia Pavlyuchenkova 3-6 6-1 6-1 in the final.

Her next singles title would come at the Toyko 2020 Olympics, held in the summer of 2021.

She reached the quarter-finals of the 2021, where she lost to eventual champion Emma Raducanu in straight sets. 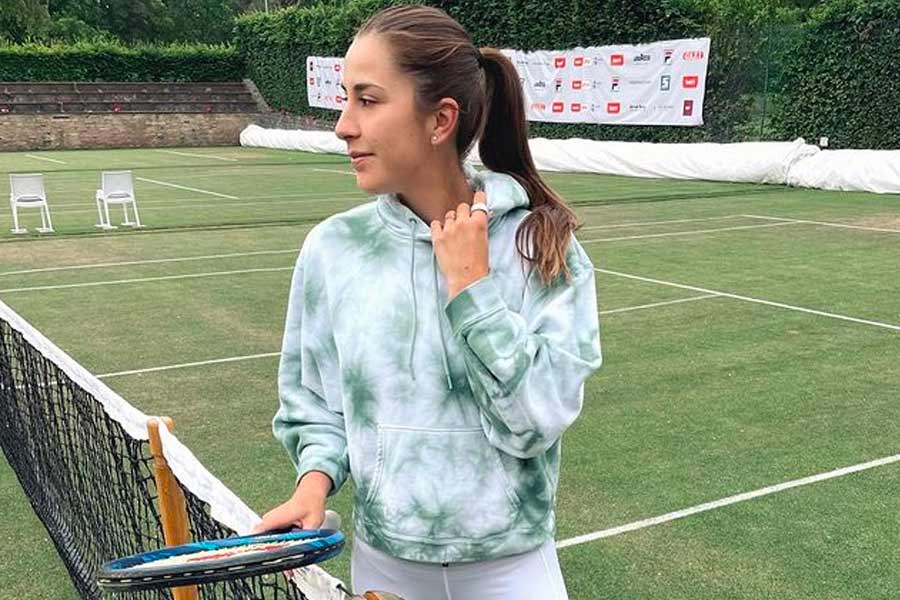 At the Toyko 2020 Olympics, Bencic beat Jessica Pegula, Misaki Doi, Barbora Krejcikova and Anastasia Pavlyuchenkova to reach the semi-finals. She beat Elena Rybakina to reach the final and then Marketa Vondrousova 7–5 2–6 6–3 in the final. In doing so, she became the first Swiss woman to win the gold medal in singles.

Speaking after her historic achievement in Japan, Bencic underlined the importance of what the gold medal meant to her. 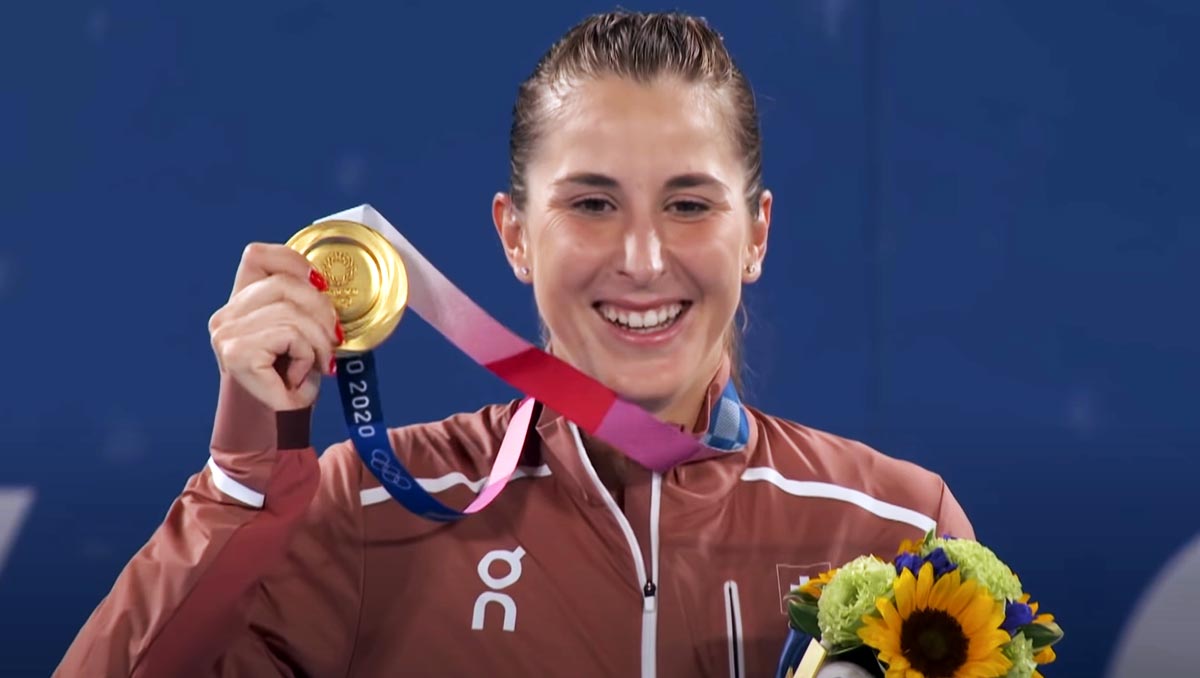 “I genuinely feel that now I have nothing to prove to anyone because I kind of achieved my dream and fulfilled my dream,” Bencic told Tennis Majors in August 2021.

“I didn’t feel like I had to prove it to people. Because I learnt this very fast; that when you are a good player, then people will always say, oh, I always knew it. And when you are down, no one really cares about you and how you feel or how you do and people just write you off. 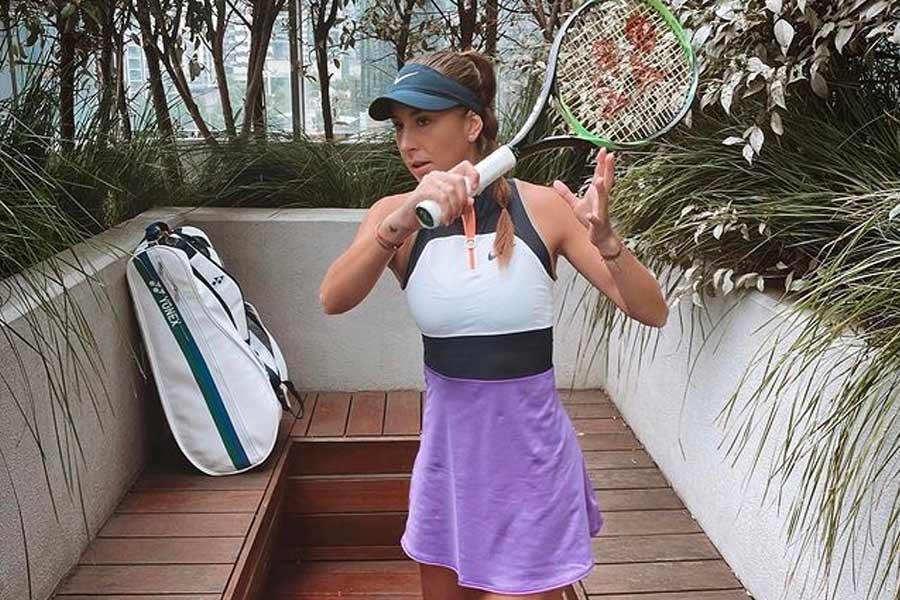 “So first thing, I do not care about what other people think and I feel like I’m doing well in it. But I wanted to prove to myself, of course, because you work all your life for something and winning a grand slam or winning Olympics or being number one in the world is one of the three things that was my dream, or is my dream.”

Bencic also revealed how the support of Roger Federer helped her during her remarkable run at the Tokyo Olympics. 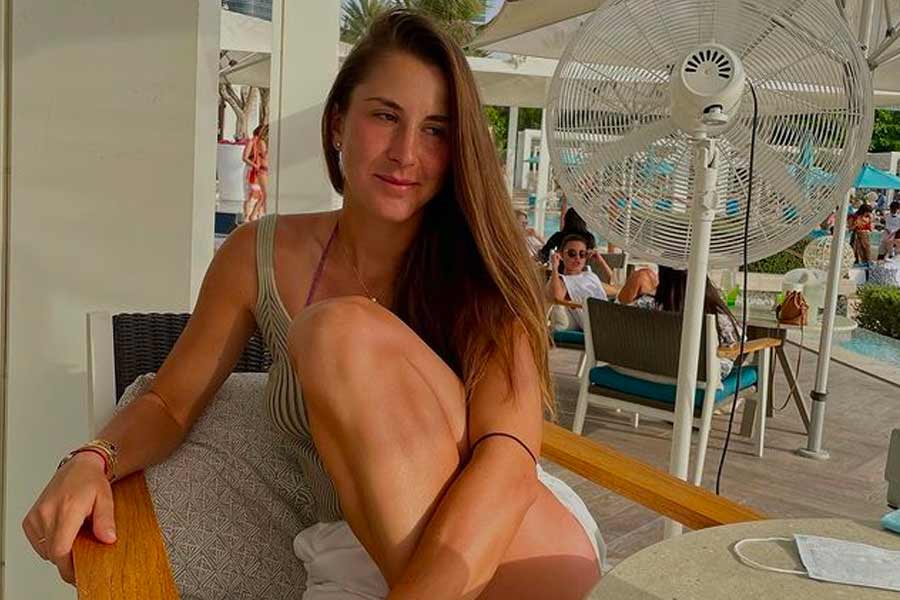 “He [Federer] was very genuinely happy and it made me also very happy,” Bencic said in the same interview. “Every match he was cheering for me and sending me nice messages. Just generally, even when you’re not asking him for tips, just talking normally, you can learn so many things (talking about) how you feel in this situation, how was it for you… It’s so much for me already and so many people don’t have that so I would call myself very lucky to have this kind of support.”

After reaching the semi-finals of the 2022 Miami Open, where she lost to Naomi Osaka, Bencic continued her strong form at the clay-court WTA tournament in Charleston.

Bencic won the WTA Charleston title – the sixth singles crown of her career – with a battling 6-1 5-7 6-4 win over Ons Jabeur two hours and 35 minutes in the final.

“I’m super proud to win the first title on clay,” Bencic said after the match. “I think it was a week where I was fighting. I was two points away from the exit in the first round, and I feel like this is how you win the tournament.” 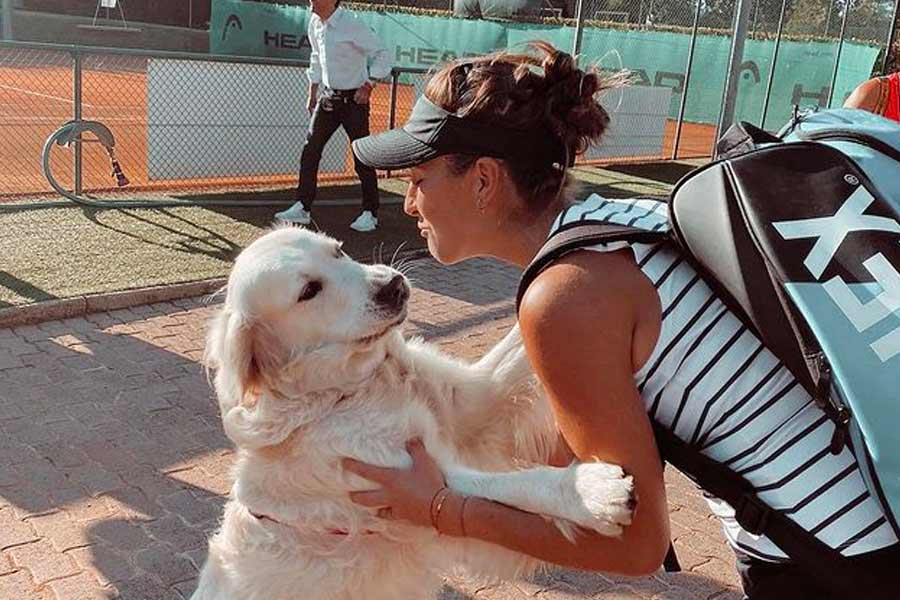 When she’s not on tour, Bencic says that she enjoys spending her time doing “normal things”.

She enjoys meeting with friends, going out, going to the movies and reading books, especially crime novels.

Emma Raducanu was full of praise for Belinda’s talent after her US Open quarter-final win over the Swiss in September 2021.

“I’m so pleased to have come through that,” Raducanu said after the match. “Belinda is such a great opponent and she’s an Olympic gold medallist, which is probably one of the biggest events in sport. “She’s a great player, and I knew it’s going to be an extremely difficult match. It took me some adjusting at the beginning to get used to her ball speed [and] how aggressive she was. Once I adjusted, I settled in. I didn’t over-press as much.” 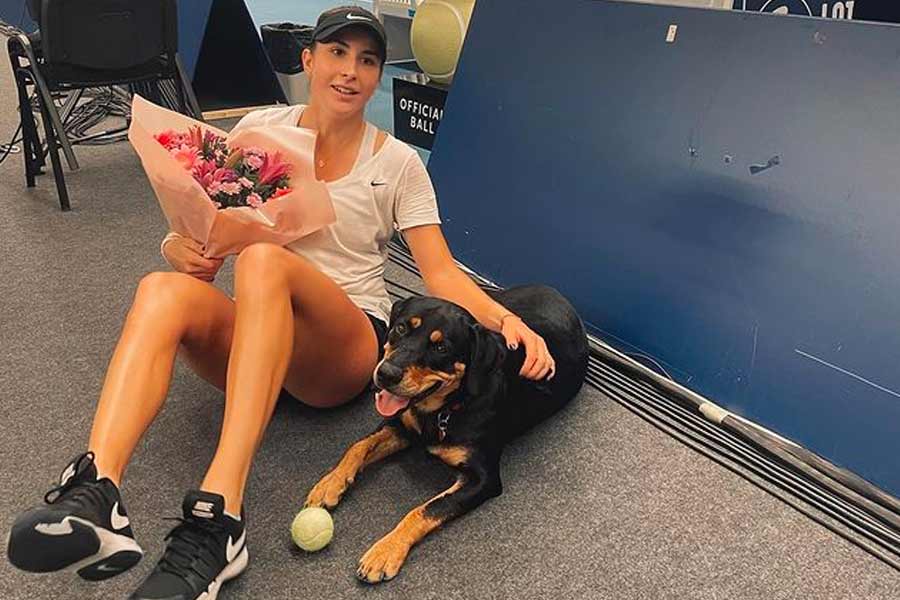 Belinda’s father Ivan Bencic on being her coach after her arrival at the 2019 WTA Finals in Shenzhen.

“I think, like a father and coach, you had plus and minus. The plus is that you know your player, your child better than other people. All the commitment around her helps her to come back to her tennis. She has to do most of the work, of course. I’m just a key to help her where I can. Also that she’s very fit, with her physical coach. This all together in a package is the result that she’s here [at the WTA Finals].”

Martina Hingis on Bencic’s ability as a young prodigy: “The technique, my mum [Melanie Molitor] puts a lot of attention to that. So Bencic has a great backhand as well. But also she’s stronger, so she can work with other weapons than I had. Maybe I was a little better at moving but when she hits a shot it can be a winner. She’s hitting a lot more winners than did I. So it’s different a little bit.”