By The Sport Review
Updated on Friday 21 January 2022

Bruno Fernandes is a Portuguese footballer who plays as an attacking midfielder for Manchester United.

The 27-year-old is a talented attacking playmaker who has showcased his talent on the biggest stages in recent years.

Fernandes began his senior professional career at Italian club Novara and later made the switch to Serie A side Udinese.

He then earned a transfer to Sampdoria, before returning to his native homeland to play for Sporting Lisbon.

Fernandes signed for Manchester United in January 2020 and quickly became one of the Red Devils’ most important attacking players.

He has represented Portugal at various youth levels and made his debut for the senior team at international level in 2017.

So, what do we know about Fernandes’ journey towards becoming the impressive playmaker he is today? This is his story.

While Fernandes was playing in the Boavista youth set-up, his father opted to move to Switzerland in search of employment. Initially, his father Jose wanted to bring his family with him, but Fernandes managed to convince his parents to let him stay in Portugal and continue playing football, with his mother remaining behind with him.

In mid-2012, Fernandes caught the eye of a scout from Italian side Novara during an Under-19 fixture and he ended up sealing a move to the club in August of that year.

Fernandes was quickly promoted to the first team of the Serie B side and was a regular fixture in the side in the 2012–13 season, helping his team to a fifth-place finish and the promotion play-offs

Following an impressive debut season in Italy, Fernandes secured a transfer to Serie A side Udinese, where he would spend three years, scoring 10 goals in 86 games in the Italian top flight. 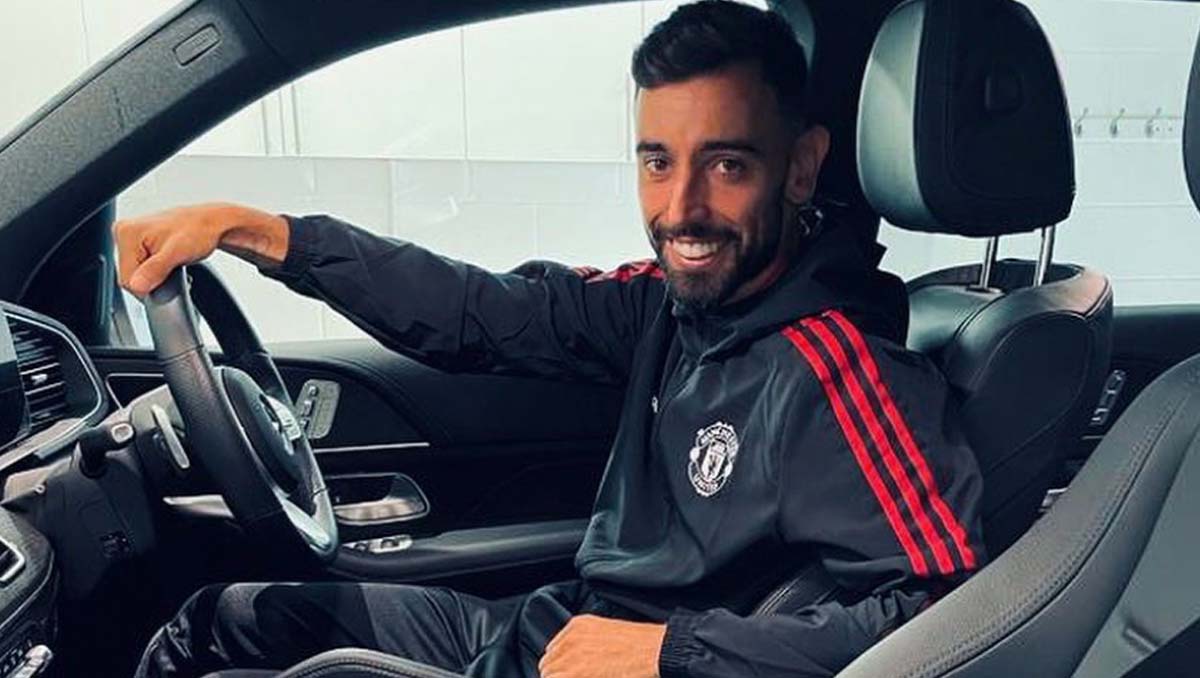 In the summer of 2016, he sealed a move to Sampdoria on loan with an obligation to buy. He scored five goals in 33 Serie A games to help them to finish in 10th place in the table.

Fernandes returned to his native homeland in the summer of 2017 when he secured a move to Sporting Lisbon on a five-year contract, in a deal reported to be worth around €8.5m plus bonuses.

He made his debut for Sporting Lisbon on 6 August 2017 in a 2–0 home victory against Desportivo das Aves.

He enjoyed a sparkling debut campaign at Sporting Lisbon, netting 16 goals in all competitions and making an impressive 20 assists.

In July 2018, Fernandes signed a new and improved contract with Sporting Lisbon that had a release clause set at €100m.

The 2018-19 season ended up being a fantastic one for Fernandes. The talented playmaker scored an incredible 33 goals in all competitions, making him the highest-scoring Portuguese midfielder in a single season of all time. He was also named as the Primeira Liga Player of the Year for the second successive year.

Fernandes enjoyed a strong start to the 2019-20 season, scoring 15 goals in 28 games in all competitions for Sporting Lisbon before a big-money transfer to Manchester United beckoned.

Manchester United confirmed they had agreed a deal to sign Fernandes from Sporting Lisbon on 29 January 2020, for a fee believed to be worth up to €80m, with the playmaker initially signing a five-and-a-half year contract with the Red Devils.

Speaking on the day of his unveiling as a Manchester United player, Fernandes could not hide his delight at signing for the Red Devils, pointing to Cristiano Ronaldo’s development at the club following his own move from Sporting Lisbon in 2003.

“My love of Manchester United really started when I used to watch Cristiano Ronaldo play and ever since then I have been a big fan of this great club,” said Fernandes upon signing for Manchester United.

“For me to now play for Manchester United feels incredible, I have worked hard to get to this moment and I can promise the fans that I will give everything for the badge to help bring us more success and trophies.”

Fernandes made his debut for Manchester United on 1 February 2020 when he played the full 90 minutes in a goalless draw with Wolverhampton Wanderers. He scored his first goal for the Red Devils on 23 February 2020, netting a penalty in a 3-0 victory over Watford at Old Trafford.

Fernandes enjoyed a strong start at Old Trafford, even if his first campaign at the club was disrupted due to the Covid-19 pandemic. He finished the season with eight goals and seven assists in 14 Premier League games. In total, he scored 12 goals in 22 games in all competitions for the Red Devils in the 2019-20 season.

Fernandes continued his good form during his first full season at Manchester United, playing under then-manager Ole Gunnar Solskjaer. The Portuguese playmaker hit a total of 18 goals and made 12 assists in 37 Premier League games as the Red Devils finished second in the table behind Manchester City. 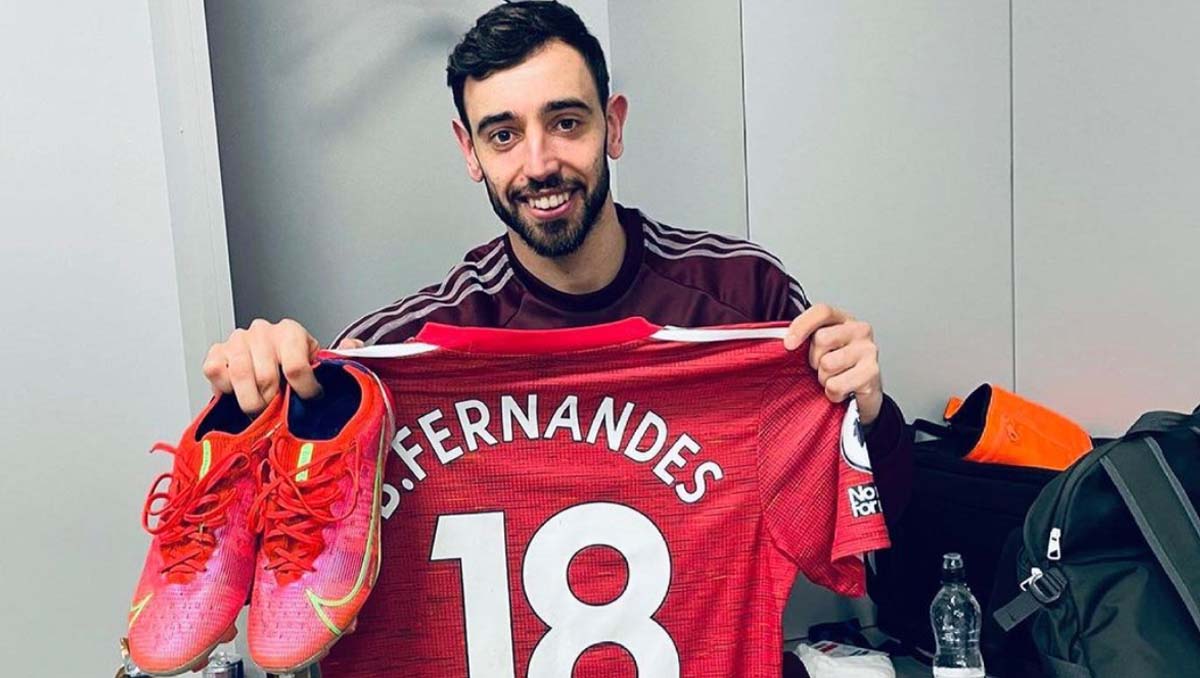 He also scored five times and made four assists in nine Europa League games to help the Red Devils reach the final, where they eventually lost on penalties to Villarreal on 26 May 2021.

Fernandes kicked off the 2021-22 campaign in superb fashion as he netted a hat-trick in the 5-1 thrashing of Leeds United at Old Trafford on the opening weekend of the season.

Bruno Fernandes married his wife – childhood sweetheart Ana Pinho – back in 2015. The couple have two children – a daughter and a son – together.

Ana has regularly shared photographs of herself in the stands at Old Trafford supporting Fernandes during his games for Manchester United on social media. 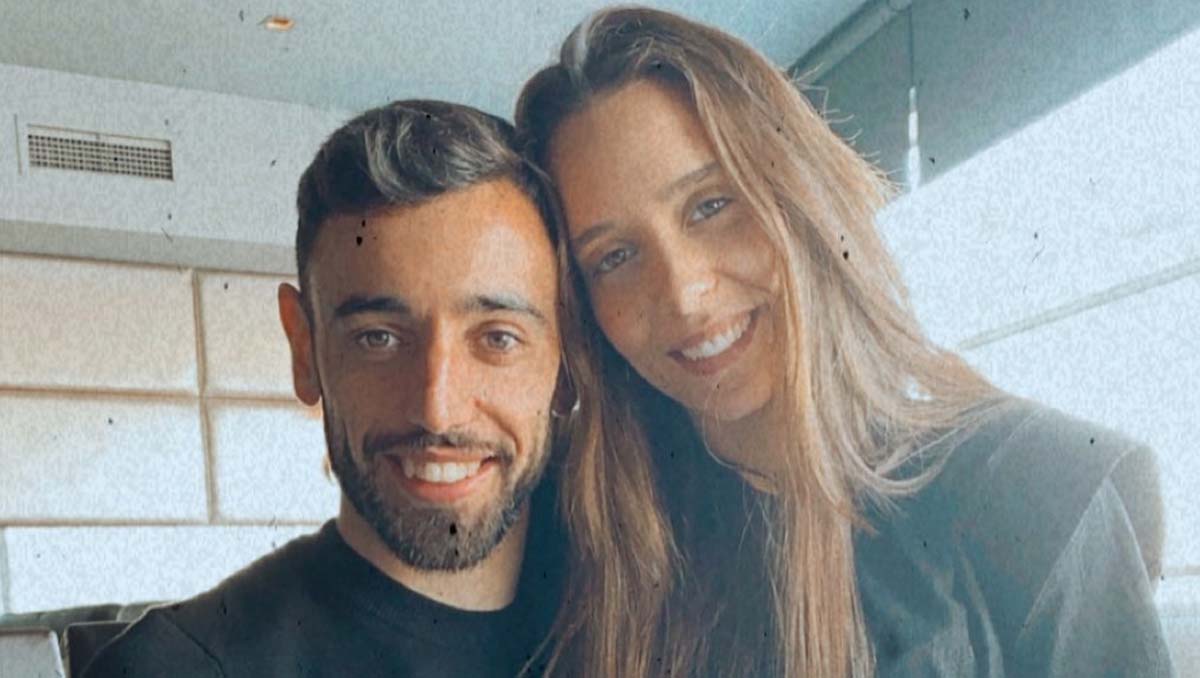 Fernandes is fluent in Portuguese, English, Italian and Spanish.

Former Manchester United boss Ole Gunnar Solskjaer speaking about Fernandes following his move from Sporting Lisbon in January 2020: “We have been tracking Bruno for many months and everyone here has been tremendously impressed with all his attributes and what he will bring to this team.

“Most importantly he is a terrific human being with a great personality and his leadership qualities are clear for all to see. Bruno’s goals and assists stats speak for themselves, he will be a fantastic addition to our team.”

Brazilian forward Raphinha on his friendship with his former Sporting Lisbon team-mate Bruno Fernandes, speaking in August 2021: “Our friendship began even before we became teammates at Sporting. Once he knew that I was going there, he texted me saying he was looking forward to playing with me. I know that I would have arrived at the club in a very timid way if I hadn’t known anyone there before, so he really helped me settle quickly.

“Bruno has helped me so much, man. In Portugal we would talk a lot and go out for meals. When I went to Rennes, he advised me. The guy is so clever. When I was on the plane to Leeds, he texted me saying my style would fit the league. He was right again.

“Just being around him is an inspiration because of the way he behaves. At the top level I have never seen anyone work as hard as him. You know it will be very difficult to do what he does, but if you try long enough and listen to what he says, you might get close.”

Sergio Marques, Bruno Fernandes’ first football coach, speaking to FourFourTwo in June 2020: “Bruno’s potential was there right from the very beginning. He was already gifted, but obviously needed some polishing. Our age group would train on Mondays, Wednesdays and Thursdays, and played on Saturdays. But you could see he was eager to learn more, so I asked him if he wanted to do one-on-one sessions and improve certain areas of his game.

“He said yes, so every Tuesday at around 6.30 in the evening, it was Bruno and me, working on his passing and ball control skills. Some may describe him now as a risk-taker, but I consider that trait to just be a strong belief in his own abilities.”