By The Sport Review
Updated on Wednesday 17 August 2022

Cesc Fabregas is a Spanish footballer who plays as a midfielder.

The playmaker won two Premier League titles, the League Cup, the FA Cup and the Europa League following his move to Chelsea FC from FC Barcelona in 2014.

Fabregas started his career at FC Barcelona before he moved to Arsenal as a teenager.

The Spanish international spent eight seasons at the north London club before he moved back to FC Barcelona in the summer of 2011.

Fabregas won the La Liga crown, the Copa del Rey and the Uefa Super Cup during his three-season stint back at Camp Nou.

The midfielder has a decorated international career. He was part of Spain’s squads that won Euro 2008, the World Cup in 2010 and Euro 2012.

Fabregas left Chelsea FC to sign for AS Monaco in January 2019.

Cesc was born in Arenys de Mar, Barcelona, Catalonia. He grew up as a Barcelona fan given his close proximity to the La Liga club.

Fabregas joined Barcelona’s famous La Masia academy when he was aged 10 in 1997. He learned his trade in the Spanish club’s youth system before he was poached by Arsenal in 2003.

Cesc was team-mates with Barcelona legends Gerard Pique and Lionel Messi at La Masia. He earned a reputation as a proficient goal-scorer despite ending up as a midfielder. 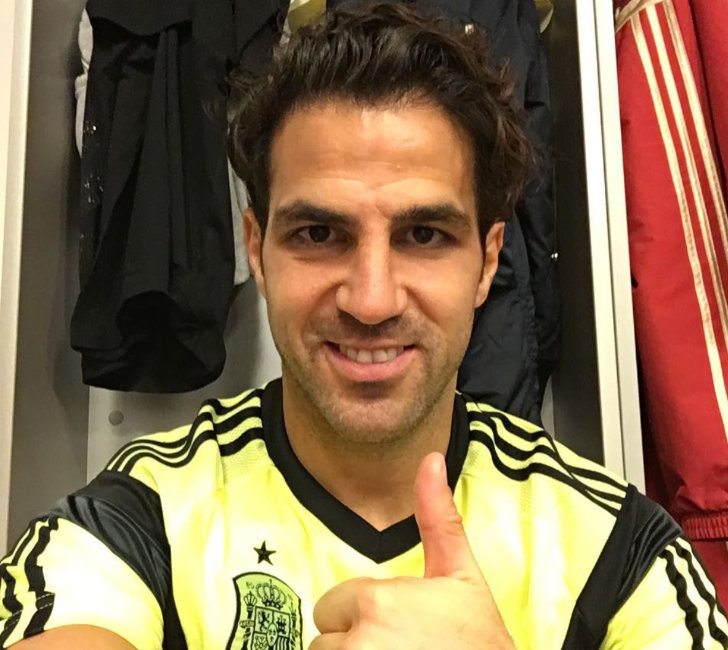 Fabregas moved to Arsenal’s academy in September 2003. While he was initially signed as a prospect for the future, it wasn’t long before Fabregas secured a place in the first team.

Cesc made his debut in Arsenal’s win against Rotherham United in the League Cup in October. Fabregas became Arsenal’s youngest-ever first team player after he made his first appearance aged 16 years and 177 days.

He was initially given the No57 shirt before taking over the No15.

He became the north London club’s youngest goal-scorer a month later with a goal against Wolverhampton Wanderers in the League Cup. Cesc finished the 2003-04 season with one goal in three appearances.

Fabregas watched on as his Arsenal team-mates lifted the Premier League trophy and finished the 2003-04 season unbeaten. However, he would become a first-team regular during his second campaign in north London.

Cesc scored three goals and made four assists in 46 appearances in all competitions in the 2004-05 campaign. Fabregas became the Champions League’s second-youngest goal-scorer when he netted against Norwegian side Rosenborg.

He won his first trophy in English football when Arsenal beat Manchester United on penalties in the 2005 FA Cup final. Fabregas started the game at Wembley.

Fabregas took on an even more important role following Patrick Vieira’s departure to Juventus. Cesc swapped the No15 shirt for the Frenchman’s vacated number four.

He thrived in the Arsenal team as he helped Arsene Wenger reach his first Champions League final in 2006. Fabregas scored and assisted Thierry Henry in Arsenal’s 2-0 win against Juventus in the Champions League quarter-finals in March 2006.

Fabregas was pitted against his former club Barcelona in the final in Paris. The Catalan side came from behind to claim a 2-1 win over Arsenal after Gunners goalkeeper Jens Lehmann was sent off. 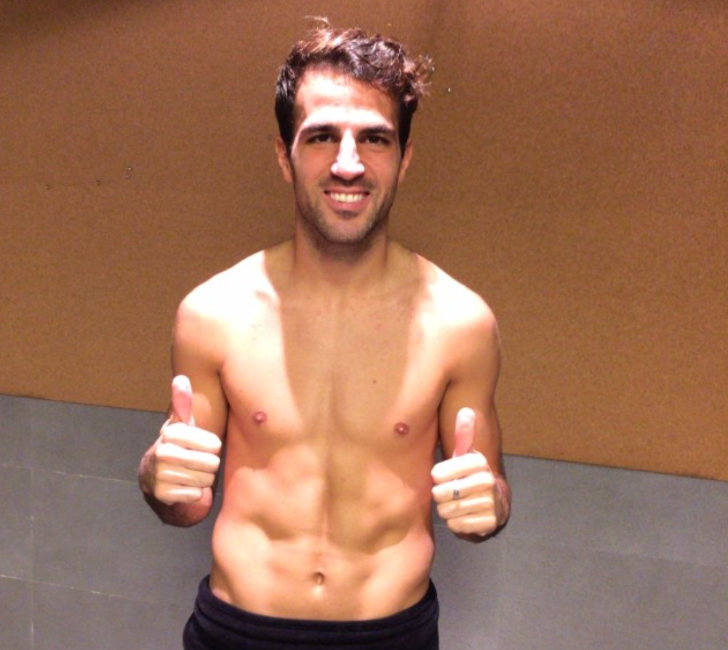 Arsenal managed to see off interest from Real Madrid in the 2006 summer transfer window – and Fabregas signed a new long-term contract with the Gunners in October 2006.

Fabregas helped Arsenal to mount a title challenge in 2007-08 despite the departure of Thierry Henry to FC Barcelona. The north London side led the Premier League table in March 2014 and were going well in the Champions League and the FA Cup.

However, the Gunners ended the season without silverware following a 5-3 aggregate loss to Liverpool in the Champions League quarter-final. Arsenal won three of their last 11 games in the Premier League to miss out in the title.

Fabregas scored an impressive seven goals and made a staggering 20 assists in 32 Premier League games that season.

Fabregas was named the Arsenal captain in November 2008. His season was cut short following a serious knee problem. The Gunners lost to Manchester United in the Champions League semi-finals to fall short once again in Europe.

He was limited to 22 appearances in the Premier League with a return of three goals and eight assists that season.

Fabregas made a bright start to the new season with a goal and an assist in a 6-1 win at Everton in their Premier League opener. But losses to title rivals Manchester City and Manchester United hampered Arsenal’s progress.

Once again Fabregas’ season was ended prematurely after he fractured his leg in a Champions League quarter-final loss to Barcelona. Arsenal once again fell short in the Premier League title race.

Cesc was linked with a return to FC Barcelona after Spain won the 2010 World Cup. However, Fabregas stuck with Arsenal and Wenger’s side were in the hunt for the quadruple in March 2011.

However, Arsenal lost to Birmingham City in the League Cup final and suffered a chastening loss to FC Barcelona in the round of 16 of the Champions League. Cesc and his Arsenal team-mate were eliminated in the FA Cup quarter-finals before their title challenge also evaporated. 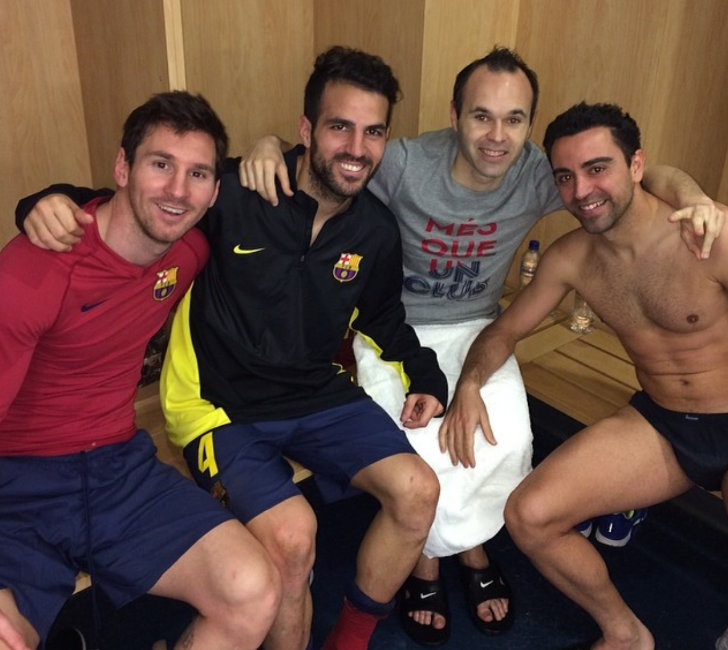 Fabregas sealed an emotional return to his boyhood club on 15 August 2011, when FC Barcelona reached a £35m agreement with Arsenal to sign the creative midfielder.

Cesc made his FC Barcelona debut in the second leg of their 5-4 aggregate win against Real Madrid in the Spanish Super Cup. He then got on the score-sheet in FC Barcelona’s 2-0 win over Porto in the Uefa Super Cup in Monaco. He netted on his La Liga debut against Villarreal too.

His first Champions League goal for FC Barcelona came against Viktoria Plzen in the group stage.

Fabregas was prolific during December after he scored in a 3-1 win over Real Madrid in El Clasico at The Bernabeu.

Cesc won the Copa del Rey with FC Barcelona after a 3-0 win over Athletic Bilbao but Chelsea FC defeated the Catalan side in the Champions League semi-finals.

His start to his second season at FC Barcelona was subdued. Fabregas didn’t score until October. He netted his first career hat-trick in a 5-0 win at Malaga in April 2013.

Barcelona ended the season without silverware despite Fabregas scoring 14 goals and 11 assists in 48 games in all competitions.

Fabregas made eight goals and 13 assists in 36 appearances in La Liga before his move to Chelsea FC in the summer of 2014. 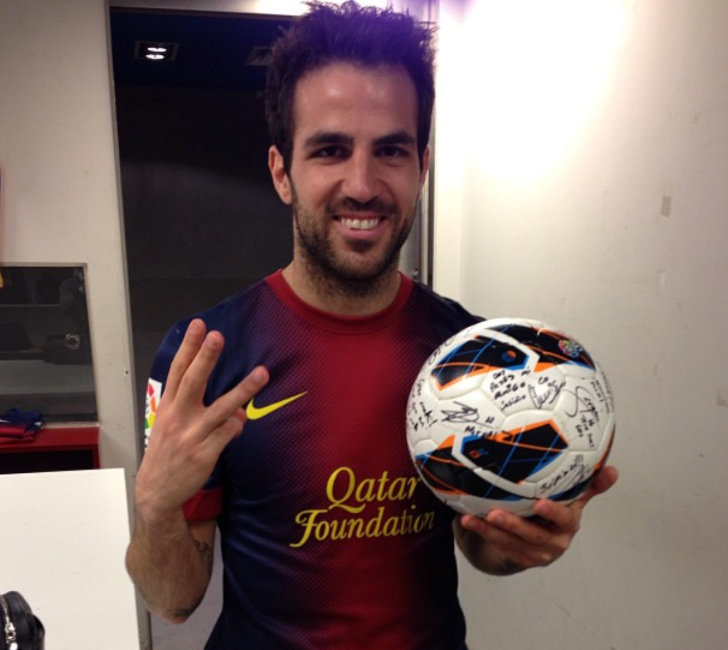 Cesc was linked with a return to Arsenal but the midfielder completed a controversial move to Chelsea in a £27m deal on 12 June 2014.

Fabregas made two assists in Chelsea’s 3-1 win against Burnley on his Premier League debut for the south west London side in August 2014.

The playmaker scored his first goal in Chelsea’s 1-1 draw with Schalke in the Champions League in September.

Fabregas was a key part of Chelsea’s title-winning team under Jose Mourinho. He scored goals against Crystal Palace, Stoke City and Queens Park Rangers but it was his ability to create goals that proved a real asset.

Cesc created 18 goals for his team-mates and struck up a brilliant relationship with Diego Costa.

As well as winning the Premier League title for the first time, Fabregas was part of the Chelsea team that beat Tottenham in the League Cup final at Wembley. 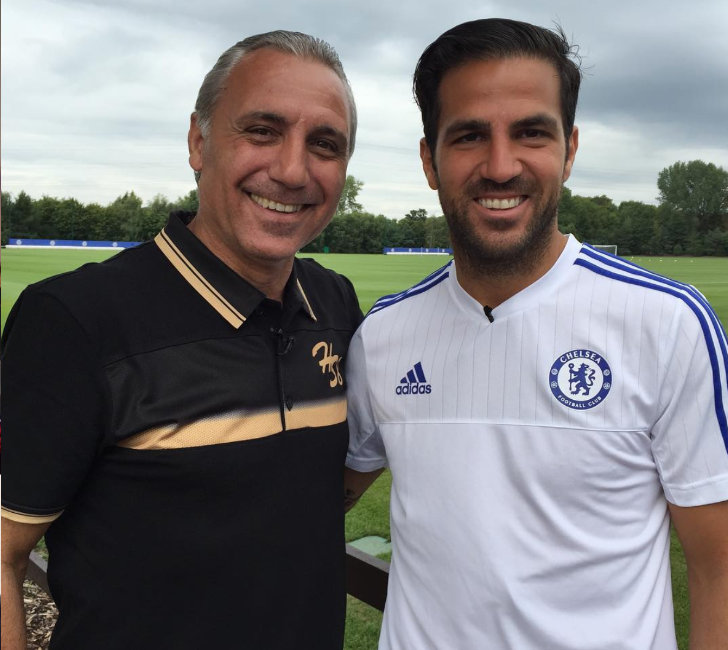 Fabregas, like the rest of his Chelsea team-mates, endured a tough 2015-16 season. Mourinho was sacked following a poor start to the season amid murmurings of unrest in the dressing room.

He didn’t score in the Premier League until January 2016 in a 3-3 draw with Everton. His performances improved under interim manager Guus Hiddink in the second half of the season. Cesc ended the campaign with five goals and seven assists.

While his defensive ability was criticised in 2015-16, the arrival of holding N’Golo Kante helped to ease the pressure on Fabregas.

New manager Antonio Conte helped to rekindle the midfielder’s best form alongside Kante and Nemanja Matic despite using Cesc sparingly in the opening half of the season.

Fabregas had to wait until 3 December to make his first Premier League start, when he orchestrated a 3-1 win at title rivals Manchester City.

He went on to make 13 starts and 16 substitute appearances in Chelsea’s title-winning campaign. He contributed five goals and 12 assists.

The Blues lost to Fabregas’ former club Arsenal in the FA Cup final.

The sale of Matic to Manchester United saw Fabregas begin the 2017-18 season as a regular starter. He was sent off in a 3-2 loss to Burnley in their opening game at Stamford Bridge.

He scored his first goal of the campaign in a 2-0 win over Everton. 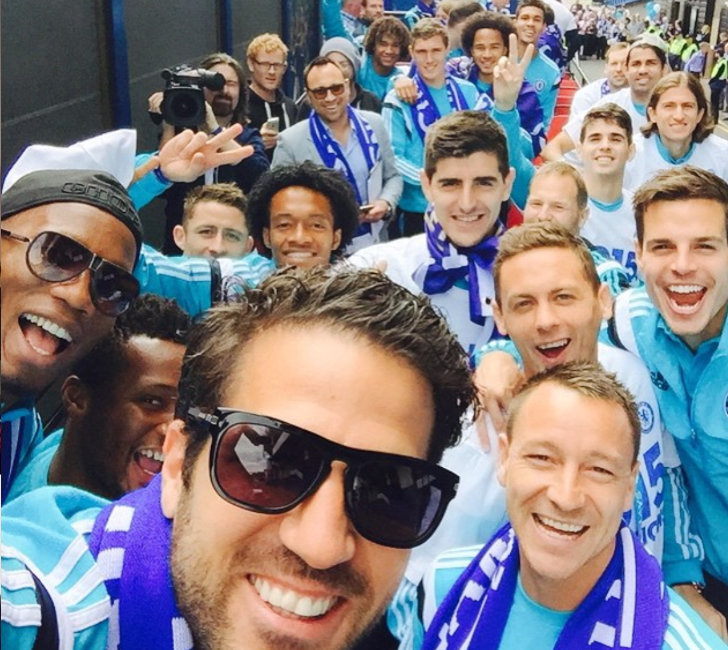 He started Chelsea FC’s 1-0 win against Manchester United in the FA Cup final at Wembley.

Fabregas finished the season with three goals and nine assists in 52 games in all competitions.

Monaco did not pay a fee for the midfielder but agreed to pay bonuses to Chelsea FC linked to his performances.

Fabregas made his senior Spain debut against Ivory Coast in 2006. He became the youngest player to make an appearance for La Roja in 70 years.

His first start came in a 3-1 loss to eventual runners-up France in the last 16.

Fabregas was an important member of Spain’s squad that won Euro 2008. The midfielder scored in a 4-1 victory over Russia. He dispatched the winning penalty over world champions Italy in the quarter-finals. 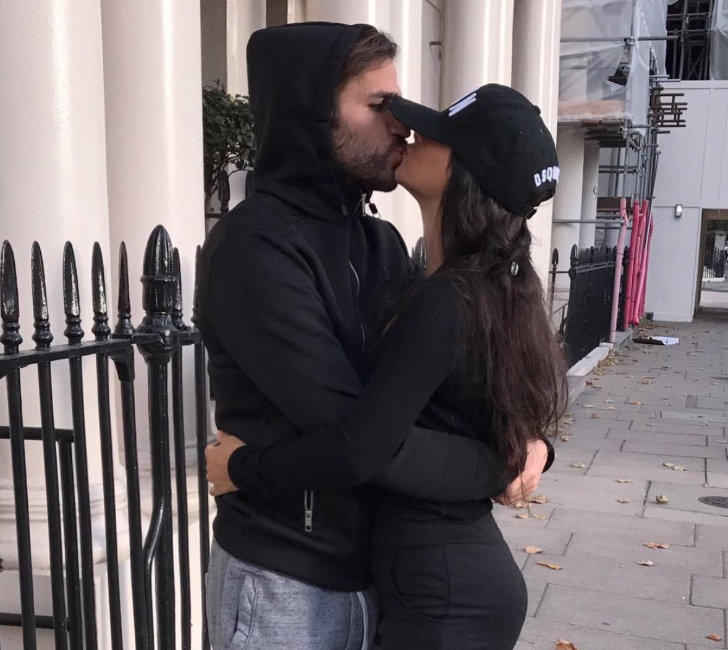 Cesc made two assists in a 3-0 win against Russia in the last four. His performances in the knockout stage earned him a place in Spain’s starting XI in the final.

He was part of Vicente del Bosque’s squad for the World Cup in South Africa. However, he was used as an impact substitute as Barcelona trio Sergio Busquets, Xavi and Andres Iniesta started as the midfield three.

He did provide the assist for Iniesta’s winning goal in extra-time of their 1-0 victory over Netherlands in the final.

His only Euro 2012 goal came in a 4-0 win against Republic of Ireland. Fabregas showed his steel with the winning penalty against Portugal in the semi-finals.

Cesc teed up David Silva to break the deadlock in a 4-0 win over Italy in the Euro 2012 final.

Fabregas was part of the Spain side who suffered a surprise group-stage exit at the 2014 World Cup in Brazil.

Cesc made one assist in four appearances at Euro 2016 as Spain lost to Conte’s Italy side in the round of 16.

Fabregas has scored 15 goals in 110 appearances for Spain, with his 100th cap coming against Ukraine in 2015.

Fabregas has remained good friends with his former FC Barcelona team-mate Lionel Messi over the years. 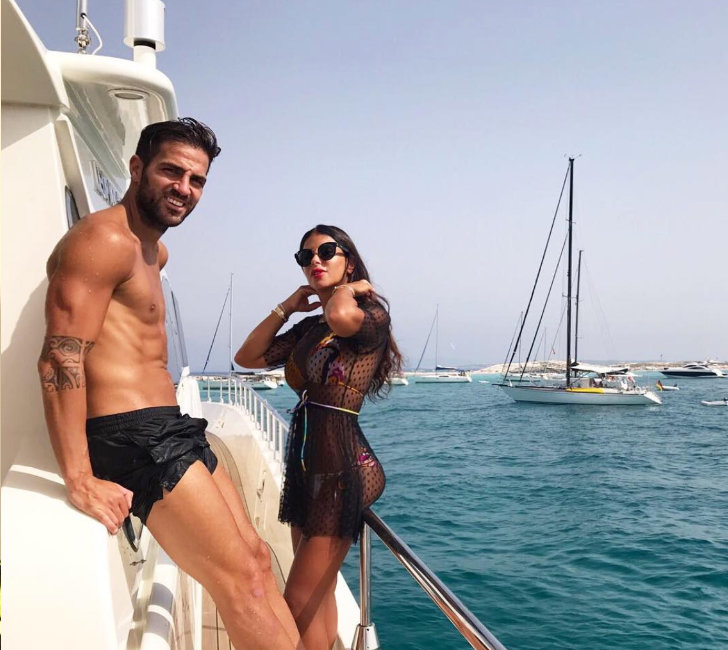 Cesc Fabregas – Did You Know?

• Fabregas beat Sergio Ramos’ record when he became the youngest-ever player to represent Spain in 2006.

• Cesc is the 10th player to win 100 caps for Spain after the midfielder featured against Ukraine in 2015.

• Fabregas became the first player to make six assists in six successive games in the Premier League during his first season at Chelsea FC.

• He won the PFA Premier League young player of the year in 2008 while at Arsenal.