By The Sport Review
Updated on Thursday 9 December 2021

He grew up playing for local US Soccer Development Academy club PA Classics.

Christian moved to Germany to join Borussia Dortmund at the age of 16 in February 2015.

The United States playmaker made his Dortmund debut in a 2–0 win against FC Ingolstadt on 30 January 2016. Christian won the German Cup in the 2016-17 season to secure his first senior trophy.

In the summer of 2019, Christian completed a big-money transfer to Premier League side Chelsea FC.

What do we know about Christian’s early years, and what can we learn from his journey so far? This is Christian Pulisic’s story.

Christian played for Michigan Rush during a brief stint in Michigan, after having initially spent a year in England when he was seven years old.

After his family moved back to Hershey, Pennsylvania, where he was born, Christian trained with local U.S. Soccer Development Academy club PA Classics.

Christian completed his move to Borussia Dortmund at the age of just 16 in February 2015.

He was placed in their Under-17 team and the American talent wasted no time leaving his mark at the German club.

Christian scored 10 goals and made eight assists in 15 appearances for the Dortmund youth team.

His electric form earned him a call-up to the Dortmund senior squad under Jurgen Klopp’s replacement Thomas Tuchel.

He scored one goal and made two assists during two mid-season friendlies in December to catch the manager’s eye.

Christian made his professional debut as a substitute for Borussia Dortmund in a 2-0 win over FC Ingolstadt on 30 January 2016.

He made his Europa League debut in a 2-0 win over Portuguese giants FC Porto on 18 February. Christian made further appearances from the bench in Europa League fixtures against Tottenham Hotspur and Klopp’s Liverpool FC team.

Dortmund’s European adventure was ended by a 4-3 loss to Liverpool FC at Anfield in the Europa League quarter-finals.

Christian scored in his first Bundesliga start in a 3-0 win over rivals Hamburg on 17 April 2016.

Christian made his first start of the 2016-17 season in a 6-0 win over Polish side Legia Warsaw in the Champions League on 14 September 2016. He made an assist on his Champions League debut.

Christian netted his first Bundesliga strike of his second season at Dortmund with a goal in a 6-0 victory over Darmstadt three days later.

He was a 76th minute substitute in Dortmund’s 2-2 draw with Champions League holders Real Madrid on 27 September.

Christian scored his second goal of the campaign in a 3-3 draw with Ingolstadt in October.

Christian started both of their games against Sporting Lisbon in the Champions League.

He lasted 60 minutes of their 2-2 at The Bernabeu in their final group stage fixture.

Christian didn’t get on the score-sheet again until a 2-2 draw with Bayer Leverkusen at the start of March.

He netted in their 4-0 win over Benfica in the second leg of their Champions League round of 16 clash.

He put pen to paper on a new deal with Dortmund to keep him at the Westfalenstadion until 2020.

Christian didn’t score again in the remaining months of the 2016-17 season.

The American playmaker finished the campaign with five goals and nine assists in 43 games in all competitions.

Christian was linked with a potential reunion with Klopp at Liverpool FC throughout the 2017 summer transfer window but a deal failed to materialise.

Christian scored in Dortmund’s 5-4 loss to Bayern Munich in the German Super Cup in August 2017. He found the net in their next game – a 3-0 victory over Wolfsburg in the Bundesliga.

Christian started their 3-1 loss to Tottenham at Wembley in their Champions League group stage fixture.

Christian, like Dortmund, struggled throughout the European campaign as the German side failed to make it out of a group containing Spurs, Real Madrid and APOEL Nicosia.

He ended a three-month goal drought with a goal in a 2-1 victory over Hoffenheim in the Bundesliga.

Christian netted his fourth and final goal of the Bundesliga campaign in a 3-0 win over Stuttgart on 8 April 2018.

He finished his second full season with five goals and five assists in 41 games in all competitions.

On 2 January 2019, Chelsea FC announced that they had agreed a deal to sign Christian Pulisic from Borussia Dortmund for a transfer fee of £58m (BBC Sport). He was handed the number 22 shirt with the Blues.

The deal saw Pulisic be immediately loaned back to Dortmund for the remainder of the 2018-19 campaign, with Christian linking up with his new Chelsea FC team-mates, who were getting used to life under new manager Frank Lampard, in the summer of 2019.

Pulisic notched up his first Premier League assist for Chelsea FC during the 3-2 win over Norwich City at Carrow Road on 24 August 2019.

He announced himself in style to the Premier League on 26 October 2019, when he scored an impressive hat-trick in a man-of-the-match display during the 4-2 win over Burnley at Turf Moor.

Christian represented United States from Under-15 level through to Under-17 level.

He earned his first call-up to the United States senior team under Jurgen Klinsmann.

Pulisic made his senior international debut under the German in a 4-0 win over Guatemala in their 2018 World Cup qualifier.

In doing so, Christian became the youngest American to play a World Cup qualifier.

Christian became the youngest player to score a senior goal for the United States in a 4-0 victory over Bolivia in May 2016.

Christian netted two goals and made two assists in a 6–0 victory over Saint Vincent and the Grenadines in their World Cup qualifier.

He netted two more goals in a victory over Trinidad and Tobago as well as finding the net against Panama.

Christian found the net in a 2-1 loss to Jamaica, a result which ultimately cost the United States their place at the 2018 World Cup in Russia. 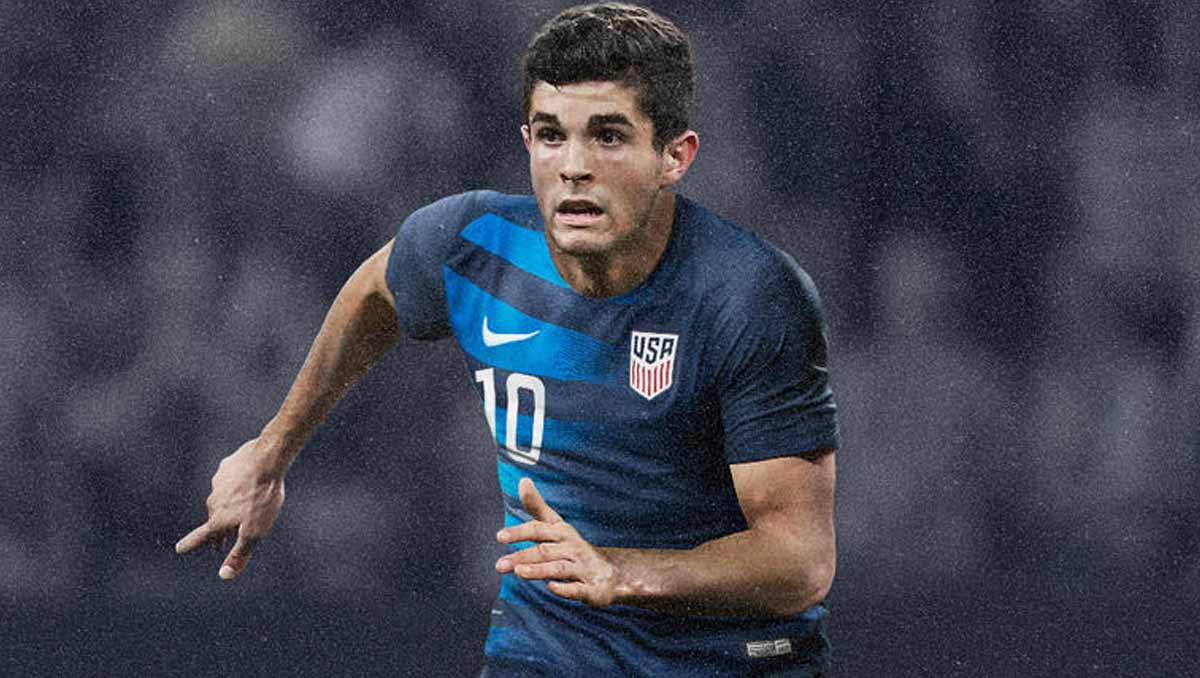 Christian’s grandfather, Mate Pulisic, was born in Croatia on the island of Olib.

Christian applied for Croatian citizenship after moving to Germany (and the European Union) in order to avoid having to apply for a German work visa.

The Dortmund star rejected the chance to play for the Croatia national team and opted to represent the USA.

Christian has a cousin, Will Pulisic, who is also a professional footballer and plays a goalkeeper.

Christian Pulisic – Did You Know?

• He moved to Dortmund from Hershey, Pennsylvania. The American town has a population of less than 15,000 people. It gave the world Hershey’s chocolate.

• Christian’s parents Mark and Kelley both played collegiate soccer at George Mason University, with his father going on to play professional indoor soccer as a forward with the Harrisburg Heat in the 1990s.

• Christian made an appearance for Brackley Town during a brief stint in England as a kid.

• On his brief time at Brackley Town at the age of seven, Christian said: “A lot of people don’t realise but it really brought on my passion for the game. I just started to love it so much and I said: ‘Wow. I’m pretty good! I think I can do something with this game.’”