By The Sport Review
Updated on Wednesday 3 August 2022 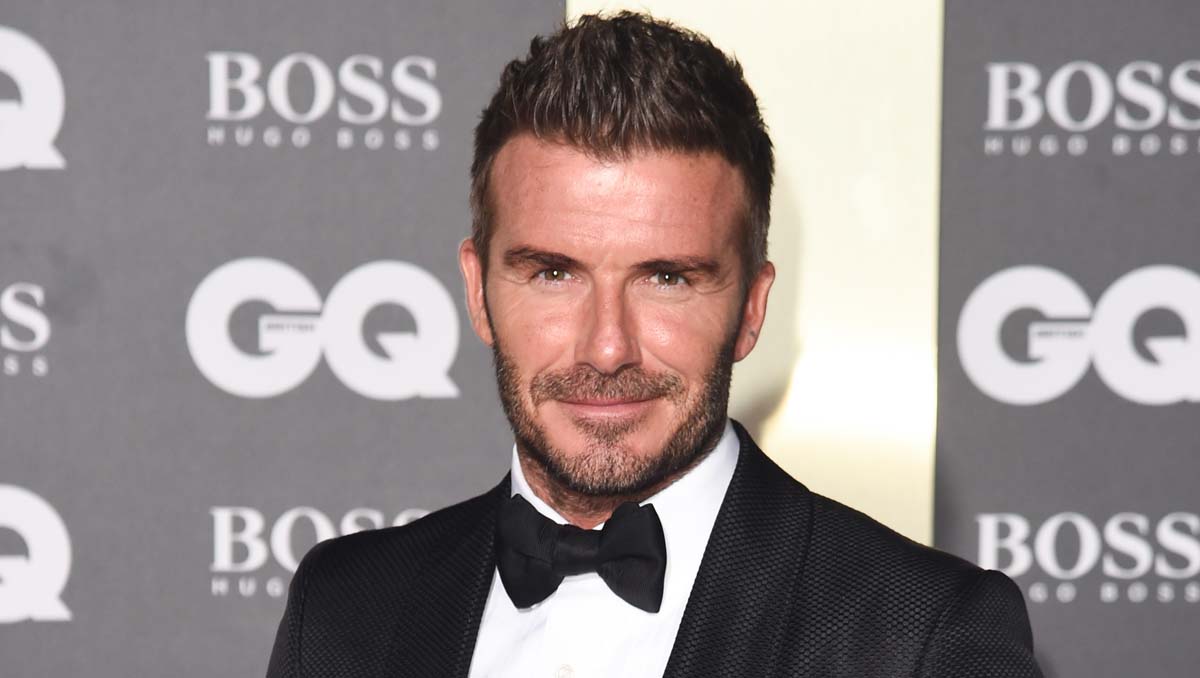 David Beckham is an English former footballer who played for the likes of Manchester United and Real Madrid.

The 47-year-old is one of the best-known footballers of his generation and he enjoyed lots of success at club level with both Manchester United and Real Madrid.

Born in London in 1975, Beckham started his youth footballing career with Tottenham Hotspur, before eventually moving into Manchester United’s academy as a trainee in 1991.

He made his first-team debut for Manchester United in 1992, and enjoyed a breakthrough season with the Red Devils in the 1995-96 campaign.

With Manchester United under Sir Alex Ferguson, Beckham won six Premier League titles, two FA Cups and the Champions League, before he eventually left to join Real Madrid in the summer of 2003.

A former England captain, Beckham spent four years with Real Madrid, winning La Liga and the Spanish Super Cup, before moving to LA Galaxy in 2007. Beckham – who lifted a total of 19 trophies, including 10 league titles – spent time on loan to AC Milan before finishing his career at Paris Saint-Germain in 2013.

So, what do we know about Beckham’s journey to becoming one of the top footballers in the world? This is his story.

David Beckham (full name: David Robert Joseph Beckham) was born on 2 May 1975 in London, England, to parents Sandra and David (Ted). His mother was a hairdresser, while his father was a kitchen fitter.

Beckham was given his middle name, Robert, in honour of Bobby Charlton, his father’s favourite footballer. David is one of three siblings – he has an older sister, Lynne Georgina, and a younger sister, Joanne Louise. 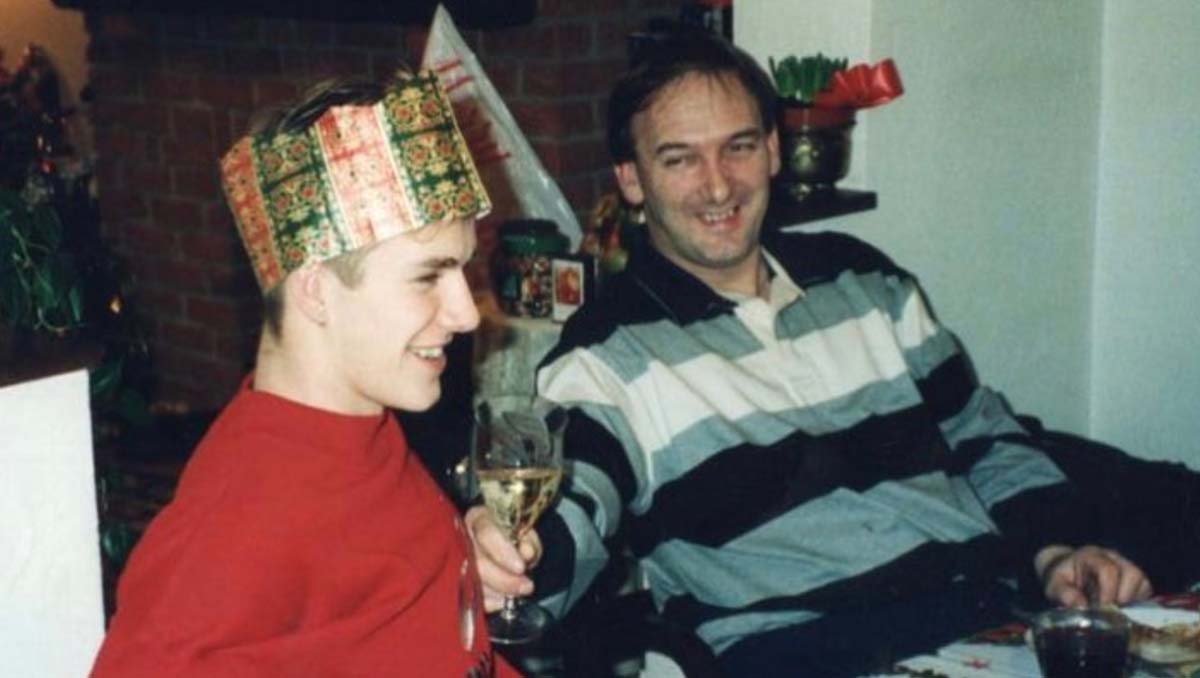 David had a passion for football from a young age and always wanted to pursue a career in the sport. Speaking in 2007, Beckham said: “At school whenever the teachers asked, ‘What do you want to do when you’re older?’ I’d say, ‘I want to be a footballer.’ And they’d say, ‘No, what do you really want to do, for a job?’. But that was the only thing I ever wanted to do.”

Beckham’s parents were both faithful Manchester United supporters and often travelled from London to watch the Red Devils in action at Old Trafford.

After attracting the attention of a scout while playing for Waltham Forest under-12s, he was given a trial at Manchester United. In the end, David had to make a decision about signing for Tottenham Hotspur or Manchester United, and he opted for the Red Devils.

Aged 16, Beckham left home and signed for Manchester United as a trainee on 8 July 1991.

Beckham was part of the team that won the FA Youth Cup with the Red Devils in 1992, along with the likes of Ryan Giggs, Gary Neville and Paul Scholes.

He made his professional debut for the Red Devils on 23 September 1992 in a League Cup match against Brighton and Hove Albion. David then scored his first goal for Manchester United in a 4-0 victory over Galatasaray on 7 December 1994 in the Champions League.

After a brief spell on loan to Preston North End, Beckham made his Premier League debut for Manchester United on 2 April 1995 in a goalless draw against Leeds United. Beckham’s first Premier League goal came on 19 August 1995, when he netted in a 3-1 victory over Aston Villa away from home. 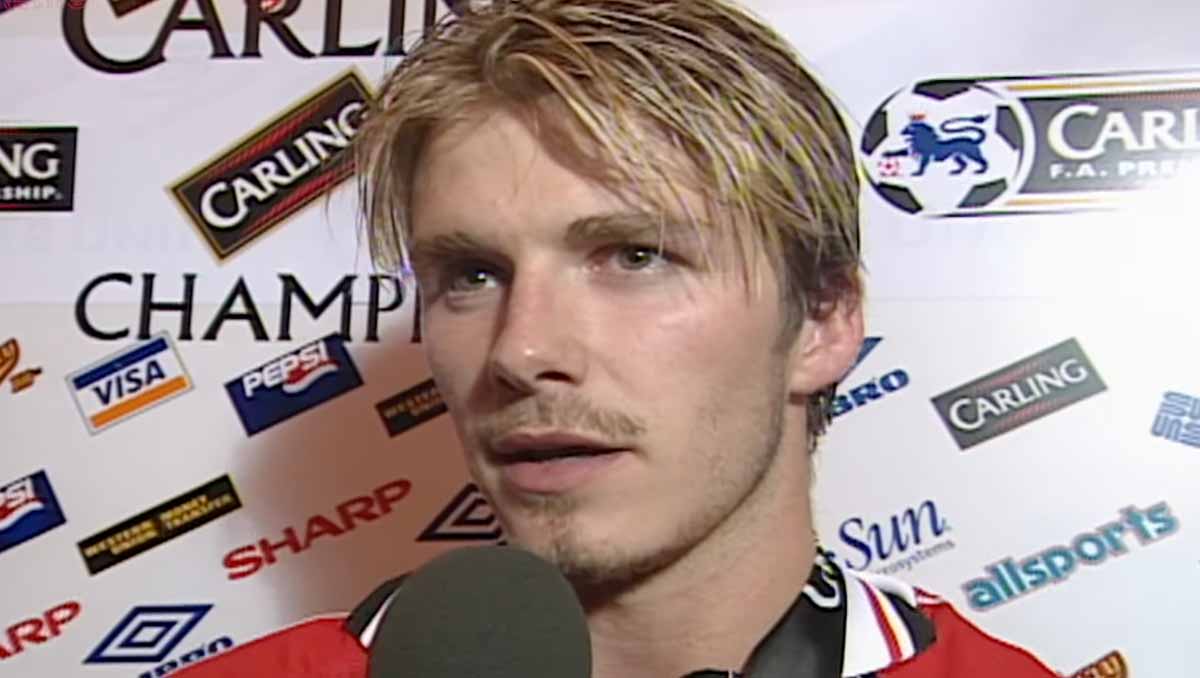 Beckham went on to establish himself as Manchester United’s first-choice right-sided midfielder and netted a total of 62 goals in 265 league games in the next eight seasons.

He helped the Red Devils to win six Premier League titles, two FA Cups and the Champions League during a trophy-laden spell under Sir Alex Ferguson at Old Trafford.

In total, Beckham scored 85 goals in 394 games in all competitions for Manchester United.

In the summer of 2003, speculation about Beckham’s future at Manchester United was starting to gather pace, and a move to Spain beckoned.

On 18 June 2003, it was announced that Beckham would be joining Real Madrid on a four-year contract for a fee of £24.5m.

At the time, Manchester United chief executive Peter Kenyon said: “While we are sad to see David go after so many great years at Old Trafford, we believe this is a good deal for the club, and we now look forward to building on the success of last season’s championship title. We wish David all the best in his new career in Spain and thank him for his fantastic contribution to the team’s achievements in the last decade.” 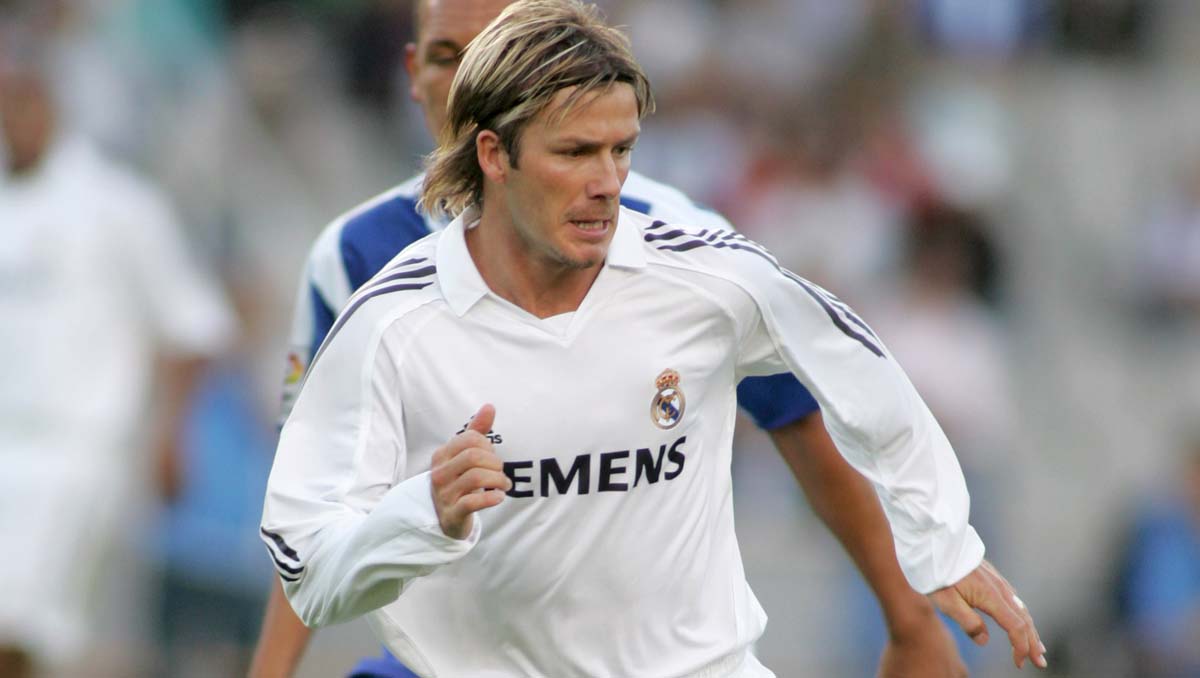 Speaking in an interview with FourFourTwo back in 2006, Beckham explained how he felt about his move to Real Madrid, which was shrouded in controversy.

“I’d always said that if I ever had to leave United – which I never thought I would do – then I would be going to Real Madrid,” Beckham said. “And I would decide my future. I was angry that I was leaving Man United – it’s the club I’ve always supported, the club I started my career at and I thought I’d end my career at.”

Beckham made his competitive debut for Real Madrid in the first leg of the Supercopa de Espana against Mallorca on 24 August 2003. Beckham then scored his first goal for the club in the return leg in a 3–0 win at home.

During his four seasons with Real Madrid, Beckham scored 13 goals in 116 La Liga games for the Spanish side, helping them to win the title in his final campaign at the club in 2006-07. In total, Beckham netted 20 goals in 155 games in all competitions for Real Madrid.

On 11 January 2007, it was confirmed that Beckham would be leaving Real Madrid that summer to join MLS side LA Galaxy.

During his six years with LA Galaxy – which included two loan stints at AC Milan – Beckham scored 18 league goals in 98 games for the club. In total, he netted 20 goals in 118 games for LA Galaxy. He won the MLS Cup in both 2011 and 2012 with the club. 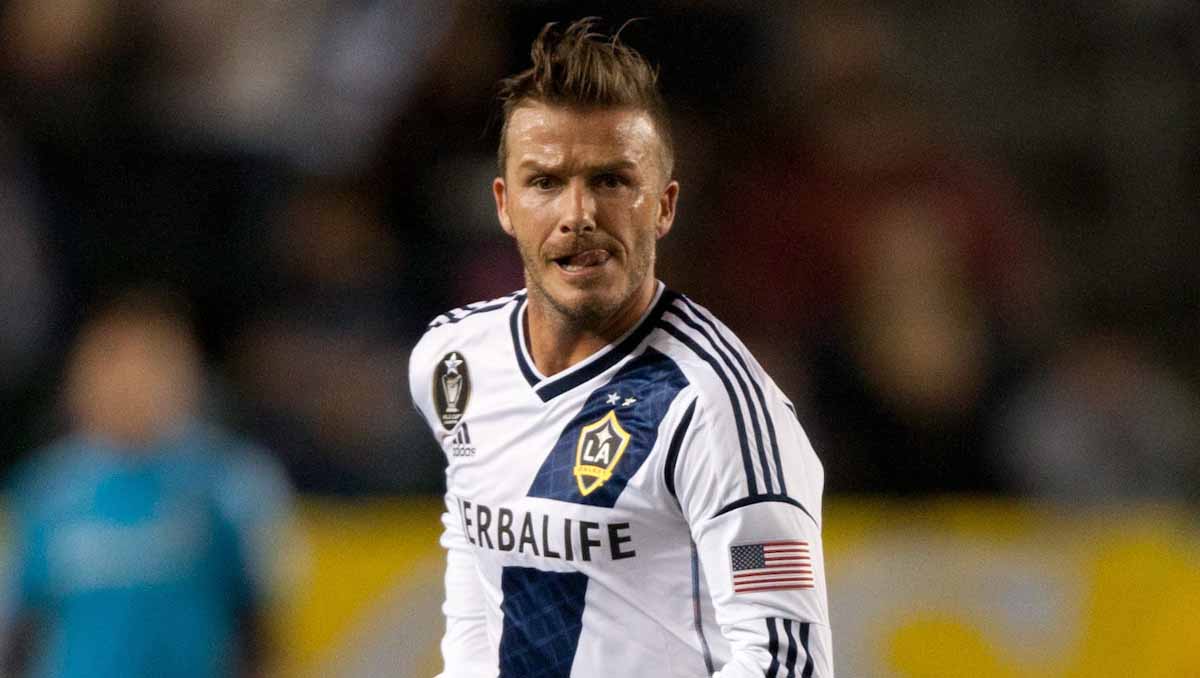 Beckham returned to Europe to sign for Paris Saint-Germain from LA Galaxy on 31 January 2013. He penned a five-month deal with the Ligue 1 side.

He made his debut for PSG on 24 February 2013, when he came off the bench in the 76th minute in a Ligue 1 home match against Marseille.

On 16 May 2013, Beckham announced that he was retiring from playing professional football. He was made captain for his final home game against Brest on 18 May 2013, his final appearance for the club. 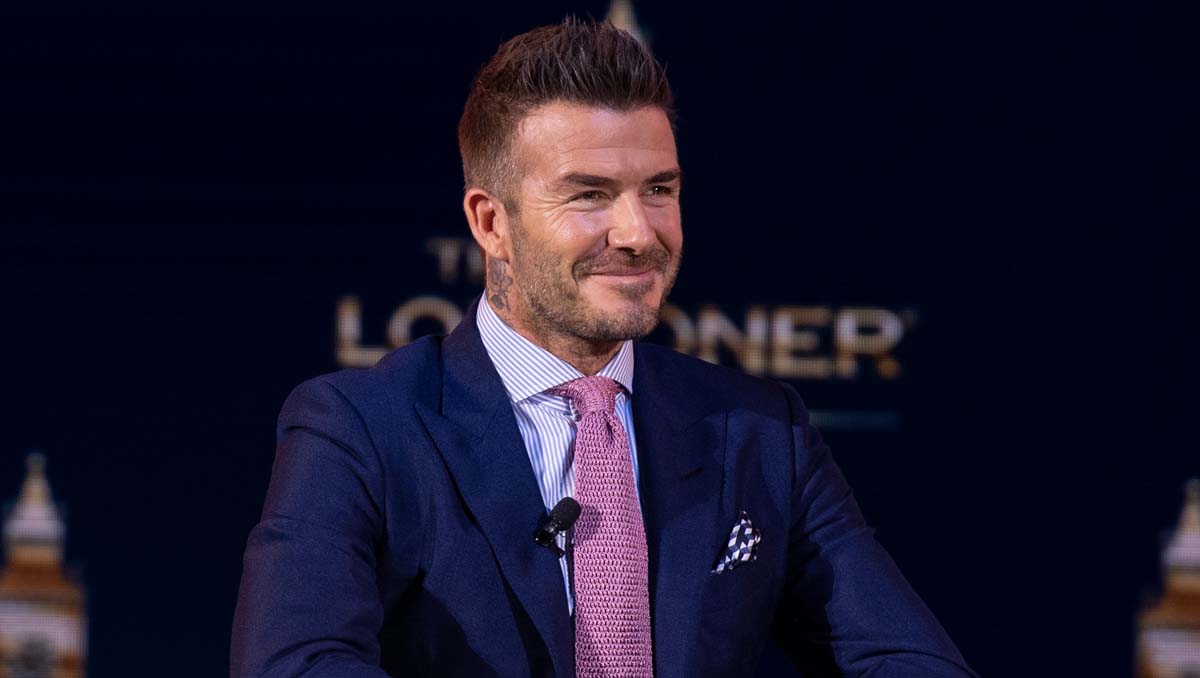 “If you had told me as a young boy I would have played for and won trophies with my boyhood club Manchester United, proudly captained and played for my country over 100 times and lined up for some of the biggest clubs in the world, I would have told you it was a fantasy,” said Beckham. “I’m fortunate to have realised those dreams.”

During his decorated career, Beckham lifted a total of 19 trophies, including 10 league titles.

Beckham made his first appearance for the England national team on 1 September 1996, in a World Cup qualifier against Moldova.

His first goal for England came at the 1998 World Cup, when he netted a brilliant free-kick against Colombia in a 2-0 win in the group stage.

Beckham was then shown a straight red card in England’s next match against Argentina for kicking out at Diego Simeone while lying on the floor, after having been fouled by his opponent.

The midfielder faced heavy criticism back in England after the Three Lions were knocked out of the tournament on penalties following Beckham’s sending off. 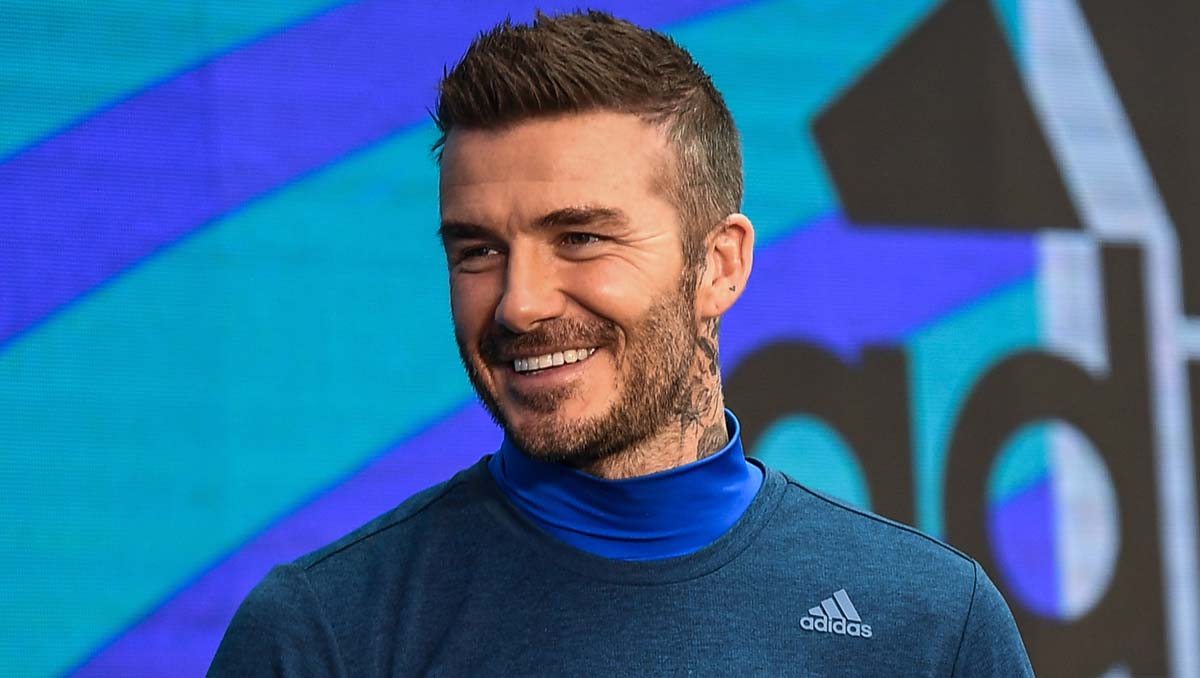 “It hurt at the time,” Beckham said of the criticism that headed his way in an interview in 2006. “But what I really think about when I look back to that time is the way Man United fans were to me. Every time I took a corner for two years – two years! – the United fans were on their feet, clapping me, cheering me, singing my name. All I had to do was step towards the corner flag and they’d be doing that. That support was amazing. On the pitch, it made everything a lot easier.”

In November 2000, Beckham was made England captain by caretaker manager Peter Taylor, and then kept the role under Sven-Goran Eriksson.

Beckham was the hero for his country on 6 October 2001 in their final World Cup qualifying game against Greece at Wembley. The Three Lions needed to win or draw the match to qualify for the 2002 World Cup but were trailing 2-1 with little time remaining. Beckham then curled home a brilliant trademark curling free-kick in the 93rd minute.

“To this day, one of my proudest achievements is captaining my country,” Beckham said. “I knew every time I wore the Three Lions shirt, I was not only following in a long line of great players, I was also representing every fan that cared passionately about their country.

As is the case with most celebrities and former sports stars, there is no official figure for David Beckham’s net worth available. However, a number of media outlets have made estimates about what the former footballer’s net worth is believed to be. 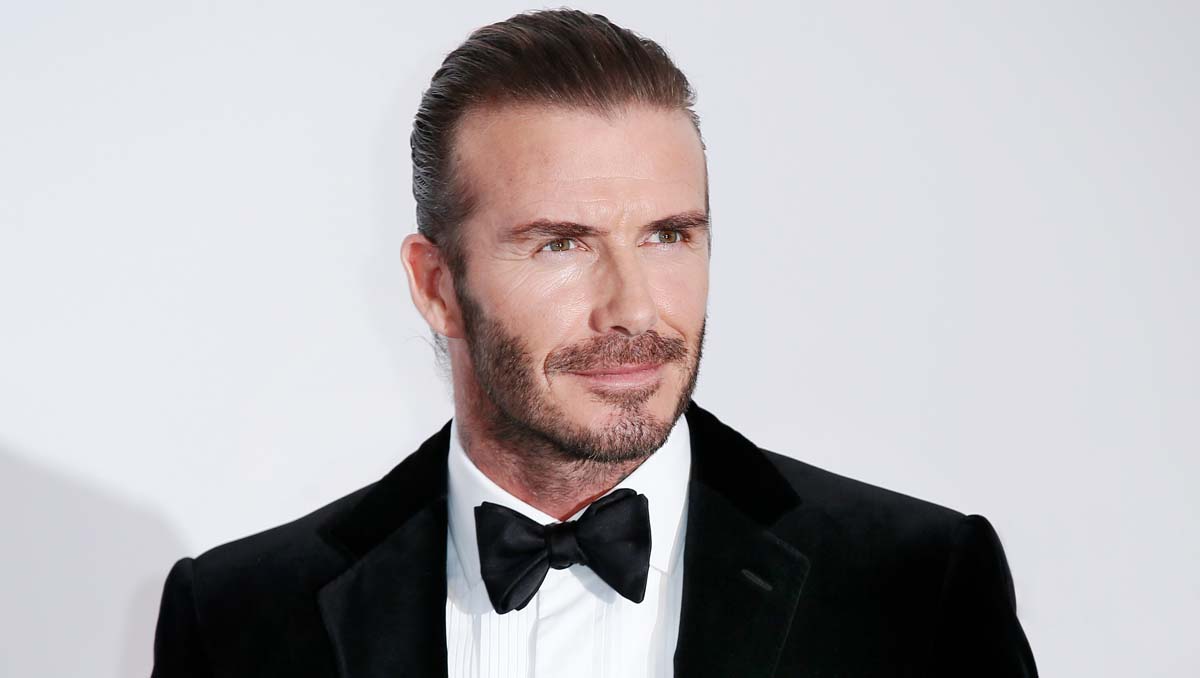 David Beckham’s net worth is reported to be around £380m (Photo: Andrea Raffin / depositphotos.com)

In 2022, The Sunday Times estimated that David and Victoria Beckham’s net worth was in the region of £380m ($464m) thanks to earnings from football, fashion and more.

Meanwhile, back in 2016, Forbes estimated that David Beckham had banked in the region of $730m (£598m) in total career earnings up until that point, placing him at number nine on the highest-paid athletes of all time list.

Beckham is married to his wife Victoria, with the pair having tied the knot in 1999. The couple first met in February 1997. Beckham and his wife have four children together – Brooklyn, Romeo, Harper and Cruz.

Speaking in an interview in 2007, Victoria said of her initial impressions of Beckham: “I didn’t really know who he was. I was never into football. He was always with his mum, dad and sister while a lot of the footballers were at the bar getting drunk. I could sense right from the start that David was a gentleman, and very family-oriented, which is important because I’m the same.” 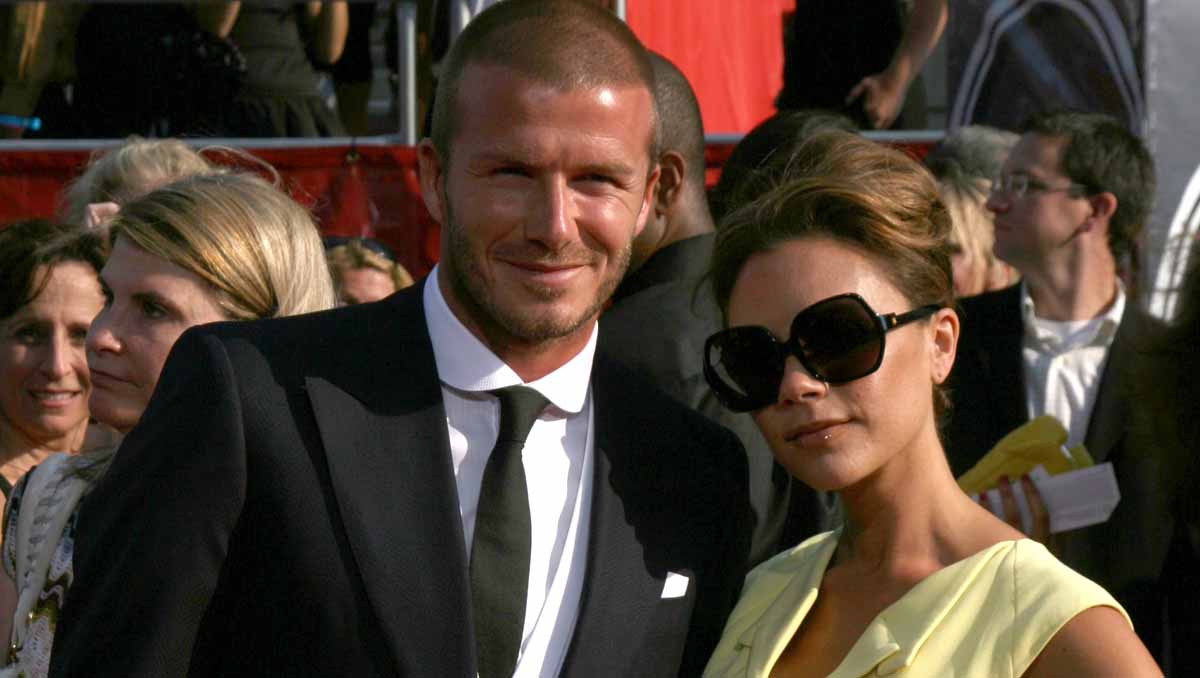 Beckham wore Adidas football boots from the start of his career, most notably the Adidas Predators. in 2003, he signed a lifetime contract with Adidas which was reportedly worth around $160m.

Ronaldo, speaking about Beckham in October 2003: “We knew before he was a good player, but we did not expect him to be such an influential player, to show such commitment to the team spirit. The way he runs for everything, the way he tries his best. He has everyone’s respect.”

Roberto Carlos, speaking about Beckham’s free-kicks back in 2015: “Beckham takes free-kicks better than me. It is a joy to watch him take free kicks and he has proved that free kicks are not all about power.”