By The Sport Review
Updated on Friday 10 December 2021

David De Gea is a Spanish footballer who plays as a goalkeeper for Premier League club Manchester United.

The goalkeeper started his professional career at La Liga side Atletico Madrid in 2008 after he joined the club’s youth academy at the age of 13.

Manchester United then signed De Gea in a reported £18.9m deal from Atletico Madrid in the 2011 summer transfer window, when Sir Alex Ferguson was still in charge at Old Trafford.

The shot-stopper has won the Premier League title, the Europa League, the FA Cup and the League Cup at Old Trafford.

De Gea has been a regular for his senior national team since making his Spain debut in a 2-0 win over El Salvador in 2014. 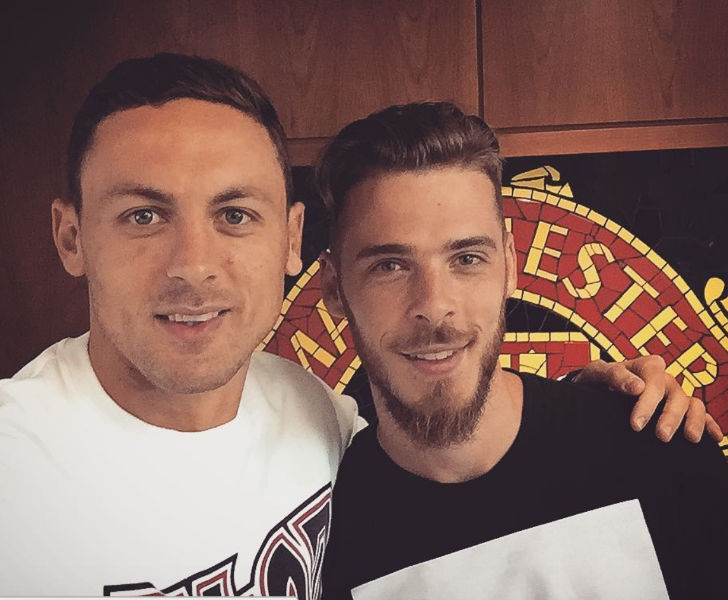 De Gea moved to Atletico Madrid at the age of 13. He signed his first professional contract with los Rojiblancos in November 2008.

He turned down the chance to move to Numancia on loan and was made to train alone away from the rest of Atletico Madrid B’s squad as punishment.

However, David managed to attract attention from Atletico manager Abel Resino and was made the club’s first-choice goalkeeper.

De Gea made his Atletico debut as a 27th-minute substitute in Atletico’s 2-0 loss to Porto in the Champions League at the age of 18 in November 2009.

Following an injury to first-choice goalkeeper Roberto, David was give an extended run in the first team and he made his La Liga debut in a 2-1 victory over Real Zaragoza.

He finished the 2009-10 season as Atletico’s first-choice goalkeeper following the appointment of new manager Flores.

De Gea was part of the Atletico team that were 2-1 winners against Fulham in the Europa League final in May 2010.

De Gea made a staggering 180 saves in 46 games in all competitions in his final season at the Vicente Calderon before his move to the Premier League.

Manchester United signed De Gea in a then-British record £18.9m deal for a goalkeeper on 29 June 2011. 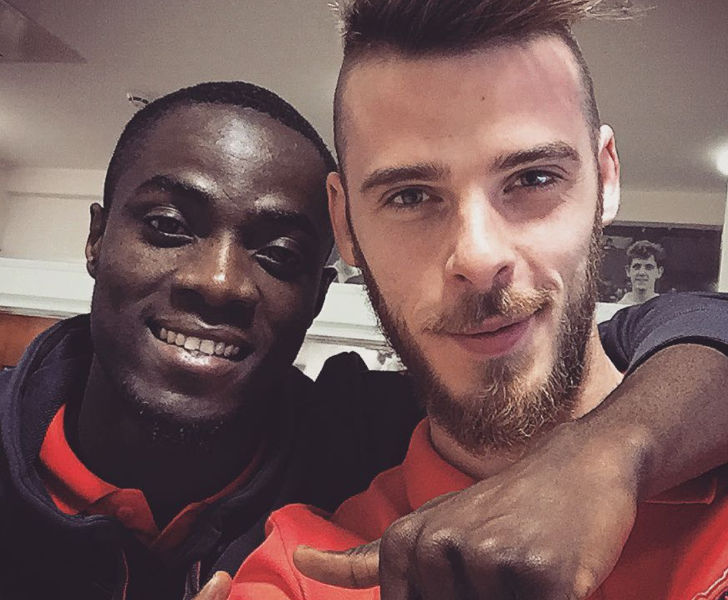 De Gea made his first competitive appearance in Manchester United’s 3-2 win against Manchester City in the Community Shield at Wembley in 2011.

David made a hesitant start to his Premier League career after he was criticised for Shane Long’s goal in Manchester United’s 2-1 win over West Brom.

However, he recorded his first clean sheet in a 3-0 win over Tottenham Hotspur in the Premier League before De Gea denied Robin van Persie from the penalty spot in Manchester United’s 8-2 win over Arsenal at Old Trafford in August 2011.

The Manchester United goalkeeper continued to impress against their title rivals Chelsea and Liverpool before he made his Champions League debut in a 3-3 draw with Swiss side Basel.

De Gea and Manchester United suffered a humiliating blow following a 6-1 loss to Manchester City at Old Trafford in October 2011. He was dropped from the Red Devils team following an error-strewn performance in a 3-2 loss at Blackburn Rovers.

Sir Alex Ferguson granted David a reprieve when second-choice goalkeeper Anders Lindegaard suffered an injury. De Gea was restored to the team for a 3-3 draw with Chelsea in February 2011.

He finished the season with eight clean sheets in the club’s final 19 games.

De Gea came into his own during his second season at Old Trafford.

His performance in a 3-2 win at defending champions Manchester City earned the Spanish goalkeeper praise after he denied Carlos Tevez and David Silva.

David suffered a setback when Manchester United legend Gary Neville highlighted his mistake as a key reason why the Red Devils dropped points in the title race at Tottenham Hotspur in January 2013.

However, De Gea bounced back with a confident display in Manchester United’s 1-1 draw with Real Madrid in the Champions League at The Bernabeu.

David helped Manchester United to ease to a 2-0 win against Wigan Athletic in the Community Shield final at Wembley in August 2014.

As the Red Devils struggled under Ferguson’s successor David Moyes, De Gea’s strong form was one of the only positives for the 20-time English champions.

Manchester United legend Peter Schmeichel described De Gea’s save to deny Emanuele Giaccherini in a 2-1 win at Sunderland as one of the Premier League’s best-ever saves.

De Gea made his 100th appearance for Manchester United in a 2-2 draw with Tottenham Hotspur in December.

The Spanish goalkeeper produced another brilliant performance in Manchester United’s 3-2 win against Olympiacos in the Champions League in March.

De Gea was widely praised for his penalty save to deny Leighton Baines in Manchester United’s 2-1 win at Everton in October.

He continued his fine form with standout performances against West Brom and Chelsea to win the club’s player of the month award.

De Gea produced a staggering eight saves to help the Red Devils ease to a 3-0 win against bitter rivals Liverpool on 14 December. 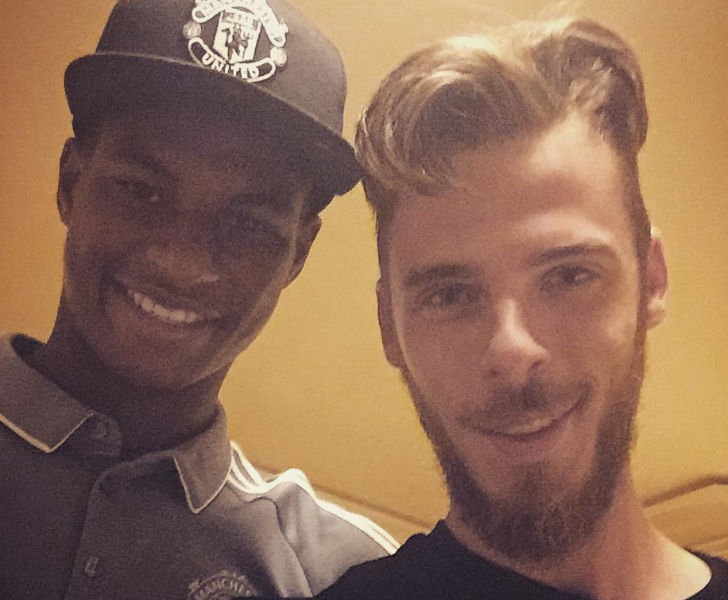 De Gea was left out of Manchester United’s 1-0 win against Tottenham in their season opener amid talk of a move to Real Madrid. However, the shot-stopper’s proposed £29m switch to Real Madrid fell through on La Liga’s transfer deadline day,

In a remarkable turnaround, De Gea then signed a new four-year deal with Manchester United on 14 September.

In a show of Van Gaal’s faith in the shot-stopper, David captained the Red Devils for the first time in a win over Ipswich Town in the League Cup a fortnight later.

Manchester United were inconsistent throughout the 2015-16 season under Van Gaal but De Gea’s performance level didn’t dip despite his team’s struggles.

Indeed, he finished the season with 14 clean sheets in the Premier League.

He played a big role in their FA Cup campaign after the Spanish goalkeeper saved Romelu Lukaku’s penalty in a 2-1 win against Everton in the semi-final.

The Red Devils won the competition thanks to a 2-1 extra-time victory over Crystal Palace in the final.

De Gea won Manchester United’s Player of the Year for a third consecutive season, which is a club record.

Jose Mourinho was named as Van Gaal’s replacement in May 2016.

The Spain international helped Manchester United to ease to a 2-1 win against Leicester City in the Community Shield final at Wembley.

De Gea was a key part of the Portuguese coach’s team throughout most of the campaign.

He made three saves in Manchester United’s 3-2 win over Southampton in the League Cup semi-final at Wembley in February.

The Spanish shot-stopper made 74 saves in 35 games in the Premier League to be named in the division’s team of the year for a fourth successive season.

However, Mourinho used Sergio Romero as his Europa League goalkeeper throughout their run to the final.

De Gea fell out of favour towards the end of the season due to speculation linking him with a move to Real Madrid.

Mourinho left De Gea on the bench for Manchester United’s 2-1 win against Dutch giants Ajax in the Europa League final in Stockholm in May 2017.

David was still at Manchester United at the start of the 2017-18 season after Real Madrid didn’t act upon their apparent interest in the goalkeeper.

De Gea made a record equalling 14 saves in Manchester United’s 3-1 win against Arsenal at The Emirates in the Premier League back in December.

He was named Manchester United’s player of the year after the Spain international made 115 stops in 37 games in the Premier League.

In September 2019, De Gea signed a new long-term contract with Manchester United, keeping him at the club until at least June 2023.

De Gea remained as Manchester United’s first choice goalkeeper despite Dean Henderson threatening his place at times during the 2020-21 season. 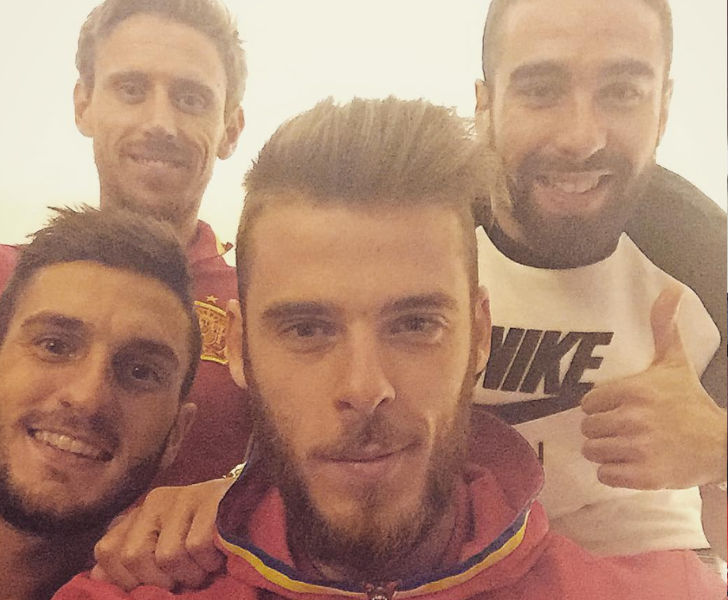 De Gea was part of the Spain Under-21 squad that won the European Under-21 Championship in 2011.

David made his senior Spain debut in a 2-0 win against El Salvador, when he came on for the final seven minutes of the friendly game in June 2014.

He was Spain’s third-choice goalkeeper for the 2014 World Cup behind Iker Casillas and Pepe Reina.

De Gea made his first full start in Spain’s 1-0 loss to France in September 2014.

The shot-stopper earned his third cap in Spain’s 4-0 win against Luxembourg in the Euro 2016 qualifier.

He managed to dislodge Casillas as Spain’s number one ahead of Euro 2016. 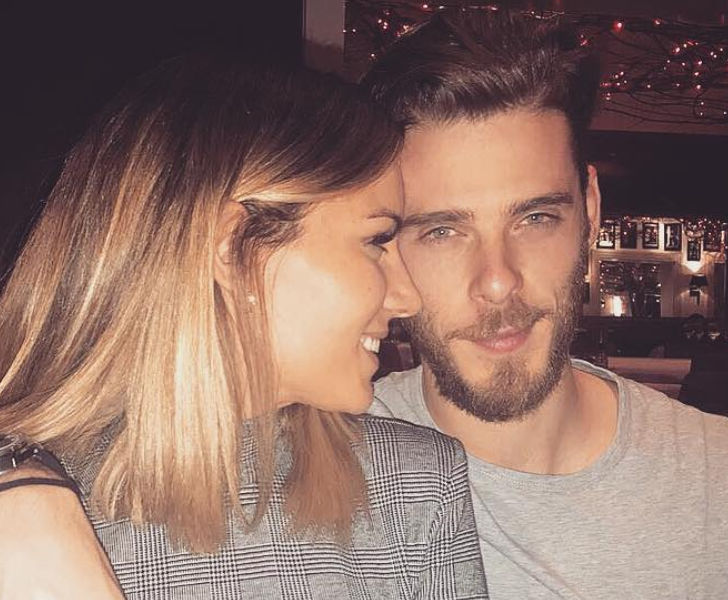 De Gea has been in a relationship with Spanish singer Edurne since 2014. The couple had their first child together, a daughter named Yanay, in March 2021.

David is reportedly a big fan of heavy metal music.

Although there is no official figure for De Gea’s net worth, Forbes estimated that the goalkeeper’s wealth stood at around $25.7m in 2020.

Of that figure, $22.7m is said to come from salary/winnings, while the remaining $3m is reported to have come from sponsorships/endorsements.

David De Gea – Did You Know?

• De Gea became British football’s most expensive goalkeeper when he moved to Manchester United in an £18.9m deal from Atletico Madrid in 2011. This transfer fee was eclipsed by Ederson after the Benfica goalkeeper’s £34.7m switch to Manchester City in 2017.

• David has won the Europa League twice during his career – once with Atletico Madrid in 2009 and again with Manchester United in 2017. He also was a runner-up in the competition with United in 2021.

• De Gea is good friends with former Manchester City striker Sergio Aguero from their time together at Atletico Madrid.