By The Sport Review
Updated on Monday 15 November 2021

Emile Smith Rowe is an English footballer who plays as a midfielder for Arsenal.

Smith Rowe joined Arsenal when he was around nine years old back in 2010 and came through the youth system at the north London club.

The midfielder was capped by England at U16, U17, U18 and U19 while progressing through Arsenal’s Hale End academy. He has also represented the U21s and made his senior England debut in November 2021.

So, how much do you know about Smith Rowe and his journey towards becoming the talented midfielder he is today? This is his story.

Emile Smith Rowe was born on 28 July 2000 in Croydon in London, England. His early years were spent in Thornton Heath in south London.

He relocated to north London with his parents and older brother after he signed for Arsenal as a nine-year-old back in 2010, joining the club’s Hale End Academy. His mother and father both work in education in north London.

His father used to play football at a semi-professional level and Smith Rowe says his dad was always an inspiration to him.

“I always looked up to my dad,” says Smith Rowe. “Just in everything I do really because I’m so close with him. He inspired me so much because he used to play football as well as a semi-professional.”

The midfielder is close to his family and has attributed them with helping to support his development as a young player.

“I never used to be confident in myself but obviously my family are around me, all the coaches have been helping me and it pushed me really,” explains Smith Rowe. “I’m so grateful for everyone around me.”

After impressing in Arsenal’s youth teams, Smith Rowe signed his first professional contract with the club on 31 July 2017.

“We’d like to congratulate Emile on his first professional contract and look forward to his continued progress in the year ahead,” read an Arsenal statement after the deal was confirmed.

When he was 17 years old, Smith Rowe joined the club’s senior team for their pre-season tour of Singapore in July 2018, when Unai Emery was in charge of the first team.

After scoring in the 1–1 draw against Atletico Madrid in the International Champions Cup on 26 July 2018, Smith Rowe signed a new long-term contract with the club. 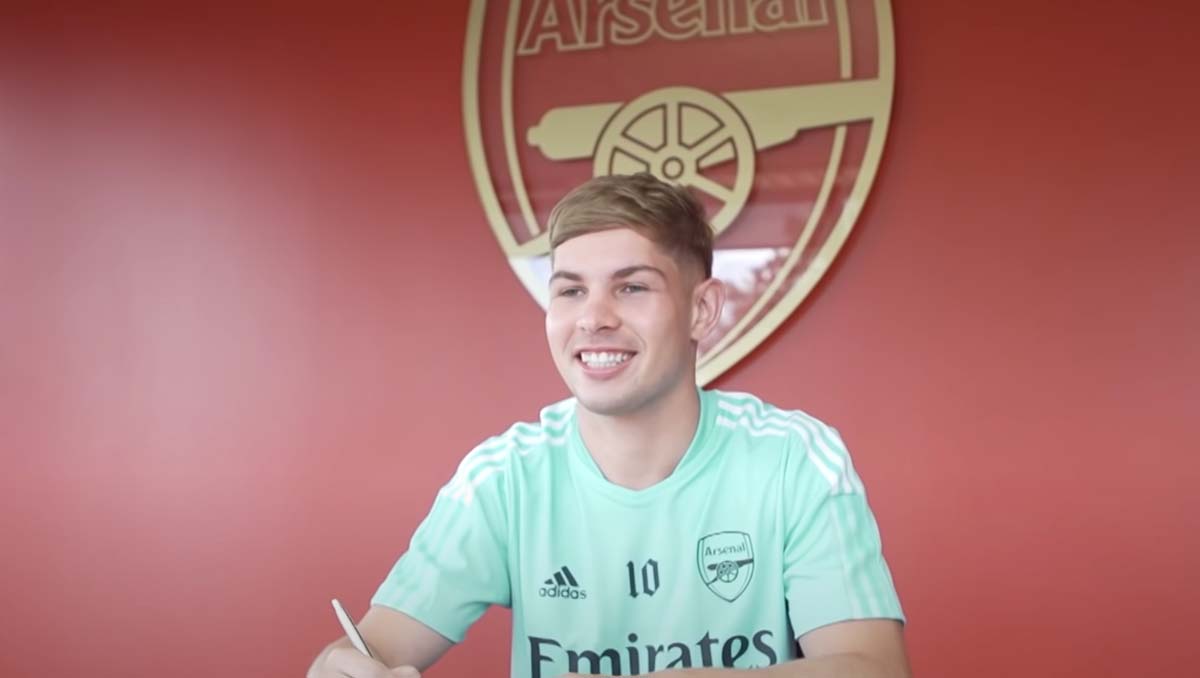 When Smith Rowe’s new contract was announced in the summer of 2018, then-Arsenal boss Emery praised the midfielder’s work-rage. “I am pleased with Emile’s contribution so far this pre-season,” said Emery. “He is working very hard and has lots of potential. I look forward to working with him and the other young players and helping them to develop as Arsenal players.”

Smith Rowe joined German side RB Leipzig on a six-month loan deal in the 2019 January transfer window. He was struggling with an injury at the time and only ended up playing 28 minutes in three substitute appearances during his time with the Bundesliga club.

The midfielder was then shipped out on loan once again in the 2020 January transfer window, this time joining Championship side Huddersfield Town until the end of the 2020-21 campaign. He scored two goals in 19 Championship appearances for Huddersfield that season.

Smith Rowe enjoyed a breakthrough season at Arsenal in 2020-21 under Mikel Arteta following his return to the club from his loan spell at Huddersfield.

After something of a slow start to the 2020-21 campaign, Smith Rowe started to impress when called upon by Arteta. He scored his first Premier League goal in the 3–1 home win over West Bromwich Albion on 9 May 2021.

He ended the 2020-21 season with two goals and four assists in 20 Premier League games, and he also scored one goal and made three assists in 11 Europa League games. He made 33 appearances across all competitions.

Smith Rowe’s impressive form earned him a new long-term contract with the Gunners in the summer of 2021. Although the terms of the deal were not disclosed, it was reported that Smith Rowe’s salary would be around £30,000 per week.

Speaking after Smith Rowe signed his new deal on 22 July 2021, manager Arteta said: “As we all saw last season, Emile is an intelligent player with excellent ability. His sharpness on the turn and exceptional vision have already made him a key player for us. 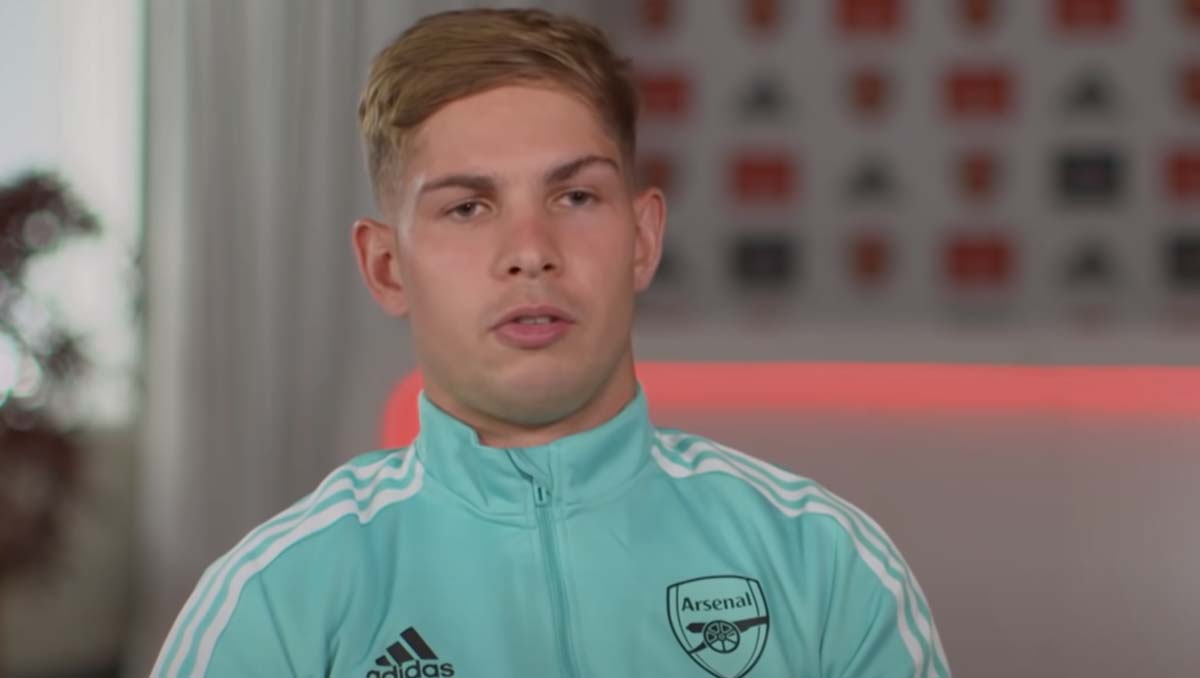 “His attitude and willingness to learn have also been very impressive. Huge credit to our team in our academy who have given Emile a great education and have worked superbly to help with his development through the age groups. I know the fans will join us in being delighted that Emile has committed his future to the club. We’re now looking forward to helping him develop further and seeing him become even more important to the strong young team we’re building.”

Smith Rowe himself could not hide his delight at signing a new deal with the Gunners and stated his desire to stay at the club for the long term.

“I feel like I didn’t really have to think about it too much you know. I’ve been at the club since I was 10 years old, so for me it was just about carrying on at this club, so like I said, I’m really happy.” 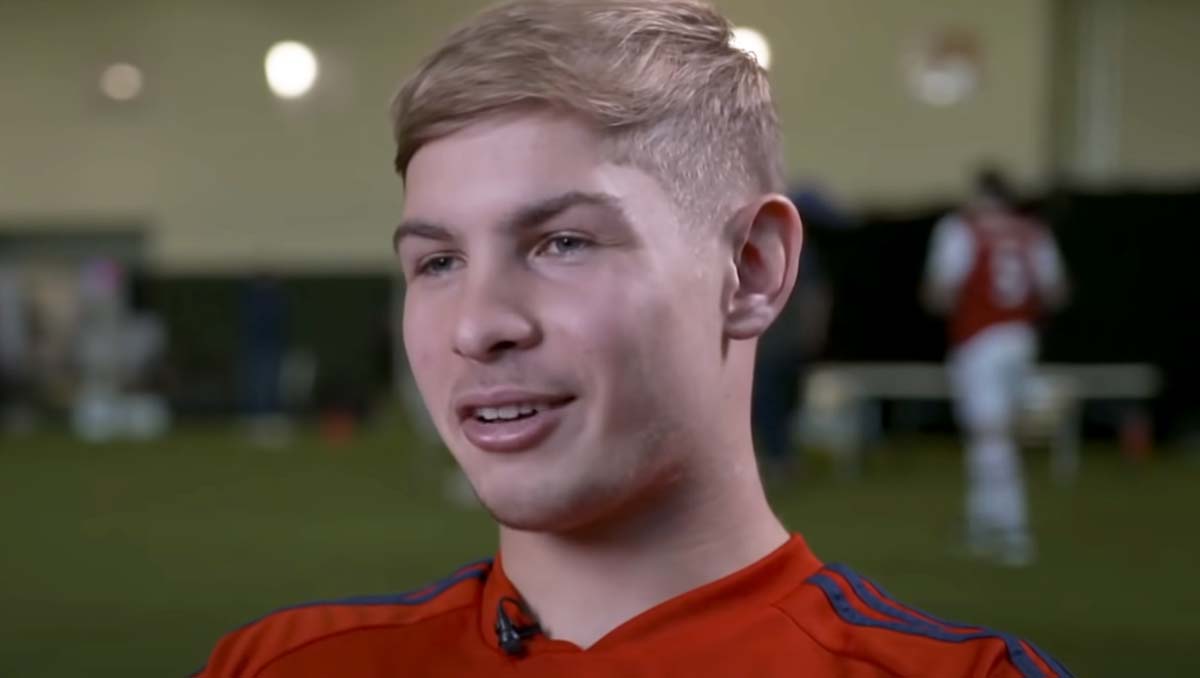 He was part of the England side that ended up being runners-up to Spain in the Uefa European Under-17 Championship in 2017.

Smith Rowe made his senior England debut on 12 November 2021, when he came on as a substitute in the 5-0 win over Albania at Wembley in World Cup qualifying.

He then made his first start and scored his first senior England goal three days later when he netted against San Marino.

Smith Rowe loves shoes and says that trainers are his favourite item of clothing. “I’ve always loved trainers. There are some designer shoes I like. When I was 17, I used to collect so many trainers. I just love shoes really.”

His favourite kind of music is House. “I like House quite a bit, House music. I just like the different beats and stuff, I just enjoy it really.”

Smith Rowe’s favourite film is the Fast and Furious series. 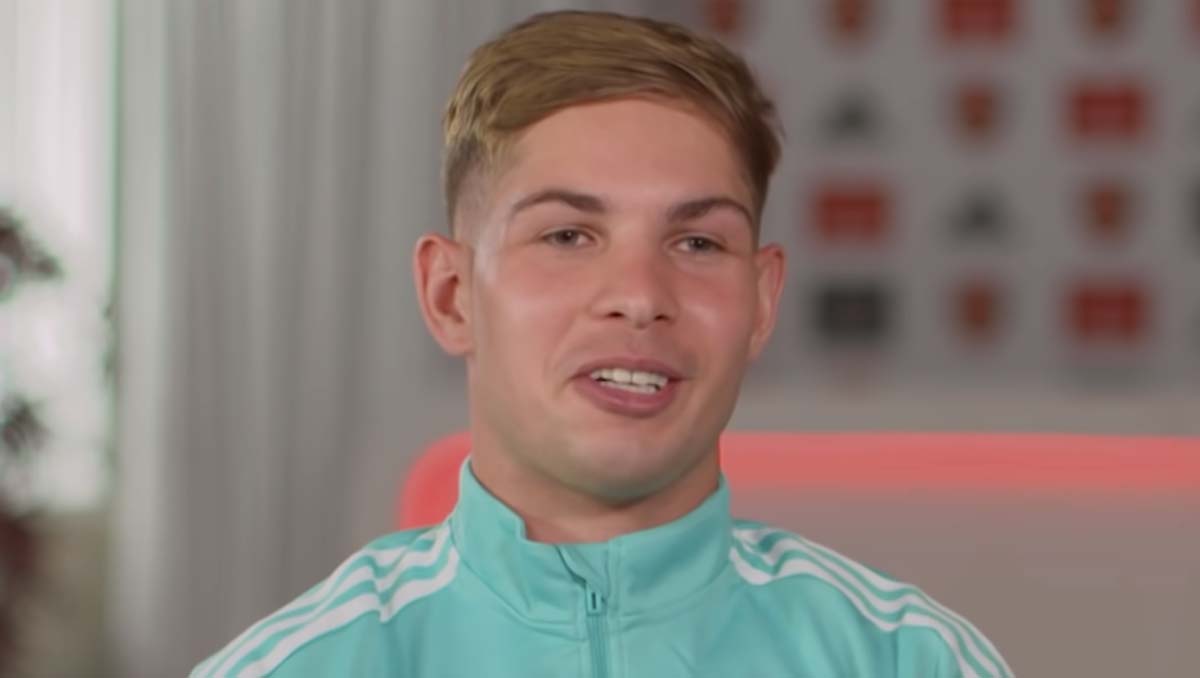 Smith Rowe has drawn lots of praise from current and ex-players alike since breaking into the Arsenal first team.

Former Manchester United star Gary Neville feels that Smith Rowe should be looking up to the likes of Cristiano Ronaldo and Mohamed Salah.

Neville said in October 2021: “Ronaldo now for 10, 15 years and Mo Salah for five, six years, and beyond. They are absolutely deadly. They are ruthless and clinical. Everything that Smith Rowe [wants to be], he’s a beautiful footballer Smith Rowe, and he’s got a long way to go in his career. Cristiano Ronaldo wasn’t as clinical and ruthless at that age. But that’s where he has got to get to – to the point where by every single game, they want to be the best. They want to score the winner. They believe they are going to score the winner. Confidence is unbelievable.”

Ex-England and Liverpool FC midfielder Jamie Redknapp heaped praise on Smith Rowe after he scored the winning goal in a 1-0 win over Chelsea FC in May 2021.

“I thought he [Smith Rowe] was excellent,” Redknapp said. “He didn’t get man of the match but I thought he was the best player on the pitch. He made things happen and everything he did, he did it with a purpose. He played in a team that pretty much sat back and defended for the whole game but I thought he was exceptional and he has been like that all season since he got into the team.”