Ethan Hazard is a youth footballer who is currently on the books of Belgian side Royale Union Tubize-Braine. He is the younger brother of Eden Hazard.

You’re probably already very familiar with his older brother. Eden Hazard plays for Real Madrid and is widely regarded as one of the finest attacking players in Europe.

But what do we know about his younger brother Ethan and does he have the potential to follow in Eden’s footsteps?

Because of his young age, there is not a great deal known about Ethan compared to his older brothers.

However, our Ethan Hazard biography is going to bring you everything that you need to know about the youngest brother in the Hazard family.

So, with the introduction out of the way, let’s start finding out a little bit more about Ethan and his potential as a professional footballer.

Ethan Hazard was born on 9 August 2003 and is the younger of the four Hazard brothers.

His older brothers are Eden, Thorgan and Kylian.

It’s fair to say that the Hazards are very much a footballing family. All three of Ethan’s older brothers have pursued careers in professional football.

The younger of the four brothers, Ethan Hazard currently plays for his local Belgian club AFC Tubize at Academy level. And so it appears that he is the fourth Hazard brother to chase a career in professional football.

Of course, because of his relative young age, not a great deal is known about Ethan’s footballing ability, aside from the fact that he currently plays as an attacking midfielder, like his older brother Eden.

Ethan Hazard’s name was mentioned in the British media in October 2018 when he was touted as a possible transfer target for Chelsea FC.

Believe it or not, should Ethan sign for Chelsea FC at some point in the future, then it would make him the fourth Hazard brother to have been at the west London club.

The widespread reports linking Chelsea FC with a move for Ethan Hazard circulated at the start of October 2018.

They originated in an article in UK newspaper the Daily Mirror, in which it was claimed that Chelsea FC were pondering a move for the youngest brother in the Hazard family.

The story was picked up by a number of national media publications in the UK as Ethan Hazard was strongly touted as a target for Chelsea FC following the appointment of manager Maurizio Sarri in July 2018.

Whether there is any truth to the rumours remains to be seen. There had been no more mention of a move to Chelsea FC for Ethan following those original reports.

However, the fact that Chelsea FC were indeed being linked with a move for Ethan suggests that the teenager has indeed been catching the eye with his footballing talent.

Ethan Hazard can be found on Instagram, where he currently has the username @ethan_hazard_10.

At the time of writing, he had just over 33 thousand followers.

He does not post very often, and he had only shared seven photos on the social network at the time of writing this biography.

Eden Hazard shared the picture below of himself and his four brothers, including Ethan, as they celebrated the new year in 2018.

Eden shared the photo below and wrote the caption: “It’s early, but before you get busy at midnight… Happy new year from me and my brothers! #2018 #family.” 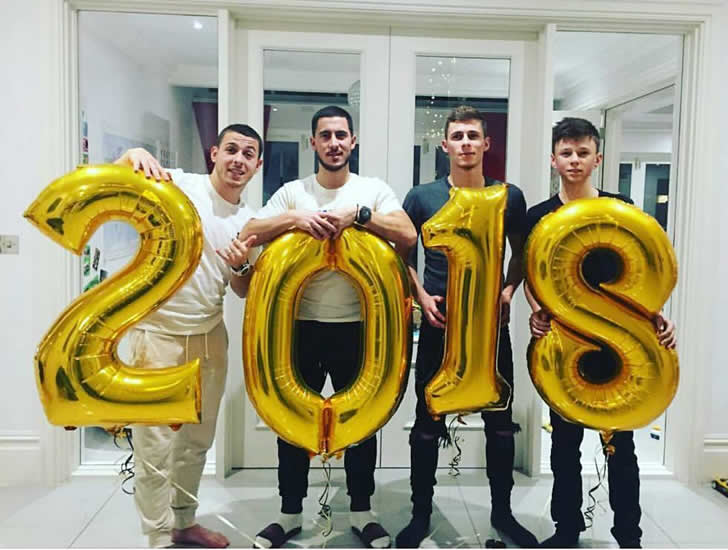 Eden Hazard shared this picture of himself with his three brothers on New Year’s Eve in 2017 Photo: Eden Hazard / Instagram

The Hazards – A Footballing Family

It’s clear that the Hazards are a footballing family, and Ethan Hazard need look no further than his brothers for inspiration in achieving his footballing dream.

Clearly, Eden, Kylian and Thorgan have all enjoyed substantial success as professional footballers.

Eden is widely regarded as one of Europe’s top attackers, and he has won every major trophy on offer with Chelsea FC aside from the Champions League, following his move to the west London club from Lille back in the summer of 2012.

Indeed, you can see Ethan Hazard posing for a selfie at the Bernabeu in the photo at he top of this article, which was posted on his personal Instagram account in August 2019.

However, what you may not know is that the Hazards also have footballing roots elsewhere in their family.

Indeed, the Hazard brothers have had football around them from close family members ever since they were born. 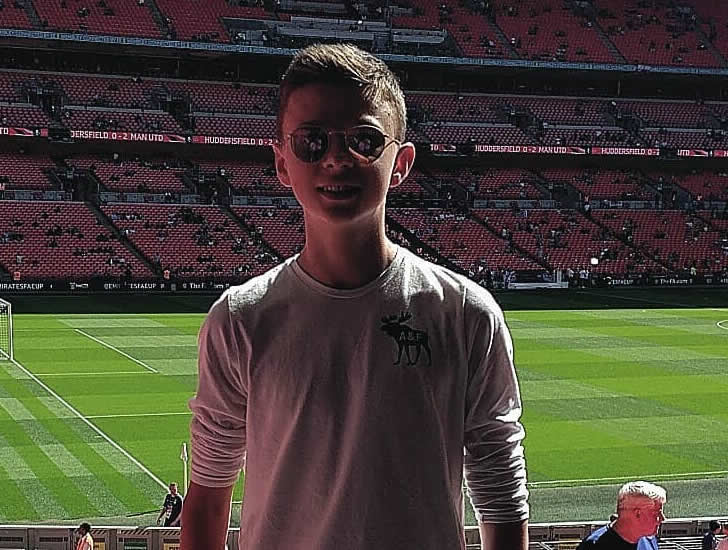 Carine Hazard – the mother of the four boys including Ethan and Eden – was a professional footballer in the Belgium Woman’s First Division but she stopped playing when she became pregnant with her eldest child, Eden.

And, believe it or not, Ethan’s father Thierry was also a footballer. He spent most of his career at semi-professional level with La Louviere in the Belgian Second Division.

Whether Ethan Hazard has what it takes to make it as a professional footballer at the top level remains to be seen.

But one thing is for sure, he will have plenty of support and experience to lean on from his closest family members if he is indeed to pursue a career in top-level professional football.

So, that brings us to the end of our Ethan Hazard biography for now.

We hope you enjoyed reading about the youngest brother in the Hazard family and his apparent potential to pursue a career in professional football.

As Ethan gets older, there is bound to be more media coverage about his footballing ability, and we will update this page in the coming months and years with the latest information.

If you’re interested in learning more about another Hazard brother, check out our Eden Hazard biography.