By The Sport Review
Updated on Monday 29 November 2021

Jadon Sancho is an English footballer who plays as an attacking midfielder for Manchester United.

Born in London, the winger started his career as a youth player at Watford when he was seven years old, before moving to join Manchester City’s set-up in 2015.

He then signed for German side Borussia Dortmund in 2017 and made his first Bundesliga start for the club in January 2018.

The attacker made his first appearance for the senior England team in October 2018.

Sancho scored 50 goals in 137 games for Dortmund before he earned a big-money transfer to Manchester United in the summer of 2021.

So, how much do you know about Sancho’s journey to becoming the talented footballer he is today? This is his story.

Sancho was born in south London on 25 March 2000 to parents from Trinidad and Tobago. He spent his early years living on an estate in Kennington, just south of the River Thames.

“After school I always just wanted to play football,” Sancho said. “Around me a lot of people were doing some bad things, but I didn’t want anything to do with that.”

Sancho regularly football at a local park near his home, sometimes with boys much older than him, and it was there that he honed his skills.

“I was on an estate,” Sancho told Sky Sports in 2018. “There’s a park behind that we called Blue Park, and we used to just go there and for two hours just play mini games, everyone used to get so into it. I used to have all the tricks, nutmeg people, and I was doing it like the older boys.

“They played properly so they didn’t want to hurt us younger boys. But they thought I was ready to play with them. I’d call myself a street footballer, that’s where I learned my tricks and through football I looked at the big players, I think it really helped me.” 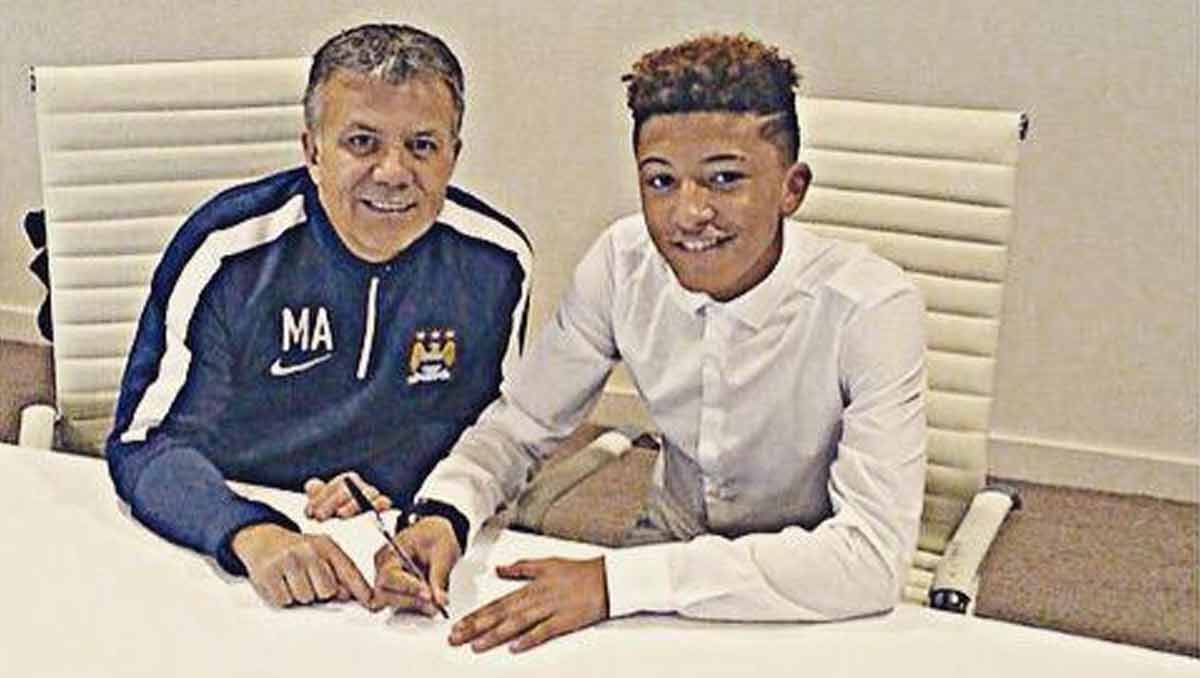 One of Sancho’s footballing idols is Brazil legend Ronaldinho. “Ronaldinho was a big influence on me, watching him on YouTube, he used to do things that other people didn’t really used to do,” he said.

Sancho has also revealed that he was a Chelsea FC fan when he was a youngster, with Frank Lampard and Didier Drogba among his favourite players.

Asked who his England hero was as a youngster, Sancho told talkSPORT: “I’d probably say Frank Lampard. I was a Chelsea fan growing up, I can’t lie! Didier Drogba and Frank Lampard were my favourite players at the time.

“I just love Frank Lampard and how he played his game – he was so direct and so composed on the ball. I like things like that.”

Sancho joined Watford’s youth set-up when he was just eight years old, and moved into accommodation provided by the club.

On 7 March 2015, when he was 14 years old, Sancho signed for Manchester City from Watford.

Sancho tweeted a picture of himself signing his first Manchester City contract on the day and wrote: “Thank you for everything @watfordfc! Hello @MCFC very happy to be joining such a great club.”

He admitted that his move to Manchester City was a huge moment in his career and that he was surprised that the Premier League club came calling.

“When they came along, I couldn’t quite believe it, but I think it helped a lot,” Sancho said in 2018. “I went from being a big fish in a small pond to going to City with a lot of top players, I felt like I had to work really hard to be the best.

“The players helped me. They were good players. It helped me mentally, physically, and tactically because physically wise they were a lot stronger and quicker than me. At the time, I had a lot of improvement to do coming from a category three academy and eventually I caught up and started competing.”

Sancho was presented with the opportunity to sign for German side Borussia Dortmund, and he joined them for a fee of around £10m as a 17-year-old on 31 August 2017.

The attacking midfielder explained that he jumped at the chance to sign for Dortmund because he felt he was ready to prove himself at the elite level on a regular basis.

“It was leaving home on another level, a different country, I’d never done it before and didn’t know how I would cope,” Sancho said. “I felt like I was ready for first-team football, so I wanted to do something different. Dortmund have a lot of young talented players and a lot of history, so at the time I was looking at Christian Pulisic and he was about 18 or 19, and I just looked up to him and thought I could do the same thing.”

Sancho made his first-team debut for Dortmund on 21 October 2017 when he came on as a substitute in the 84th minute during the 2-2 draw away to Eintracht Frankfurt.

He was made to wait a few months before making his first Bundesliga start for the German club. It came on 14 January 2018, when he was named in the starting line-up for the goalless draw against Wolfsburg.

Sancho netted the first senior goal of his career when he scored the opener in Dortmund’s 4-0 victory over Bayer Leverkusen in the Bundesliga on 21 April 2018. He also notched up two assists during the game.

The attacking midfielder was rewarded for his promising form with a new contract at Dortmund in October 2018 to keep him at the club until 2022.

He went from strength to strength and was named as the Bundesliga player of the month for October 2018 after scoring three goals and making one assist in three league games.

Sancho netted his first career hat-trick in a 6-1 Bundesliga win over Paderborn on 31 May 2020, making him the first English player to score an overseas treble in one of Europe’s major leagues for 31 years.

The attacking midfielder, who by this point was being regularly linked with a move back to the Premier League, scored twice in the 2021 DFB-Pokal Final to help Dortmund claim a 4–1 win over RB Leipzig and secure the trophy.

Sancho’s fine form for Dortmund had prompted speculation linking him with a transfer to Manchester United.

In the summer of 2021, the Red Devils finally completed a move to bring the winger to Old Trafford. The Red Devils completed the transfer on 24 July 2021 for a fee widely reported to be around £73m.

The move made Sancho the second-most expensive English player in football history at the time, just behind his new team-mate Harry Maguire, who joined Manchester United for £80m from Leicester City in 2019.

Sancho made his first Premier League appearance for Manchester United on 14 August 2021, when he came on to play the final 15 minutes of the 5-1 win over Leeds United at Old Trafford. He then made his Champions League debut for the Red Devils during the 2-1 defeat by Young Boys on 14 September. 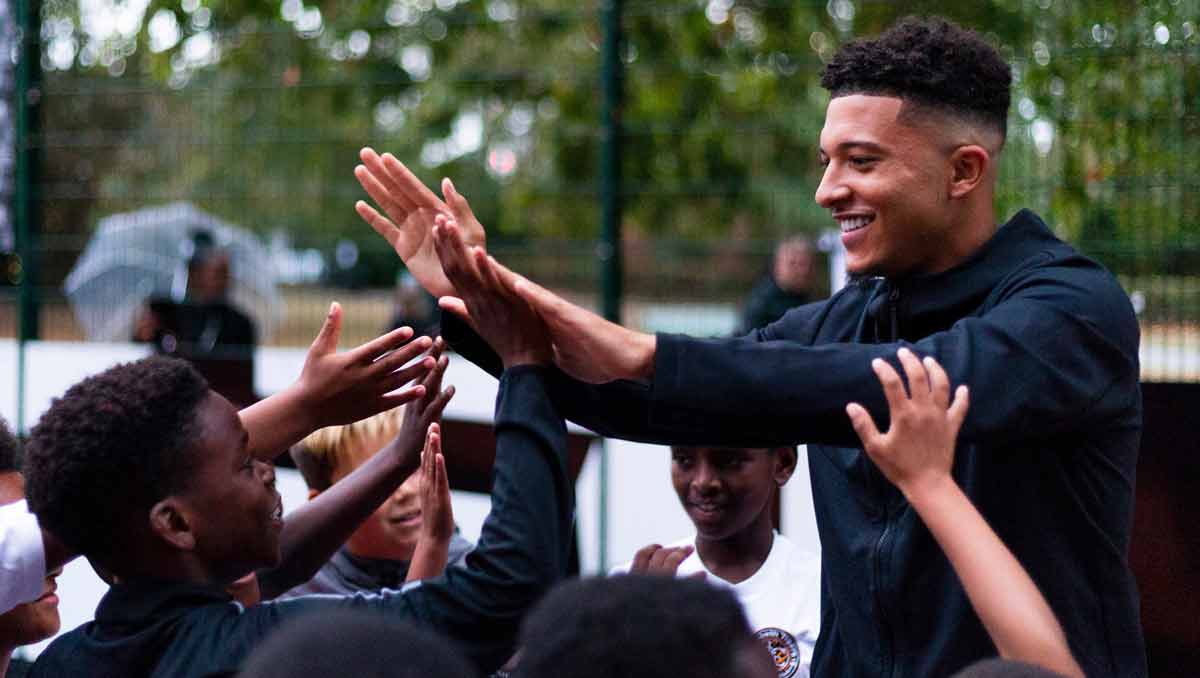 After impressing at youth level and helping England to win the Fifa U17 World Cup in 2017 (he featured in the group stage before linking up with his new club Dortmund), Sancho was called up to the senior England team in 2018.

He made his first senior appearance for England when he came on as a 78th-minute substitute in the goalless draw with Croatia in the Uefa Nations League on 12 October 2018. In doing so, he became the first player born in the 2000s to play for England. At 18 years and 201 days, he was also the second youngest England player to win his first cap in a competitive game.

Sancho scored his first two goals for England during the first half of the 5-3 Euro 2020 qualifying win over Kosovo on 10 September 2019.

At Euro 2020, he made one start and three appearances in total. He was brought on as a 120th-minute substitute in the final against Italy but missed his penalty – England’s fourth in the subsequent shootout – when his spot-kick was saved by Gianluigi Donnarumma before Italy claimed victory. 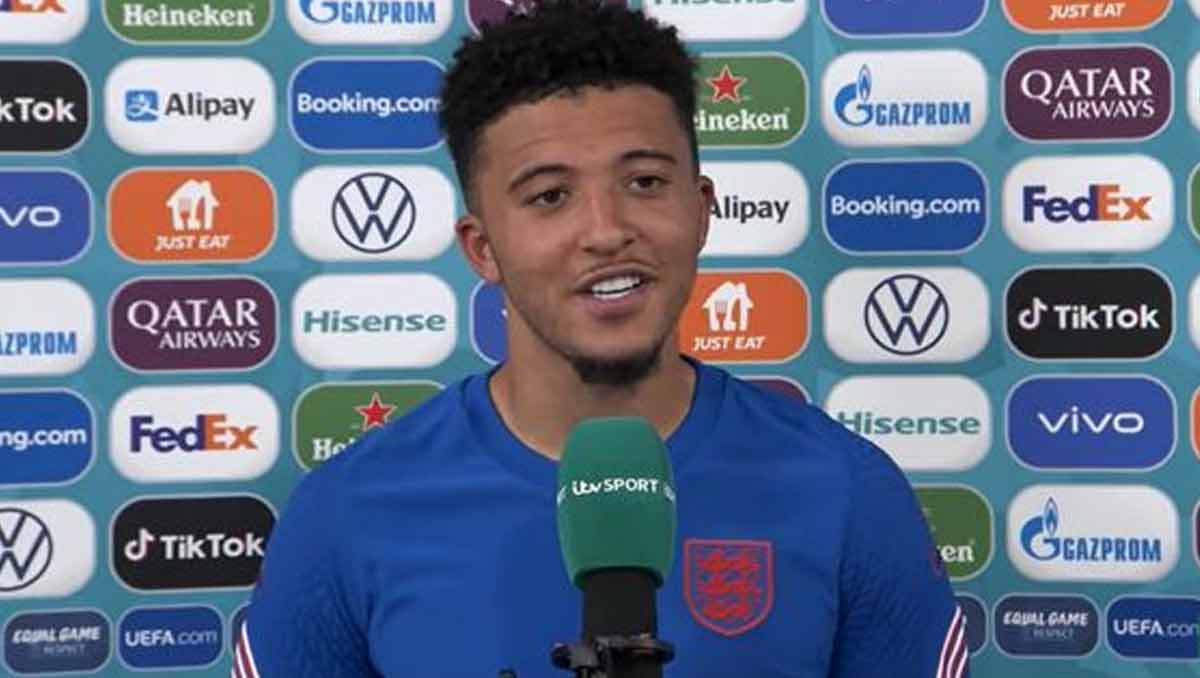 Sancho is close friends with fellow English footballer Reiss Nelson, who came through the ranks at Arsenal at the same time that the attacking midfielder was making his mark at Watford.

“We go way back,” Sancho said of Nelson. “I first met Reiss when I was playing for Watford. We used to play each other in Southwark youth games. That’s how we got really close. We always used to link up and do little things – go to the cages, kick a ball with our friends.”

England legend Gary Lineker was excited by the news of Sancho signing for Manchester United in the summer of 2021.

After the transfer was confirmed, Lineker tweeted: “Very excited to watch this incredibly talented young man play in the Premier League.”

“I think Jadon Sancho could be a superstar, I really do,” Carragher said. “You look at his numbers in German football, in a top league with a top club, at Borussia Dortmund. They’ve been after him for a while and they need that player on the right side. At times, I think he’s as good on the left when you look at his stats at Dortmund. You’re getting one of the superstars from the Bundesliga.”

Manchester United legend Rio Ferdinand was also excited about his arrival at the club.

“I speak to the guys who are there [at Carrington about Sancho] and the feedback is that there is more than what they expected. We all know he’s got flair and the skill and he’s going to excite these fans. “He will get them on the edge of their seats. There’s more to Sancho than just that. There’s an end product and he’s got a winning mentality.”