By The Sport Review
Updated on Monday 4 April 2022 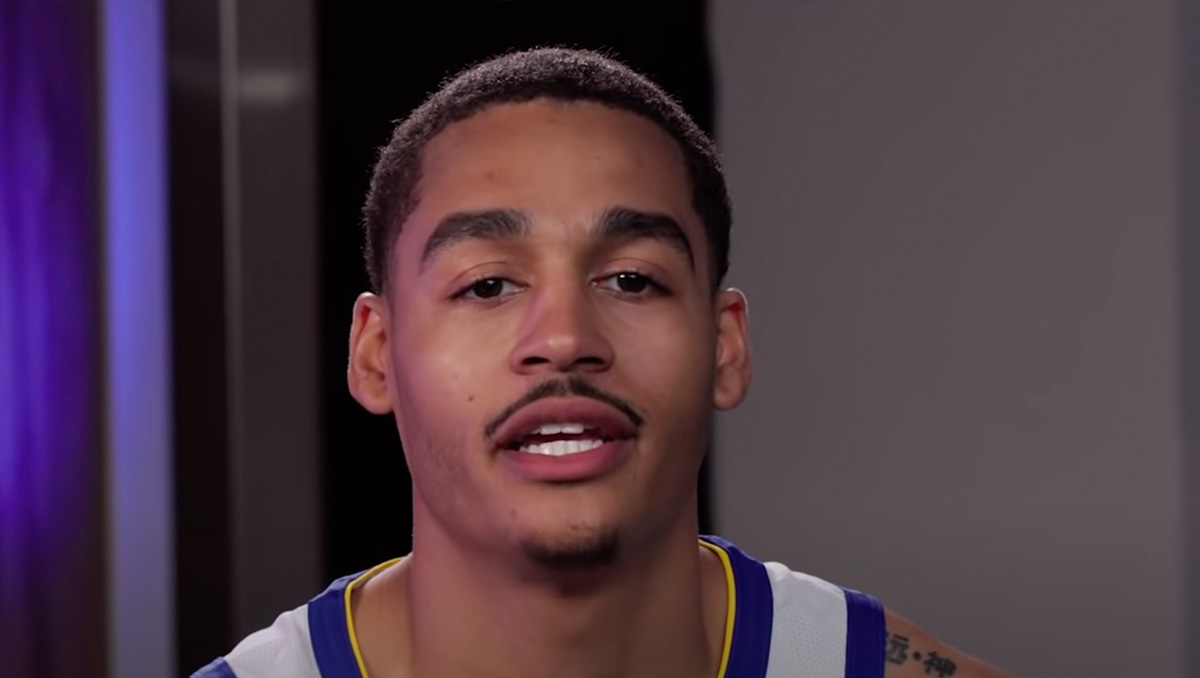 Jordan Poole is an American basketball player who plays for the Golden State Warriors.

The 22-year-old was born in Milwaukee, Wisconsin in the United States of America and represented Michigan Wolverines at college level.

Poole was the 28th pick in the 2019 NBA draft after the Warriors added the shooting guard to their roster.

After two seasons as a rotation player for the Golden State Warriors, Poole played in a more prominent role for the Dubs in the 2021-22 season in the absence of Klay Thompson.

Poole produced one of his best performances for the San Francisco franchise with a 30–point haul in a 118-104 victory over the Miami Heat on 23 March 2022 before he followed it up with 38 points in a 107-103 defeat by the Phoenix Suns at the end of the month.

So, what do we know about Poole’s journey to becoming one of the most-exciting talents in the Warriors’ roster? This is his story.

Jordan Poole (full name: Jordan Anthony Poole) was born on 19 June 1999 in Milwaukee, Wisconsin in the United States of America. 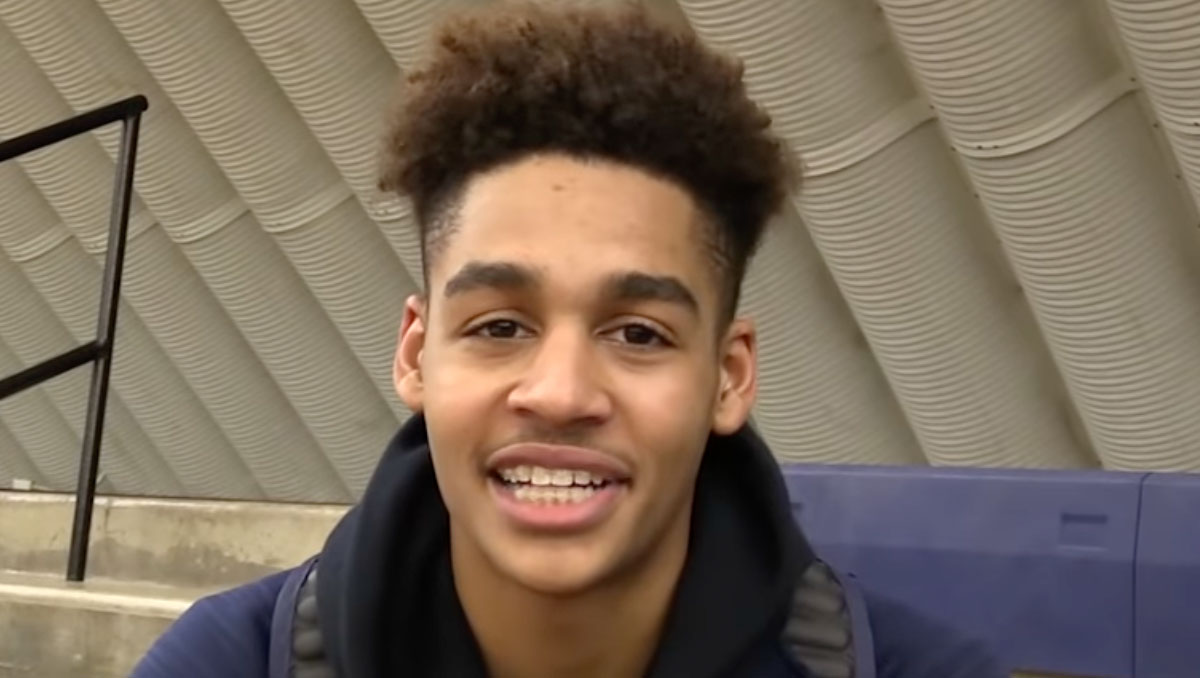 The son of Monet and Anthony Poole, he excelled across a number of sports, including football, baseball and basketball before a conversation with his father prompted him to focus on a potential NBA career.

Speaking to NBC Sports about one incident after a basketball tournament when Jordan was 12 or 13, his father Anthony shared his words of advice for his son.

His father Anthony said: “I said, ‘Hey, you say you want to go to the [NBA] league. That tournament was good. You did OK. But it was BS. You’re not putting in the effort to get where you want to get to. You’ll be lucky if you’re an overseas player.’

“What Jordan did was go and write down what I said. He took a thumb tack and put it on his bedroom door. I could see it every time I walked past his room. He had it up there for about a year-and-a-half.”

Jordan played as a freshman at Rufus King High School in Wisconsin before he transferred to La Lumiere School in Indiana for his senior year.

He executed a buzzer beater in La Lumiere’s 70-52 victory over Monteverde in the Dick’s Sporting Goods High School Nationals championship in 2017, finishing with 13 points and hitting 3 of his 7 three-pointers. 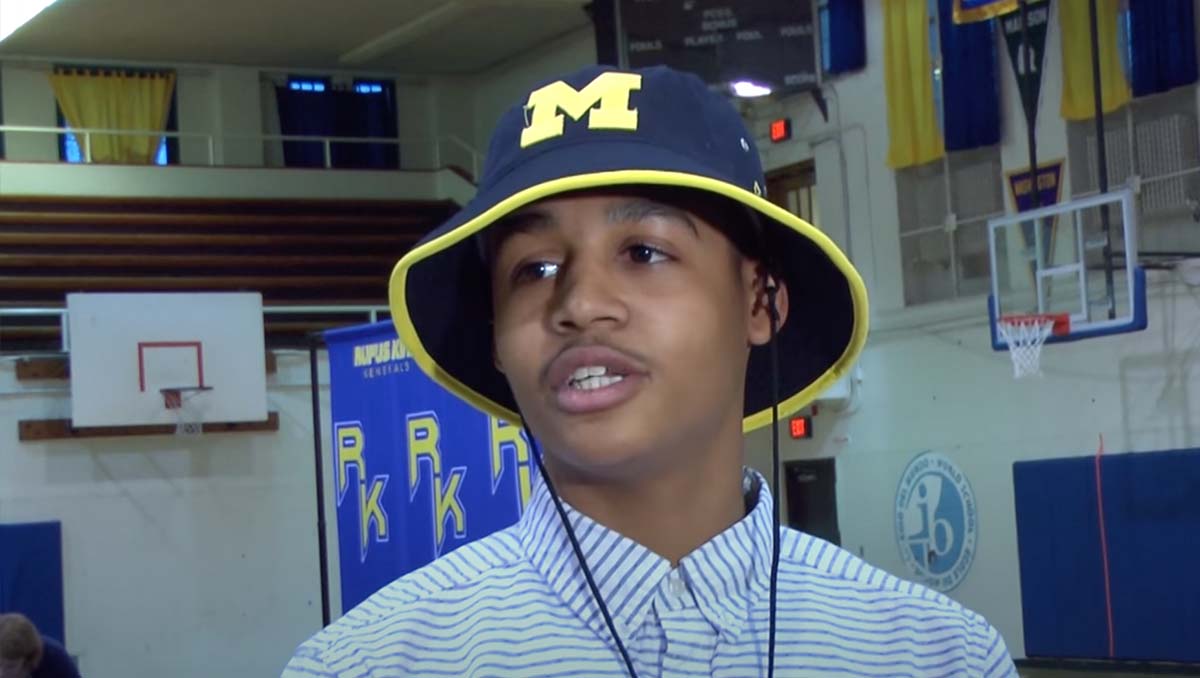 On 23 October 2015, Poole committed to playing college basketball for the Michigan Wolverines before he signed his national letter of intent around 13 months later.

Poole finished his Freshman season (2017-18) in impressive style with three straight double digit scoring efforts against Ohio State, Penn State and Maryland in the spring of 2018.

He continued his promising form with a game-winning buzzer beater three-point shot to help Michigan beat Houston 64-63 in the second round of the 2018 NCAA Tournament.

“We work on that play thousands of times in practice,” Poole said of his game-winning shot. “We executed it perfectly, especially from the inbounds pass, getting it to our senior guard Muhammad. Ham could have put the shot up easily, but he had the confidence to find me, and I just knocked the shot down.

“I think the guys on the team know that I never lose confidence. You’ve just got to always be ready for the opportunity and for the moment.”

Poole helped Michigan to reach the NCAA Division 1 Men’s Basketball Championship Game thanks to his seven points against Loyola-Chicago in the semi-final before losing to second seeds Villanova.

A year later, he was instrumental in helping Michigan reach the Sweet 16 stage of the NCAA Division 1 Tournament for the third successive season before he declared for the 2019 NBA draft after the tournament.

Poole was drafted 28th overall in the first round of the 2019 NBA draft by the Golden State Warriors on 20 June 2019. He committed to a guaranteed contract reported to be worth around $6.2m over three years. 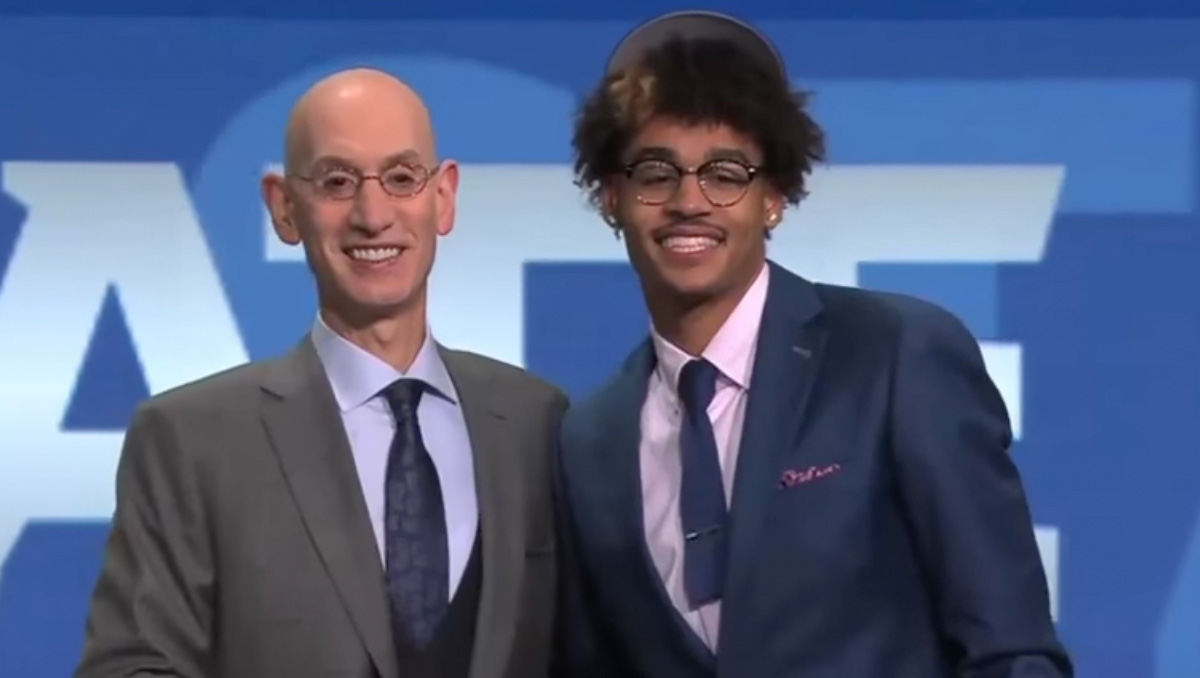 Speaking about his game after he was drafted by the Warriors, Poole said: “I’m a shooter. I make shots. It’s what I do. If I don’t make a couple of shots, I can’t just stop shooting. I’m being aggressive.”

Warriors head coach Steve Kerr, who was preparing for a 2019-20 campaign without shooting guard Thompson, admitted that the Dubs needed a player of Poole’s shooting calibre in an interview with The Athletic six days after the draft.

“There’s no doubt about his shooting ability and we needed that desperately,” said Kerr. “Defensively, you put him out there and you see what he’s got and then you start working with him and try to get guys better and better.”

Poole made his NBA debut in the Warriors’ 141-121 defeat by the Los Angeles Clippers, coming off the bench to contribute five points, two rebounds, two assists and a steal.

He played 57 times for The Warriors in his first season in the Bay Area and finished with an average of 22.4 minutes per game and 8.8 points per game as Poole benefited from the long-term absences of Steph Curry and Thompson due to injury. 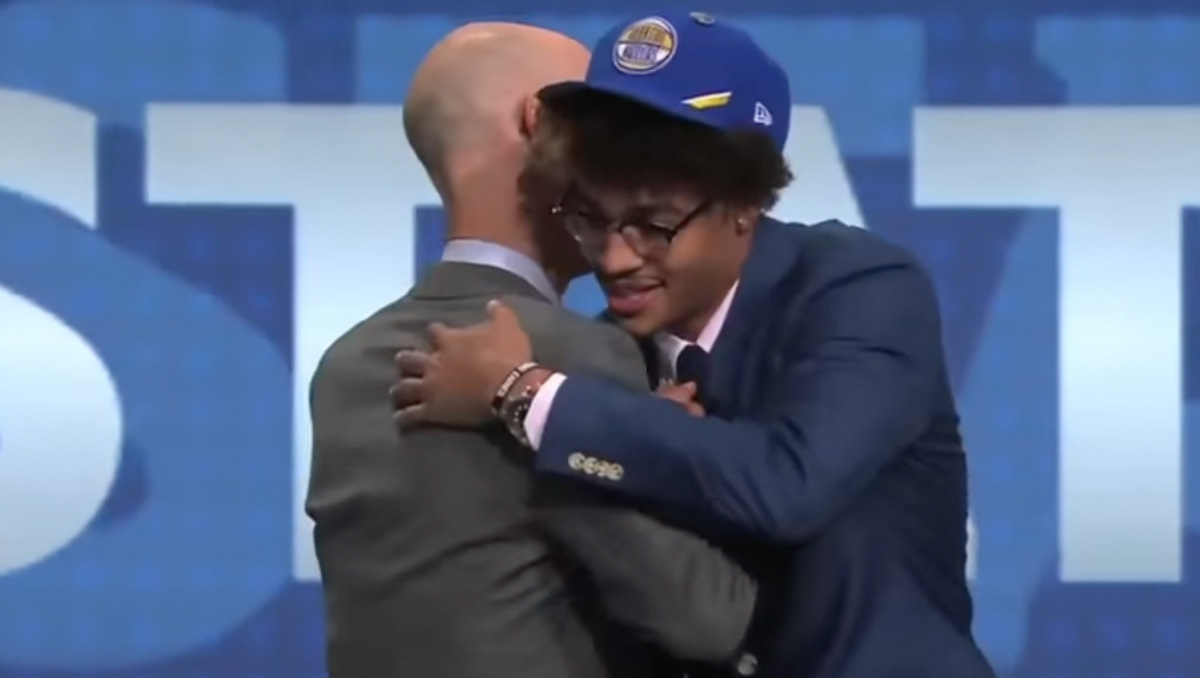 Warriors head coach Kerr underlined Poole’s progress by making the No3 his starting shooting guard for the 2021-22 season ahead of Otto Porter Junior and Damion Lee.

Poole hit eight three-pointers in a 33-point return in the Warriors’ 119-104 victory over the Toronto Raptors in November 2021.

The former Wolverine continued to be a shining light in the Warriors despite Thompson’s return in the spring of 2022 ahead of the NBA Playoffs.

Poole produced a 30-point game against the Miami Heat in mid March before he ended the month by equalling a career-best 38 points in a 107-103 defeat by The Suns. 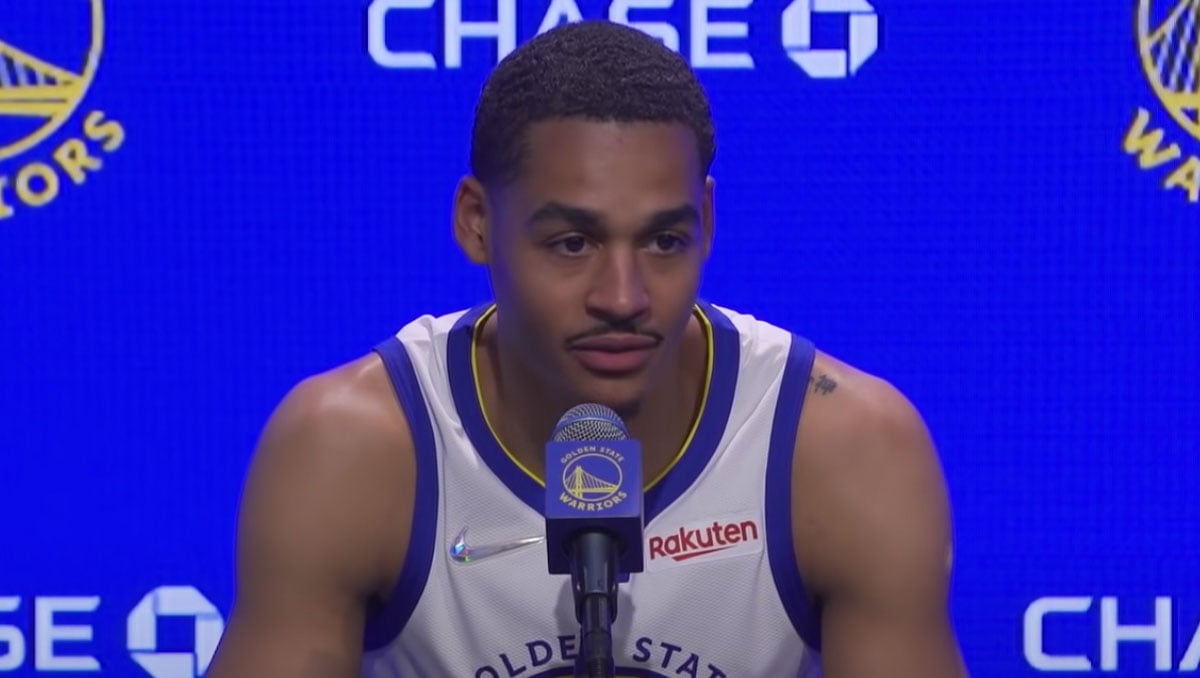 Poole revealed the role that Curry plays on court as a mentor to both him and other players.

“Coming from the top of the food chain all the way down, everybody is excited for each other, wants to see everybody succeed. Steph [Curry] was just talking to me the entire game, the entire game just giving out any piece of advice, personally and as a team,” Poole told NBC Sports after a depleted Warriors team beat the San Antonio Spurs in February 2022.

Poole lives in the Bay Area with his two Maine Coon cats called Kota and Kai.

He has revealed that he had to leave his rescue stray cat called Lizzie with his mother back in Michigan after he was drafted. Poole helped his team-mate James Wiseman to rescue a cat from the same Bay Area organization that he adopted Kota and Kai. 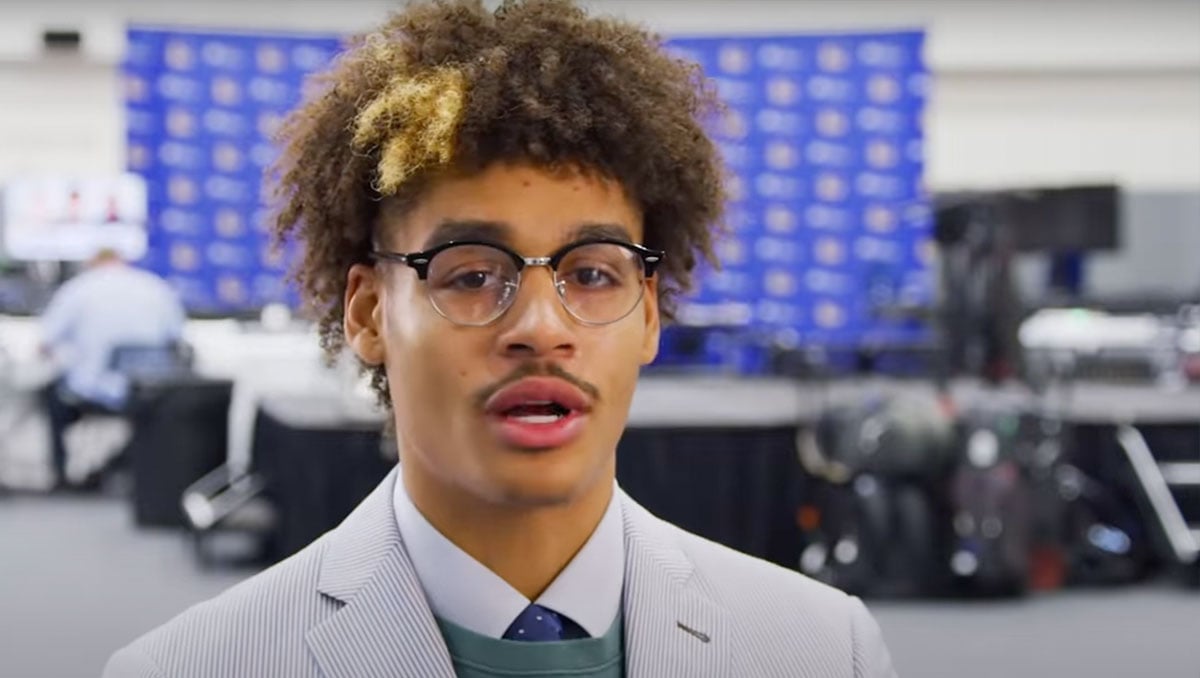 Steph Curry highlighted Poole’s potential as a game-winner for The Warriors despite a difficult night at Minnesota in February 2022: “Yeah, he has been asked to do a lot of different things this year, and he is still coming into his own as an experienced player. He’s had some success, had some struggles, but honestly, just making sure he is engaged. That’s the biggest thing. No matter if he is making shots or not, how many minutes he is playing. Just making sure he is engaged because he is going to help us. He is going to help us win games when it matters.”

Klay Thompson on Poole’s potential as a future NBA All-Star after his 24-point games against the Atlanta Hawks in March 2022: “He’s just a cerebral player and to see how much he’s grown since his rookie year, his one-on-one ability is incredible, his ability to read the floor is also incredible. Jordan [is] another one who will be rewarded in free agency because his future is so bright. He wants to be great and you need that confidence to be great. I’m so proud of Jordan and we need him to make a run this year.”

In typical Steve Kerr fashion, the Warriors head coach underlined the importance of Poole continuing to learn the importance of being a team player: “Part of the message for Jordan is the same message the whole team gets. It doesn’t matter what your role is — play your ass off every night. Yes, it is hard to change your role in the middle of the season. But who cares? It’s your job.”