By The Sport Review
Updated on Wednesday 6 April 2022 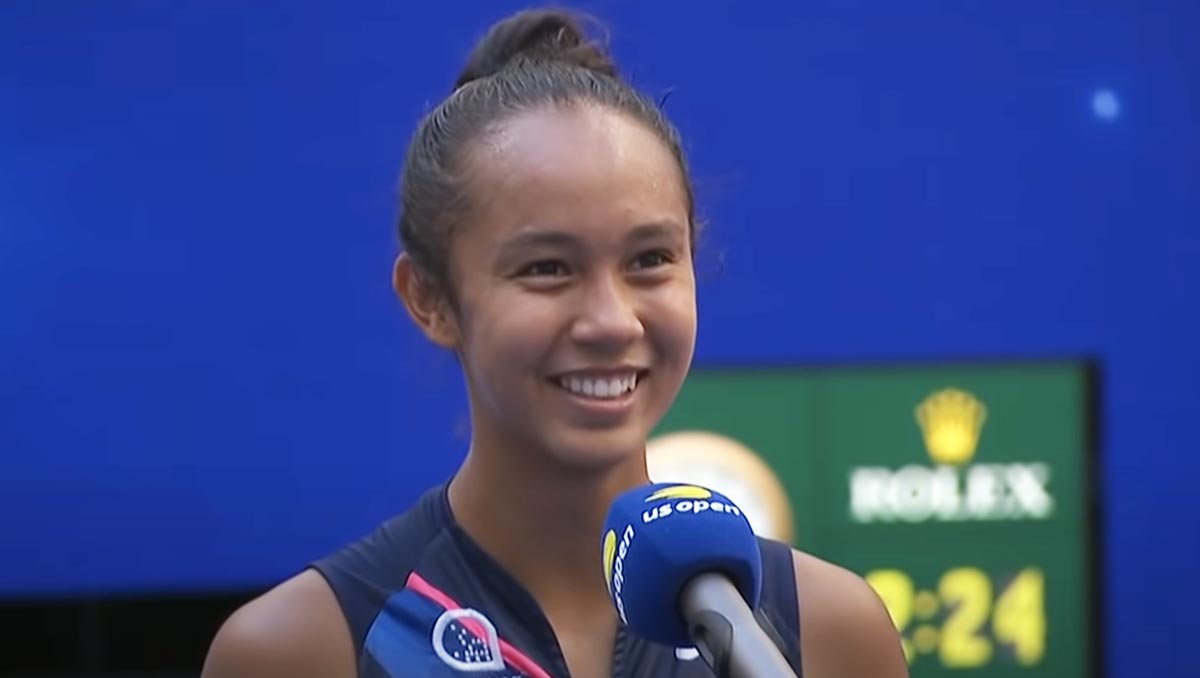 Leylah Fernandez is a Canadian tennis player. She enjoyed a breakthrough season in 2021, reaching the US Open final, where she lost to Emma Raducanu.

Born in Montreal, Canada in 2002, Fernandez played the first events of her professional tennis career on the ITF Circuit in the USA and Canada in 2017.

After winning her first WTA Tour match in 2018, Fernandez enjoyed an impressive climb up the women’s rankings, culminating in her remarkable run in 2021 – when she reached the US Open final after having also claimed her first WTA Tour title earlier in the year.

But what do we know of Leylah’s story and her journey towards becoming a professional tennis player? This is her story. 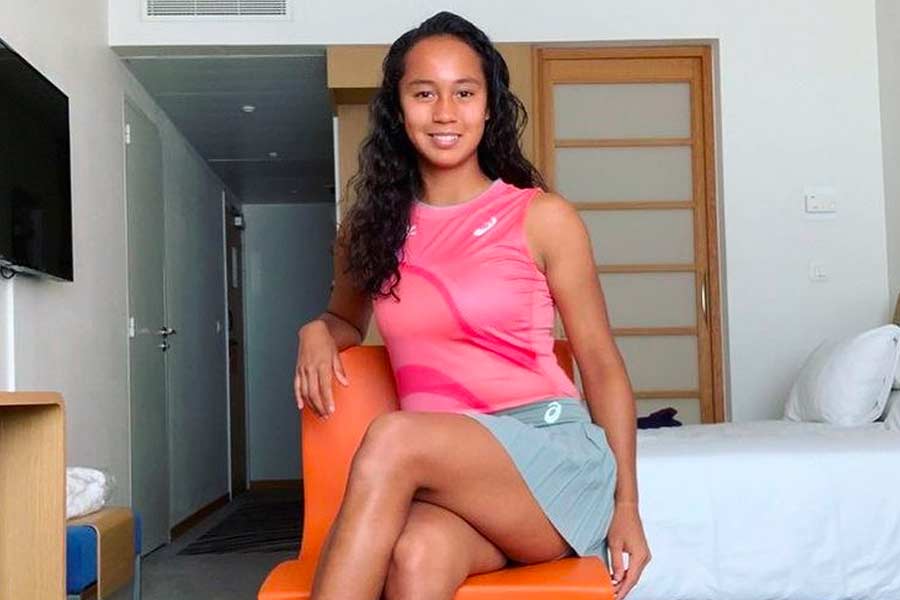 Leylah Fernandez (full name: Leylah Annie Fernandez) was born in Montreal, Quebec on 6 September 2002. Her father Jorge is from Ecuador and her mother Irene is a Filipino Canadian. Her younger sister Bianca also plays tennis.

She is the second-born of three children and speaks English, French and Spanish fluently. Fernandes, a left-hander, started playing tennis aged five and began competing when she was 10.

Fernandez showed a passion for sports from an early age and played football, volleyball and competed in track-and-field. However, it was tennis that captured her attention, and she would spend hours practising hitting her shots against the basement wall.

Her parents enrolled her in a a provincial development program in Montreal (which was in partnership with the national program) but she ended up being cut from it at a young age.

It was at this point that Fernandez’s father Jorge – a former soccer player – stepped up to become her coach, despite not having played tennis himself. 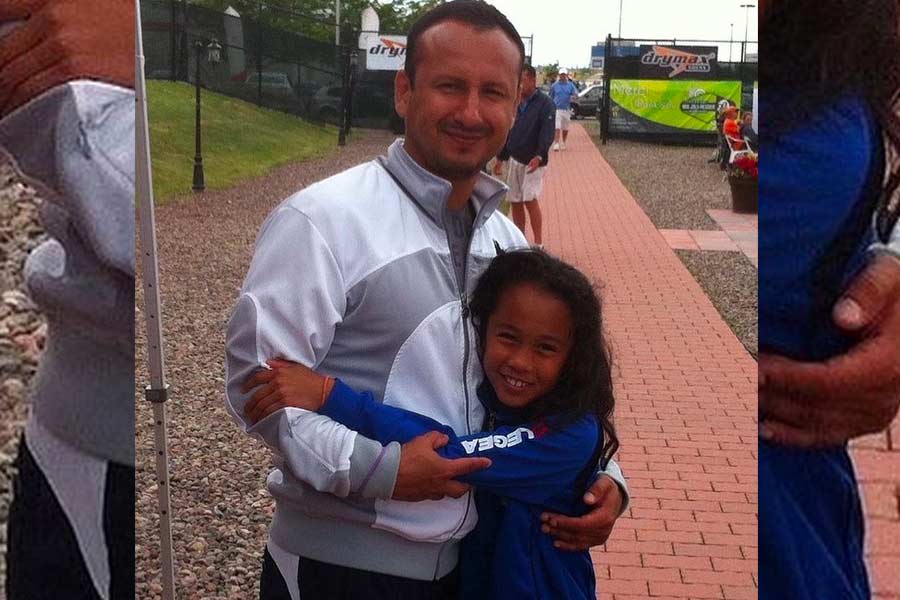 Fernandez’s father Jorge told CBC Sports: “She was crying and I’m looking at this little girl, ‘Honey, is this really important for you?’ She said yeah and that she really wanted to play. I said, ‘If you want, I’ll coach you.'”

Fernandez feels that the support from her parents during her formative years was key to laying the foundations for success further down the line.

“With the help of my dad, him learning with me and my younger sister, too, and also my mom, they were all there and just encouraged me and told me that if I want to stop playing tennis, I can,” Fernandez told CBC Sports.

“Tennis is not the only thing in life that’s going to make you happy but, for me, I just kept improving, kept my head down and kept working. With time, a few years later, the results came and more opportunities came my way too.”

While growing up and developing her game, Leylah drew inspiration from former world number one Justine Henin, who enjoyed a sparkling career including seven Grand Slam titles and an Olympic gold medal.

“She’s not the biggest player nor the strongest player but she always found a solution playing against bigger players,” Leylah said of Henin, in the same interview with CBC Sports. “She had the talent, great hands, slices and drop shots to open up the court where not many could, and that inspired me that I could do it, too, and I want to inspire other kids to believe they can do it, too.” 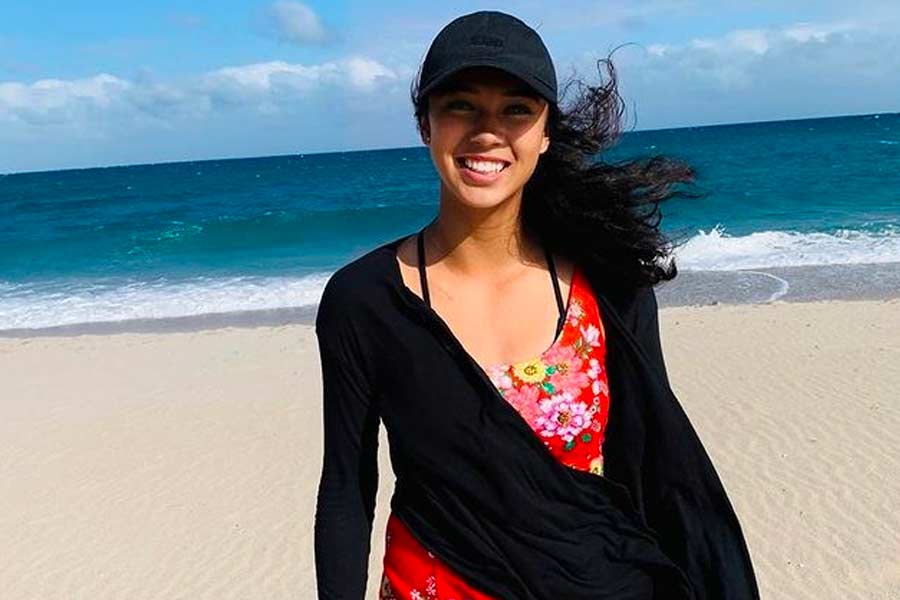 Fernandez turned professional in 2017, earning a total of $3,608 in prize money for that year in both singles and doubles.

In 2018, Fernandez played and won the first WTA match of career by reaching the second round at Quebec City, beating fellow Canadian Gabriela Dabrowski 6-3 7-5 in round one after receiving a wildcard. She ended up losing to Great Britain’s Heather Watson 6-4 7-5 in the next round.

Later that year, Fernandez won the Roland Garros junior title to become the first Canadian to win a junior Grand Slam singles title since Felix Auger-Aliassime clinched the junior US Open in 2016.

In 2020, Fernandez made her WTA debut when she came through three rounds of qualifying and reached the first round of the Australian Open, where she lost in straight sets to American Lauren Davis.

Later that year, she reached her first WTA Tour level final at Acapulco. She ended up losing to Heather Watson in the final in three sets, 4-6 7-6 6-1. Her impressive run in Mexico came after she reached the quarter-finals of the 2020 Monterrey Open.

In March 2021, Fernandez won her first senior WTA title at the Monterrey Open, beating Switzerland’s Viktorija Golubic 6-1 6-4 in the final. She won the tournament without dropping a single set. 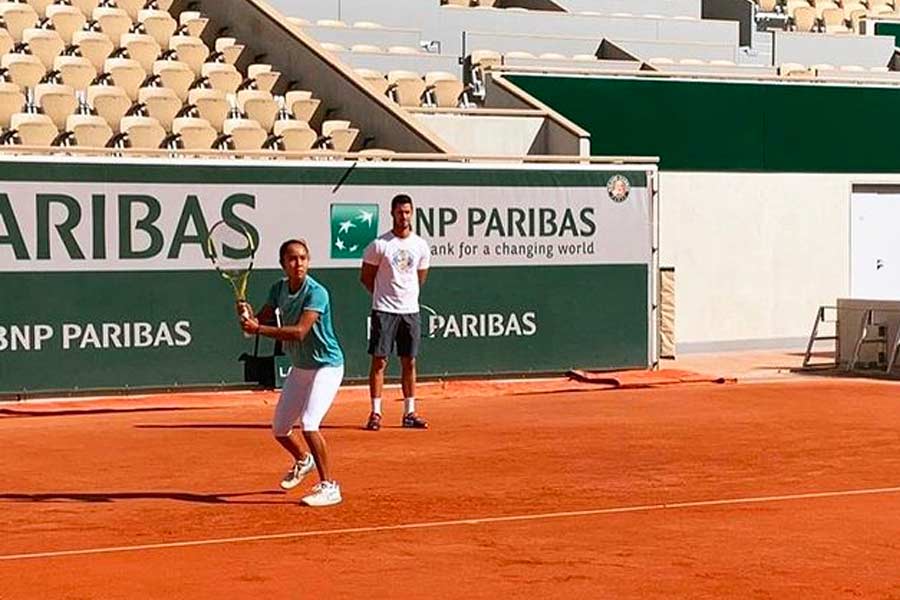 Fernandez enjoyed a spectacular run to the final at the 2021 US Open. On her way to the final, Fernandez became the youngest player to defeat three top-five seeded players in the same Major since Serena Williams at the 1999 US Open.

The opponents she defeated on the way to reaching the final included previous US Open champions Naomi Osaka and Angelique Kerber.

Fernandez, who turned 19 during the tournament at Flushing Meadows, beat fifth seed Elina Svitolina in the quarter-finals before defeating second-seeded Aryna Sabalenka in the semi-finals, to set up a showdown with fellow teenager Emma Raducanu in the final. 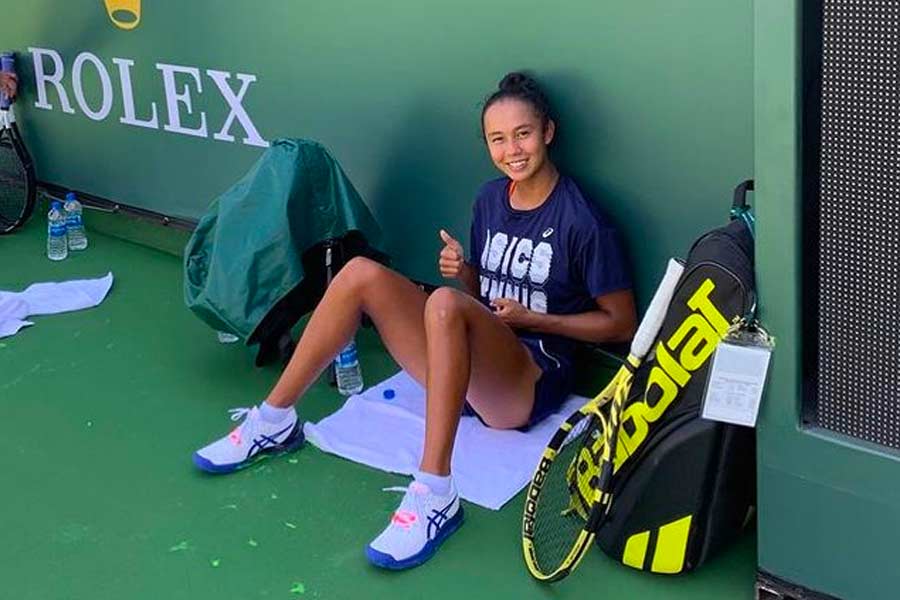 The match between Fernandez and Raducanu was the first all-teen final at the US Open since 1999.

Despite putting in an excellent performance in a thrilling match, Fernandez ended up losing in straight sets (6-4 6-3) to Britain’s Raducanu.

“I think this loss, I’m going to carry it for a very long time,” said Fernandez at her post-match news conference. “I think it will motivate me to do better in training, better for the next opportunity I get. I’m very happy with myself, with the way I competed, and the play I played, the way I acted on court the past two weeks. I’ve improved a lot not only tennis-wise but emotionally and mentally.” 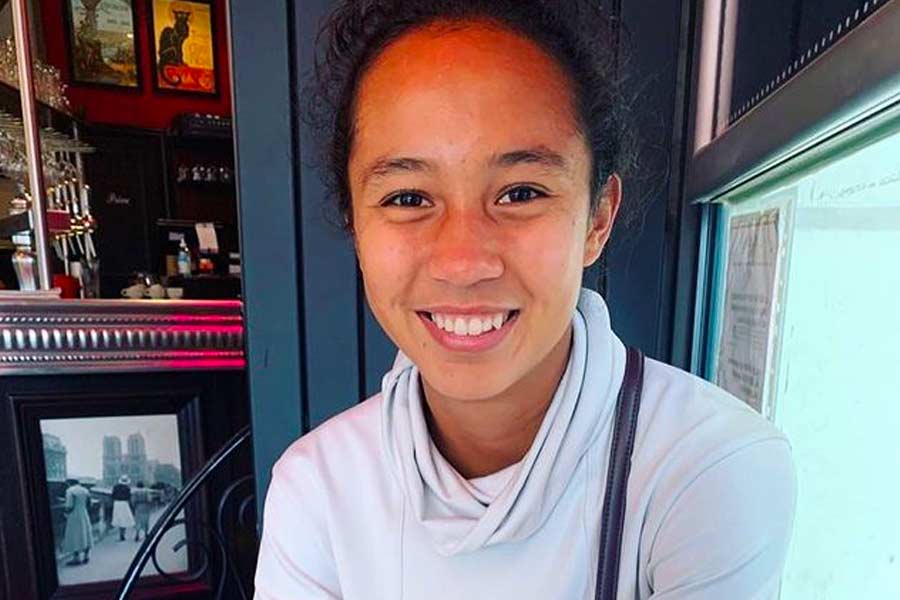 Asked what she learned about herself during the tournament, she replied: “One thing that really surprised me was that the more that I’m more outgoing on court and I try to get the crowd involved, the more I’m playing well. Usually when I was younger, I’d try to be as calm as possible, just like [Roger] Federer. I’m glad that I’ve discovered that of myself, that I play a lot better when I’m more outgoing and when I’m using the crowd to my advantage.”

Fernandez took home a prize money cheque of $1,250,000 as the runner-up in New York. Both Fernandez and Raducanu made their top-30 debuts after the tournament.

Leylah won the second WTA title of her career in March 2022 when she triumphed at the Monterrey Open in Mexico. She beat Colombia’s Camila Osorio 6-7(5) 6-4 7-6(3) to win the tournament for the second straight year.

Fernandez’s hobbies include taking dancing lessons – and she is currently learning Salsa with her younger sister.

She loves to solve puzzles and Rubik’s Cubes during match rain delays or in her free time at the hotel. 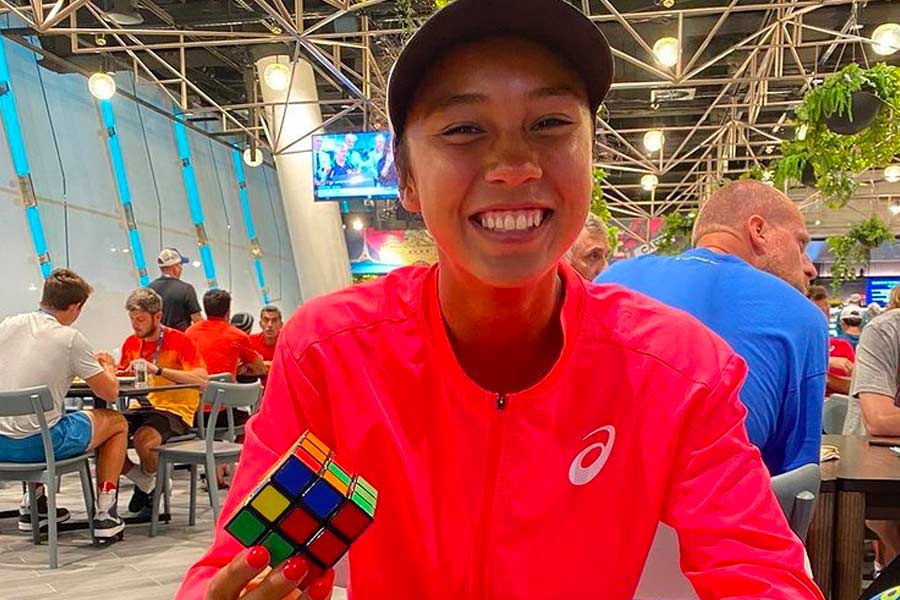 Fernandez revealed in an interview with CBS Sports that her father is not overly strict with her when it comes to her nutrition.

“He actually lets me eat what I want, which is pretty cool that he’s not too strict outside the court,” Leylah said. “The only thing he’s strict about is my schooling, like every parent is, other than that he just says balance your life, you have time to relax and hang out but when it’s time to work, you work. That’s all he wants for me, and to be independent.”

Fernandez has also revealed that she is a keen admirer of both Manchester City and Real Madrid football clubs.

“I love Real Madrid but right now we’re kind of taking a break from them and supporting Manchester City,” Fernandez said. “I like Pep Guardiola, his style is kind of like my tennis game so I’m learning from him.”

Emma Raducanu reserved praise for Fernandez’s game after the 2021 US Open final. She said: “From the very beginning I knew it was going to be an extremely difficult match because Leylah, she’s played some unbelievable tennis, taking out a lot of the top 10 this week. I knew that I’d really have to bring my game.

“I was just trying to focus as much as possible on one point at a time. There were some really great battles. I really had to dig deep to face quite a bit of adversity in both sets.” 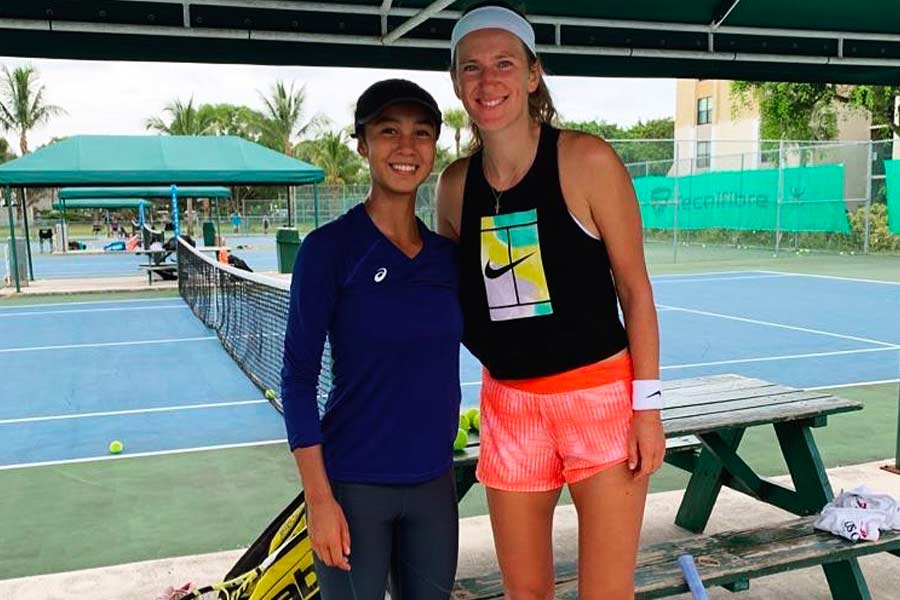 Former world number one Andy Roddick was quick to praise both players during the 2021 US Open final: “These two young women [Raducanu and Fernandez] are a gift to tennis. An absolute gift.”

Former world number one Billie Jean King also praised both of the players after the US Open final. She wrote on Twitter: “What a terrific display of competition and maturity from two exceptional players. It is wonderful to see this generation living our dream. I can’t remember a US Open with better crowd support. Thank you, NY, the greatest fans in the world.”