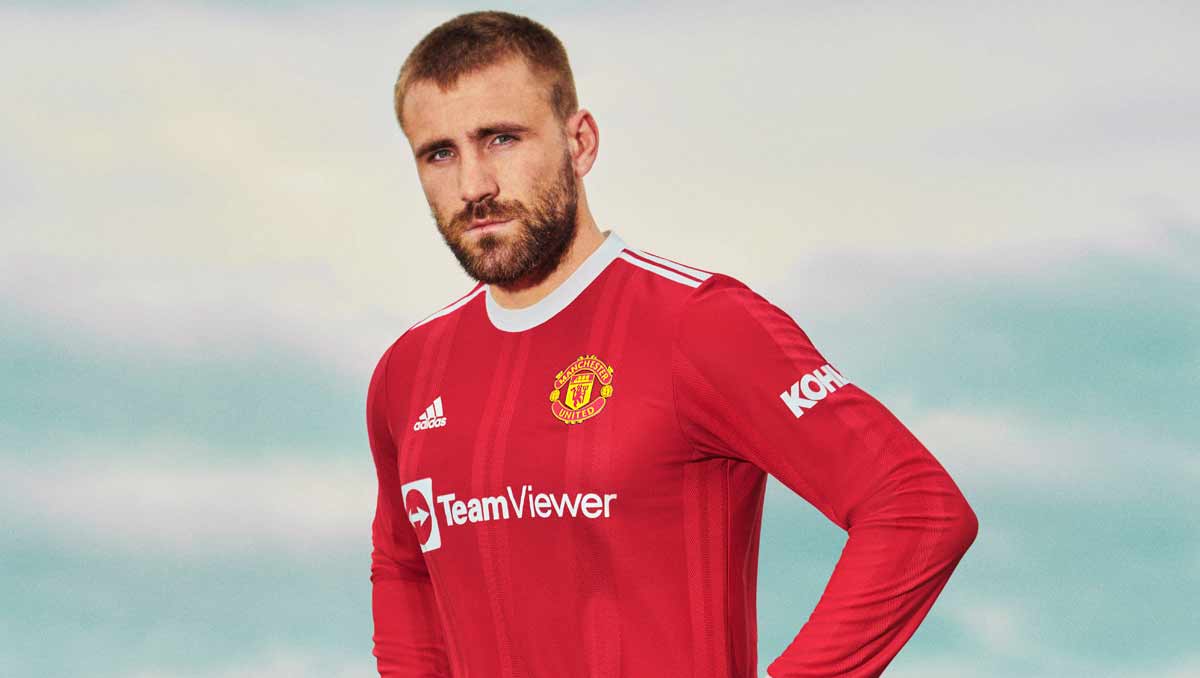 Luke Shaw is an English footballer who plays as a left-back for Manchester United.

The full-back started his professional career at Southampton and Shaw made his debut against Millwall at the age of 16.

Luke made his Premier League debut in 1-0 win against West Brom in November 2012.

After two seasons in the Southampton first team, Shaw completed a £27m move to Manchester United in 2015.

Luke then made his first Red Devils appearance in a 2-1 win over West Ham in August 2015.

Shaw made his senior England debut when he replaced Ashley Cole in a 1-0 win over Denmark at Wembley on 27 February 2014.

So, how much do you know about Shaw and his career? This is his story.

Luke was born in Kingston-Upon-Thames in London.

Shaw supported Chelsea FC during his childhood and naturally harboured a desire to represent his local team.

However, Luke wasn’t offered a place at their academy following some sessions at the club’s development camp.

Shaw moved to Southampton’s youth academy at the age of eight.

He was a regular in the Southampton Under-18 team at the age of 15.

Shaw was the subject of interest from Arsenal, Chelsea FC and Manchester United in 2012 January transfer window despite not making a first-team appearance for the Saints.

However, Southampton were keen to stress that Luke was not for sale given his huge potential.

Shaw made his first-team debut as a 77th-minute substitute in a 1-1 draw with Millwall in the FA Cup third round on 28 January 2012.

He was handed his first professional contract following Southampton’s promotion to the Premier League.

His first start for the Saints came in a 4-1 win over Stevenage in the League Cup first round on 28 August 2012.

Aged 17, Shaw made his Premier League debut when he came on as a substitute in a 2-0 loss at West Brom on 5 November 2012. Five days later, he became the youngest Southampton player to make a Premier League start when he featured in the 1-1 home draw with Swansea City.

He completed 90 minutes for the first time in Southampton’s 1-0 loss to Liverpool FC at Anfield on 1 December 2012.

Shaw created an assist for Jason Puncheon’s goal in a 2-2 draw with Chelsea in Nigel Adkins’ final game in charge of the Saints.

His successor Mauricio Pochettino managed to get the best out of the promising full-back.

Luke finished the season with one assist in 28 games in all competitions.

Shaw made an assist for Rickie Lambert’s winner in a 1-0 victory over West Brom at The Hawthorns in their opening Premier League game of the season on 17 August 2013.

He went on to impress in Southampton’s victories over Liverpool FC and Crystal Palace before a 1-1 stalemate at Manchester United.

Luke made his second assist in a 2-2 draw with Arsenal at St Mary’s in January 2014.

Shaw finished the season with two assists in 39 games in all competitions for the Saints. 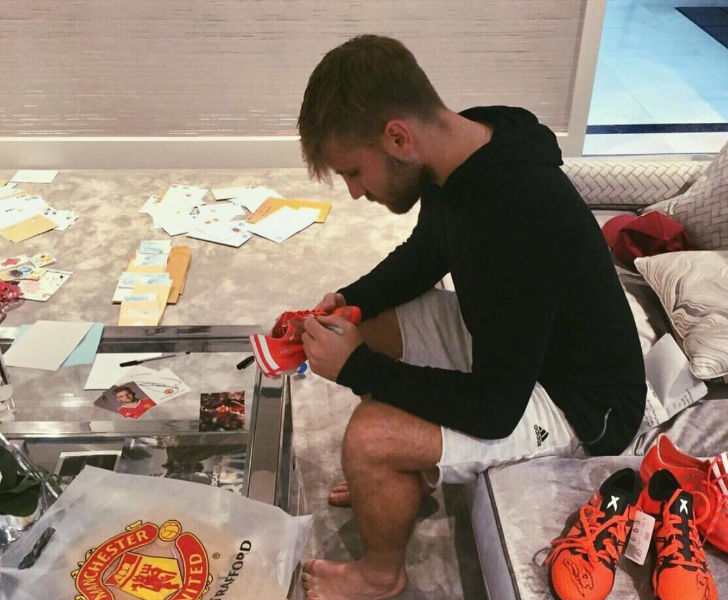 Manchester United won the race to sign Shaw in a £27m deal from Southampton on 27 June 2014.

Shaw put pen to paper on a five-year deal with the 20-time English champions despite reported interest from his boyhood club Chelsea FC.

The English full-back became the most-expensive teenager in the world following his move.

Van Gaal said of Luke: “He is OK, but I am always a trainer-coach who sees individuals and what they need. He needs to be fit and is not very fit and fit enough to do what I want. He needs to train individually until he is fit.”

Shaw made his Manchester United debut in a 2-1 win over West Ham United at Old Trafford on 27 September 2014.

Luke featured in a run of games before he missed a month of football in November due to injury.

He was sent off for the first time after a second bookable offence in a 1-1 draw with West Ham at Upton Park on 8 February 2015.

Shaw made five appearances in the final three months of his debut campaign at Manchester United.

Luke ended the season with 20 appearances in all competitions. 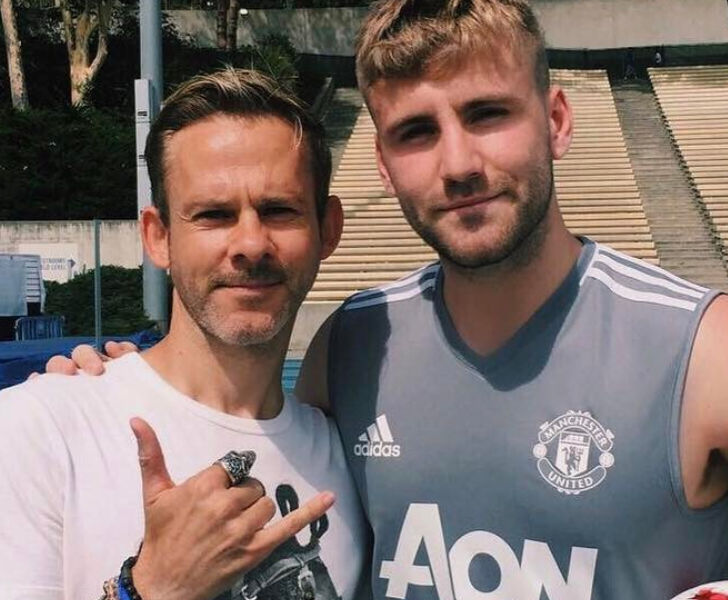 Shaw made an impressive start to the 2015-16 season. The England international looked noticeably fitter and sharper.

However, Luke’s form was curtailed when the Manchester United defender suffered a double fracture of his leg following Hector Moreno’s reckless challenge in their 2-1 loss to PSV Eindhoven in the Champions League on 15 September 2015.

Shaw had to receive oxygen and was looked after by nine medical staff during the nine-minute stoppage in Eindhoven.

Jose Mourinho replaced Van Gaal at Manchester United in May 2016.

Luke made his first appearance for the new manager in a 2-1 win against Leicester City in the Community Shield at Wembley on 7 August 2016.

Shaw started Manchester United’s opening three Premier League games in victories over Bournemouth, Southampton and Hull City. He was taken off during their next two top-flight fixtures before Luke was sidelined for a month.

Luke returned to make a late appearance in a goalless draw with Liverpool FC on 17 October 2016 before he started their 4-1 win against Fenerbahce in the Europa League days later. 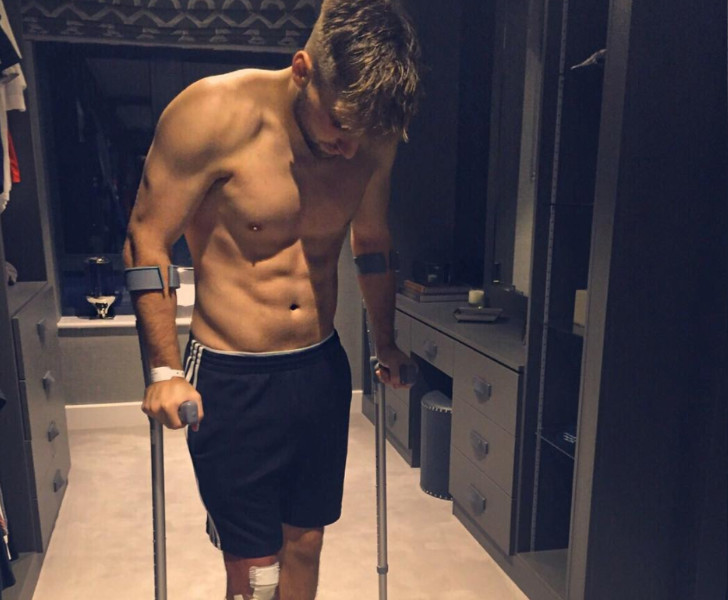 Shaw went on to start the club’s next three games in all competitions before he fell out of favour under Mourinho.

Indeed, Luke started three games between January and May to end the 2016-17 campaign in disappointing fashion.

Shaw made 19 appearances in all competitions as Manchester United won the Europa League and the League Cup.

Luke remained at Manchester United for the start of the 2017-18 season despite intense speculation surrounding his future.

Shaw made his first appearance of the season as a half-time substitute in a 4-1 win over Burton in the League Cup third round in 2017.

He had to wait until 5 December to make his first start of the campaign in a 2-1 win over CSKA Moscow in the Champions League.

Mourinho handed Shaw starts for the 1-0 win against Bournemouth in the Premier League and the 2-1 loss to Bristol City in the League Cup semi-finals.

Luke started five successive games in the Premier League during the festive period to suggest Shaw had turned a corner under Mourinho.

However, the left-back made just three starts following his last 90 minutes in the Premier League against Swansea on 15 January.

Shaw was linked with a potential summer move to FC Barcelona, Chelsea FC and Tottenham Hotspur.

However, speculation in June 2018 suggested Man United were prepared to offer Shaw a new deal. 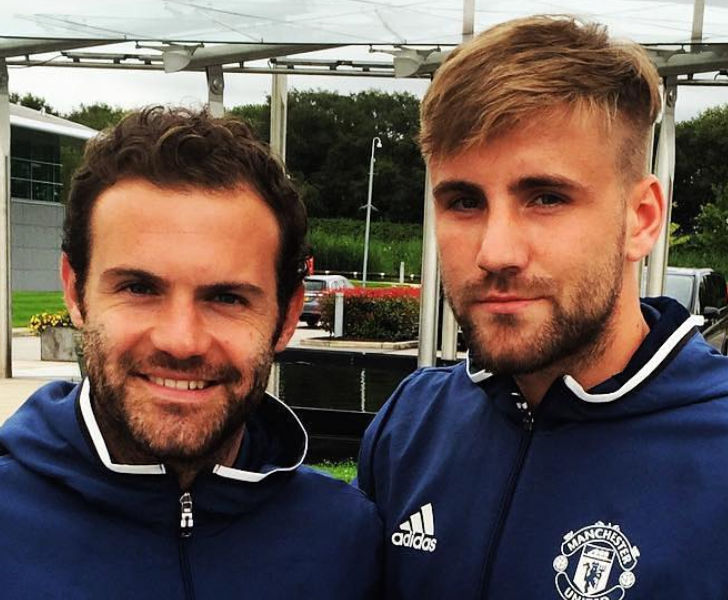 September 2016 after the 3-3 draw at West Brom: “Today for the second goal, (Nordin) Amrabat on the right side, our left-back (Shaw) is 25 metres distance from him, instead of five metres. But even at 25 metres, then you have to jump and go press. But no, we wait. This is a tactical but also a mental attitude. In a couple of weeks, everything like this becomes perfect. That’s my job.”

November 2016 before the trip to Arsenal: “Luke Shaw told me this morning that he was not in the condition to play so we had to build a defensive line. There is a difference between the brave, who want to be there at any cost, and the ones for whom a little pain can make a difference.”

February 2017 after Shaw missed the win over Watford: “He has to work and wait. Against Watford I wanted one defender on the bench and the defender is someone who can play in more than one position. Darmian can play left-back, right-back and an emergency central defender for us so my choice was Darmian.”

In January 2018, Shaw finally earned some praise from Mourinho: “Now with a good run of matches and continuity also, playing like he did against Everton, two days after a previous match, he’s good, solid, physically much better, mentally much stronger, tactically understanding the game much better and what we need in different phases and circumstances. I’m really happy and [looking at the transfer market], I can say that in this moment I don’t see many left-backs better than this Luke Shaw.”

Asked about his relationship with Mourinho back in June 2021, Shaw insisted he was “past it” and had moved on.

“I am trying to move on but, obviously, he can’t. He continuously talks about me, which I find quite strange. Even some of the lads have said: ‘what’s his problem?’ and ‘why does he keep talking?’ What he says now is nothing compared to how it used to be. I don’t think any of you realise the two or three years I had with him and how bad it was then, what it was like then. I am being totally honest.

“I am so past it now. I have grown up a lot. The three years I had with him, I learnt a lot. I find it easy to ignore him now and even laugh about it. But it’s better just to ignore it.

“Look, like I said, his job is to comment on what he feels is right. His voice is obviously very big. He likes to talk a lot about me, as everyone has seen recently. But his voice is his own. He can say what he wants. I will focus on myself.”

Shaw made his senior England debut when he replaced Chelsea FC legend Ashley Cole at half-time in a 1-0 victory over Denmark at Wembley on 27 February 2014.

The full-back scored one goal and made three assists in six games for England at Euro 2020 as they reached the final, where they ended up losing to Italy on penalties.

Shaw is in a relationship with long-term girlfriend Anouska Santos.

In November 2019, Santos confirmed the birth of the couple’s first child, a baby boy. 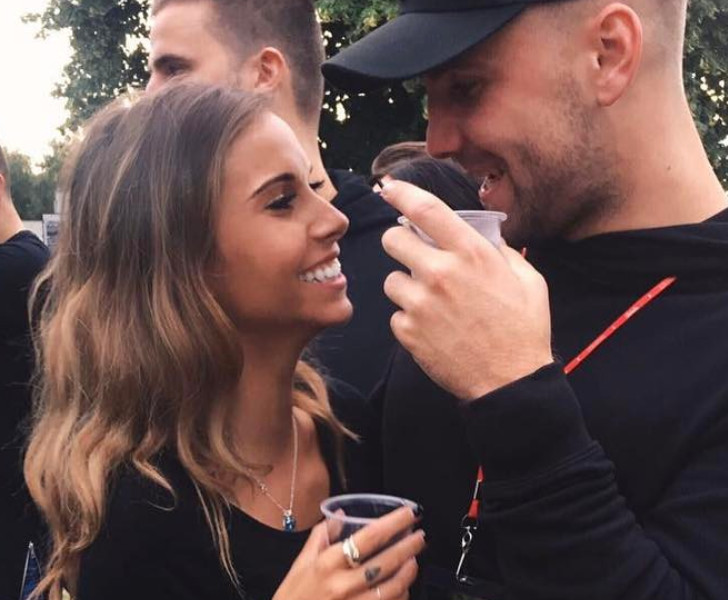 Luke Shaw – Did You Know?

• Luke has two major honours to his name: Community Shield and Europa League. He was also a runner-up with England at Euro 2020.