By The Sport Review
Updated on Tuesday 2 August 2022 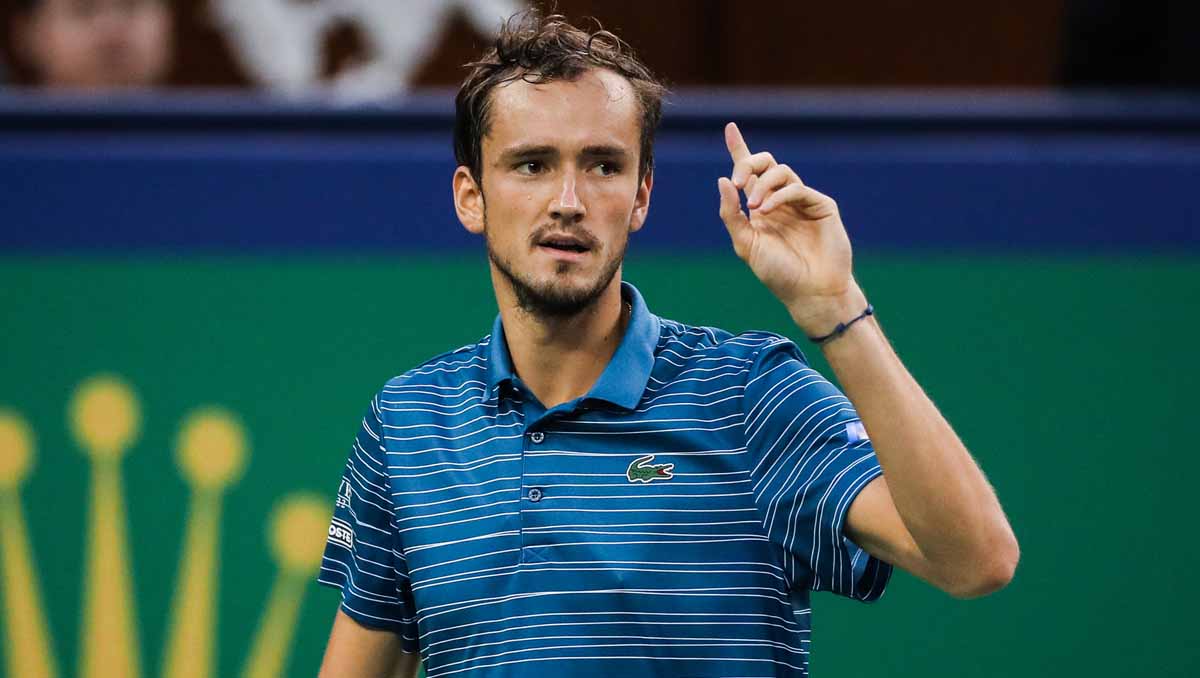 Daniil Medvedev is a Russian tennis player. He won his first grand slam title at the US Open in 2021.

The 26-year-old began playing tennis when he was around nine years old and was inspired by watching his fellow countryman Marat Safin win the 2005 Australian Open title.

After enjoying a solid junior career, Medvedev made his ATP main-draw debut in doubles at the 2015 Kremlin Cup and won his first ATP Tour level title three years later.

His first ATP title came at the 2018 Sydney International, where he defeated Australian Alex de Minaur in three sets.

He then reached the 2022 Australian Open final but lost to Rafael Nadal in five sets. His favourite shot is the return and his preferred surface is hard.

So, what do we know about Medvedev’s journey to becoming the talented tennis player he is today? This is his story.

Daniil Medvedev (full name: Daniil Sergeyevich Medvedev) was born on 11 February 1996 in Moscow, Russia, to parents Sergey Medvedev and Olga Medvedeva. He has two older sisters – Julia and Elena, who are 12 and eight years his senior respectively.

Medvedev’s father Sergey is a computer engineer who developed and run a building materials company in Russia.

Initially, his parents wanted him to take up swimming. But when they arrived at the pool when he was around nine years old, he saw an announcement for tennis lessons, and it was on the advice of his father that he enrolled.

He studied at a school which specialised in physics and mathematics before graduating early and enrolling in economics and commerce at the Moscow State Institute of International Relations.

Medvedev has explained that his mother was keen for him to focus on his studies when he was a teenager. “There was always a little bit of a fight between my father and my mother,” Medvedev said in an interview in March 2020. “My mother wanted me to study more, which is why I was in school while playing tennis until I was 18. 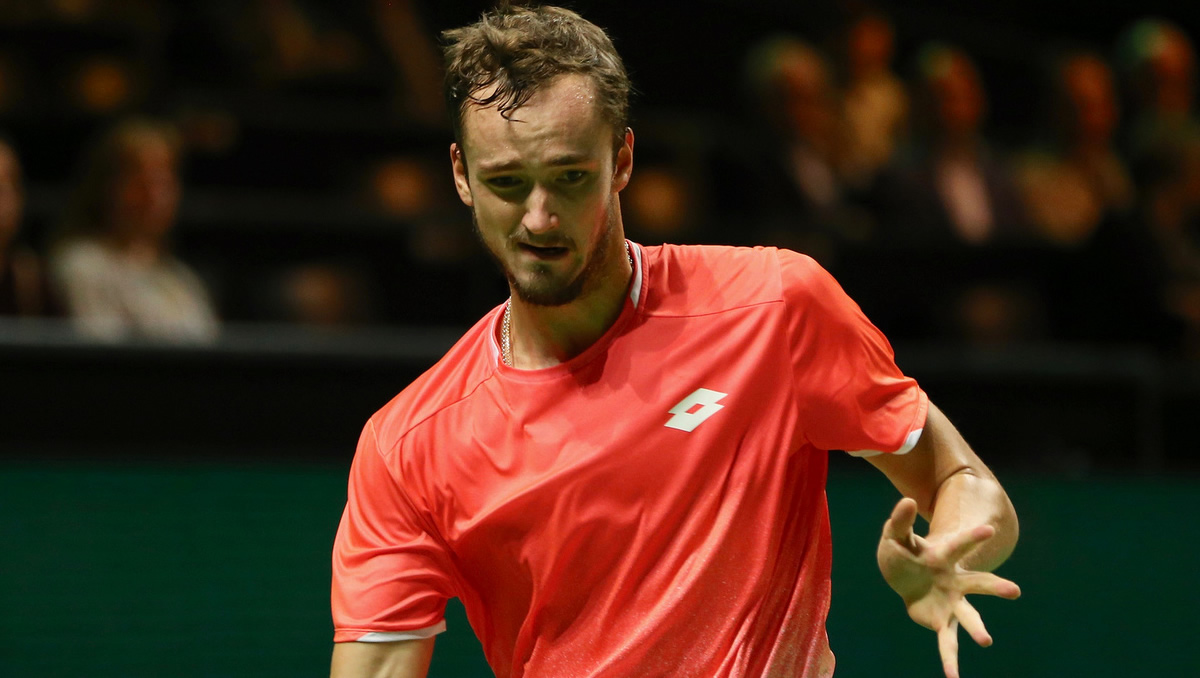 “In Russia, most professional athletes are done studying around 12 years old. It might have been the reason I wasn’t as good as my friends for some time, but I have no regrets. There were many tough times before the help from the federation and sponsors, when there wasn’t enough money. There were matches where I lost and all I was thinking about was the extra 100 dollars I could’ve made.”

Medvedev and his family settled in Antibes, France when he was 18 years old. He later joined the Elite Tennis Center run by Jean-Rene Lisnard (ex-world No.84), in Cannes.

Medvedev was a solid junior player and his top ranking came in January 2014, when he peaked at number 13 in the world.

In total, he won eight junior titles but did not taste grand slam success at junior level. His best results at the junior grand slams were when he reached the third rounds of the Australian Open in 2014, as well as the third round of the US Open in 2013.

“The toughest period for me was the switch from juniors to pros,” Medvedev said. “I ended at 13 in the world in junior tennis. I started to quickly understand, after playing futures, just how difficult it would be to get from 700 to 300 in the world.

“You needed to save as much money as possible while trying to win five or six futures as quickly as possible. At the time I was lost, didn’t know how to do that because there were so many other players trying to do the same [thing].”

Medvedev made his ATP Tour main-draw debut in doubles at the 2015 Kremlin Cup, partnering Aslan Karatsev in the doubles. His singles ATP main-draw debut came at the 2016 Nice Open, where he came through qualifying to reach the first round, losing to Argentina’s Guido Pella in three sets.

He reached his first ATP Tour final at the Chennai Open in India in January 2017. In the final, he lost to Roberto Bautista Agut of Spain in straight sets.

He then made his grand slam main-draw debut at the 2017 Australian Open but lost in the first round to Ernesto Escobedo of the United States.

Medvedev won his first ATP Tour title at the Sydney International in January 2018. He came through qualifying to reach the main draw and beat the likes of Philipp Kohlschreiber and Fabio Fognini to reach the final. In the final, he beat home favourite Alex De Minaur in three sets.

“It’s amazing,” Medvedev said after claiming the title. “I’m really happy. I mean, to make it through the qualies, there were so many circumstances. I wanted to go to Auckland, because my girlfriend had a visa to New Zealand, and not even one guy withdrew from Auckland… now I won here. So [it’s] just amazing.”

His second career title followed in August of that year, when he triumphed at the Winston-Salem Open. He beat the likes of Ryan Harrison and Taro Daniel to reach the final, where he overcame Steve Johnson of the USA in straight sets. 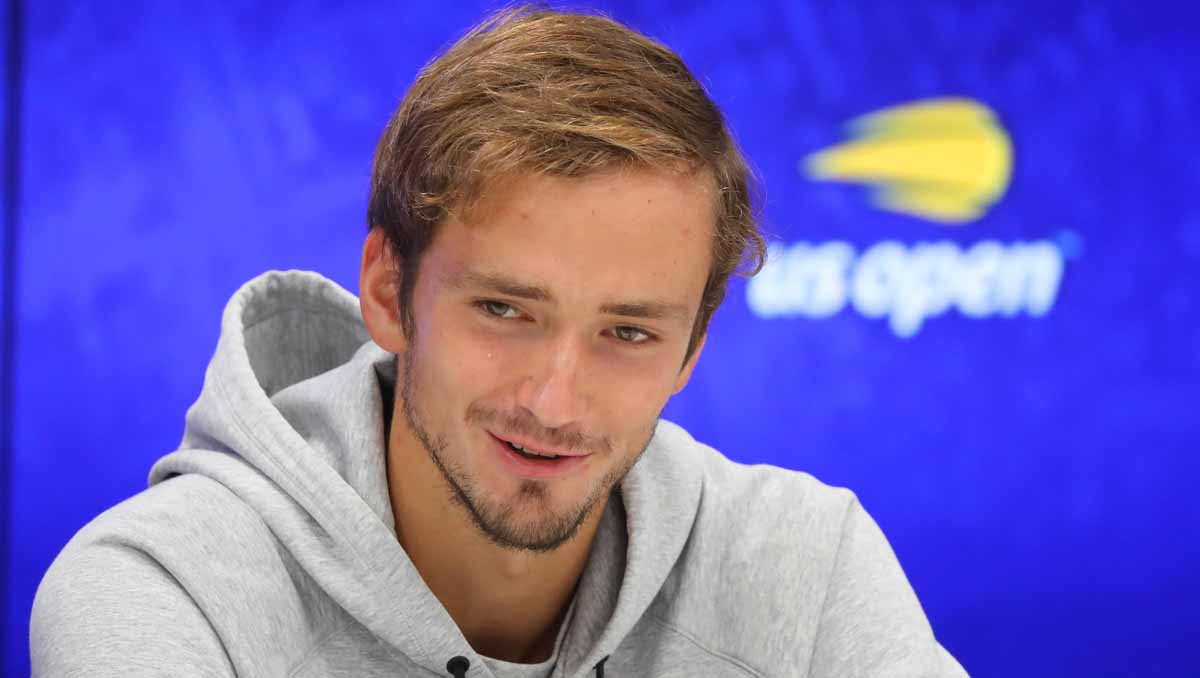 “In the beginning of the week, I didn’t think it was going to be possible,” said Medvedev, who was 22 at the time. “I was playing quite good, but I didn’t feel I was at the right form to win a title. I started quite slow in the tournament, I would say. I could have even lost my first match, and finally I won the tournament without dropping a set, which is quite an amazing achievement. I’m really happy about it.”

Four further titles followed in 2019, when he triumphed in Sofia, Cincinnati, Saint Petersburg and Shanghai. The triumphs at Cincinnati and Shanghai represented his first two ATP 1000 titles. He also reached the 2019 US Open final – the first grand slam final of his career – where he lost to Rafael Nadal in five sets.

In 2020, Daniil won the Paris Masters, before ending the season on a high by triumphing at the ATP World Tour Finals by beating Dominic Thiem 4-6 7-6 (2) 6-4 in the final.

“I always said before this tournament that it would be an amazing story if, here in London, where the tournament was for [12] years, that the first champion would be Russian and the last champion would be Russian, too,” Medvedev said during the trophy ceremony. “A lot of thanks to Nikolay Davydenko for being an inspiration for many kids [like] me [by] winning here. I hope to continue doing his job.” 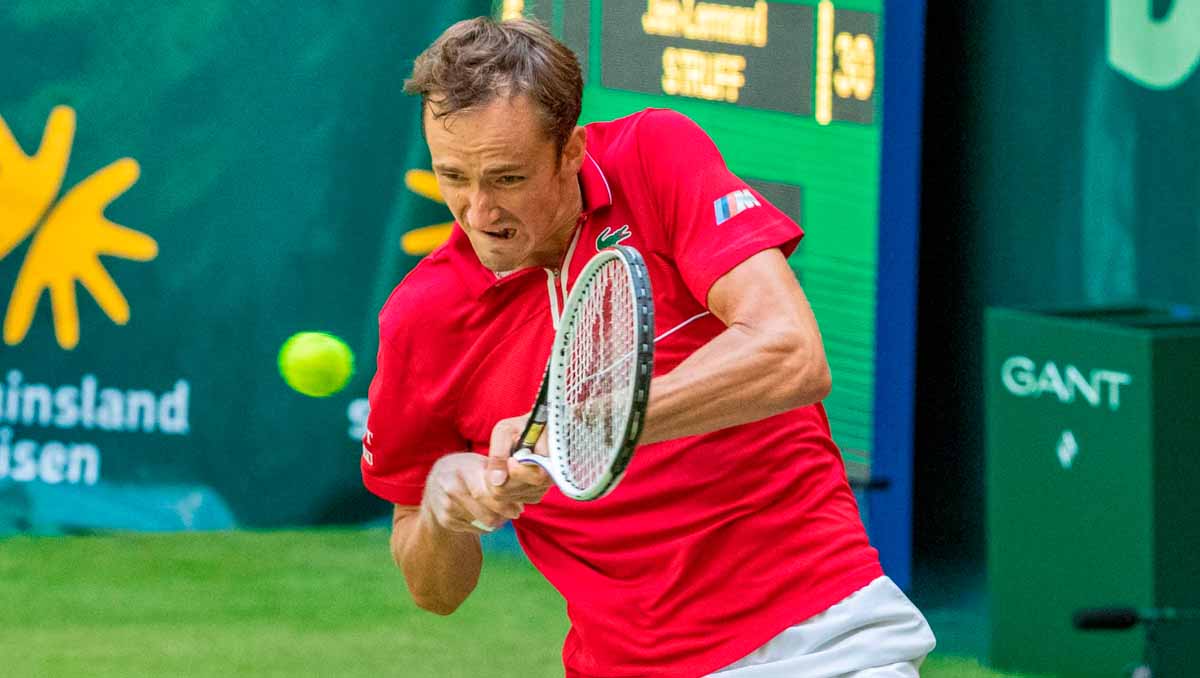 After reaching the Australian Open final in 2021 but losing to Novak Djokovic, Medvedev won his first grand slam title at the 2021 US Open, when he beat the Serb in straight sets, 6-4 6-4 6-4.

“You never know if you’re going to achieve [winning a major] in your career. I was always saying if I don’t, I just want to know that I did my best to do it,” Medvedev, who was 25 at the time said. “[I feel] a lot of happiness. That’s my first Grand Slam. I don’t know how I’m going to feel if I win a second one or third one. That’s my first one, so I’m really happy. Means a lot to me.”

Medvedev reached the Australian Open final for the second year running in 2022 but lost to Rafael Nadal in five sets. 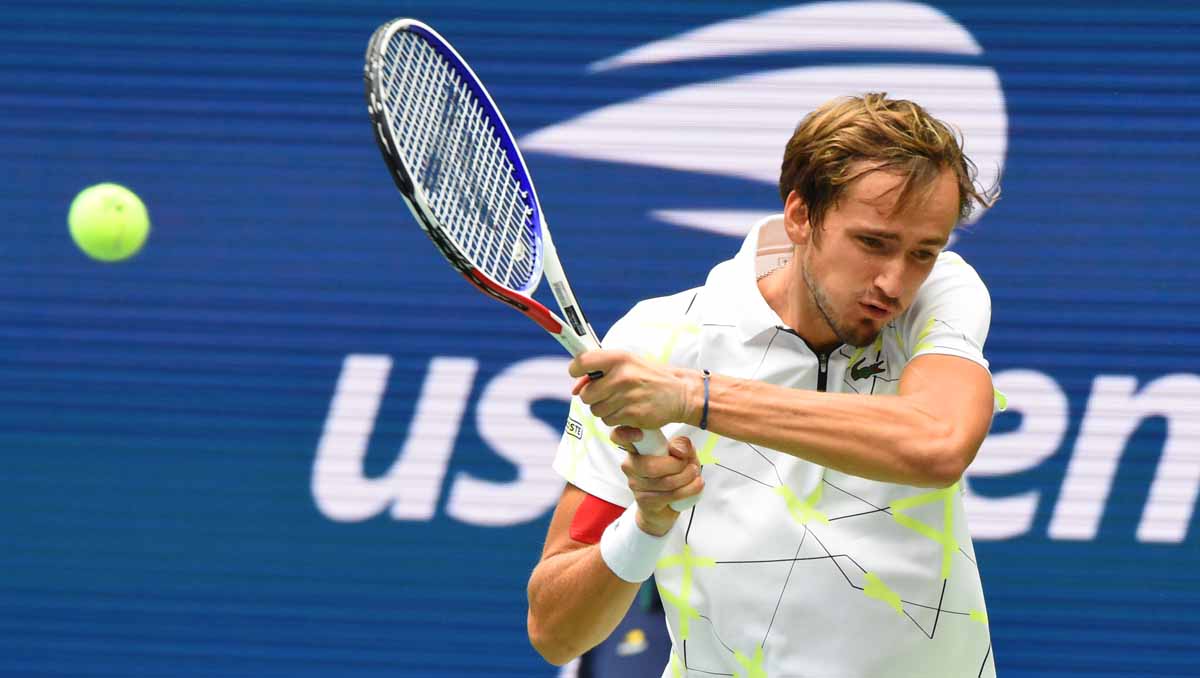 Prize Money, Net Worth And Earnings

As is the case with most sports stars, there is no official figure for Daniil Medvedev’s net worth. However, according to various websites, his net worth stood at between $16m and $20m in 2022.

Away from tennis, Medvedev enjoys reading, as well as playing chess and computer games. He is a supporter of German football team Bayern Munich.

Medvedev, who speaks Russian, English and French, married his wife, Daria, back in 2018. He has since revealed that tying the knot with his partner has helped his performances on the court. 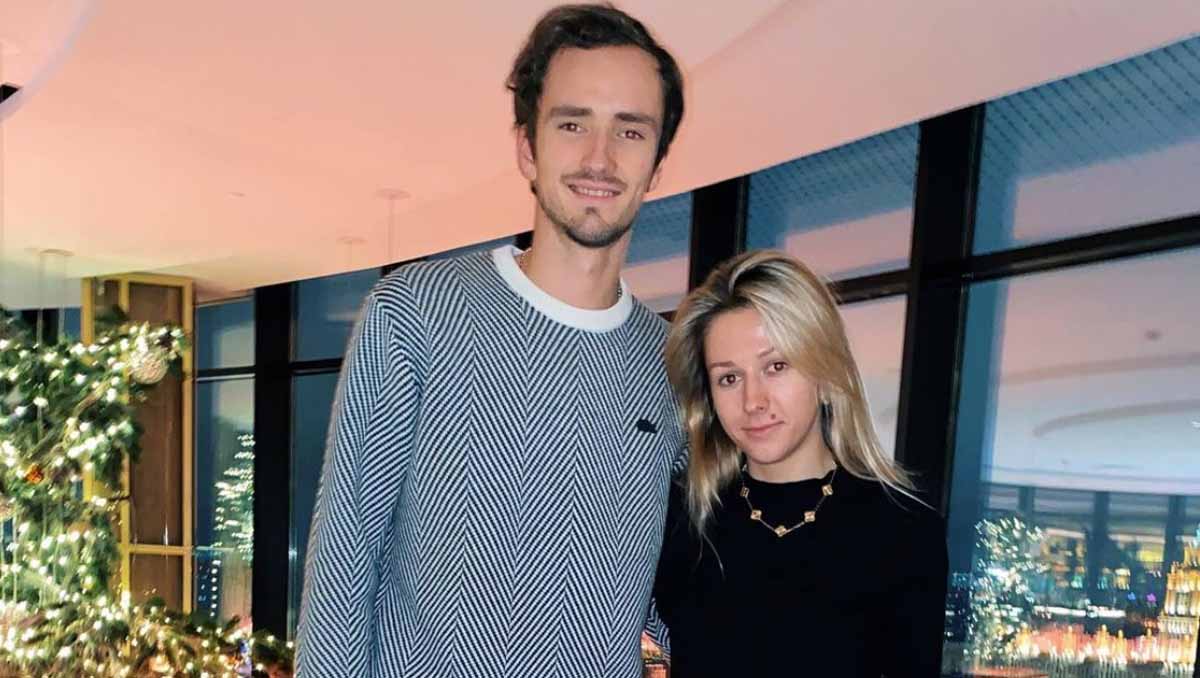 “She’s one of the most important members of my team,” Medvedev said of his wife. “She gave me a lot of confidence. I always say that it’s the moment I made the proposal to her, that’s when I started to go up. It was at this moment – it was after Wimbledon. I was, I think, 65 or something like this, and at the end of the year, I was already 15.”

Novak Djokovic, speaking after losing to Medvedev in the 2021 US Open final: “He came out very determined on the court. You could feel that he was just at highest of his abilities in every shot. He had a lot of clarity what he needs to do tactically. He has executed it perfectly.”

Dominic Thiem, speaking after losing to Medvedev in the 2020 ATP World Tour Finals final: “Your name is already in the history books. Of course I’m disappointed but I’m also proud of my performance. Daniil really deserved it, a great match and an amazing year. I hope we will have many great matches to come.”