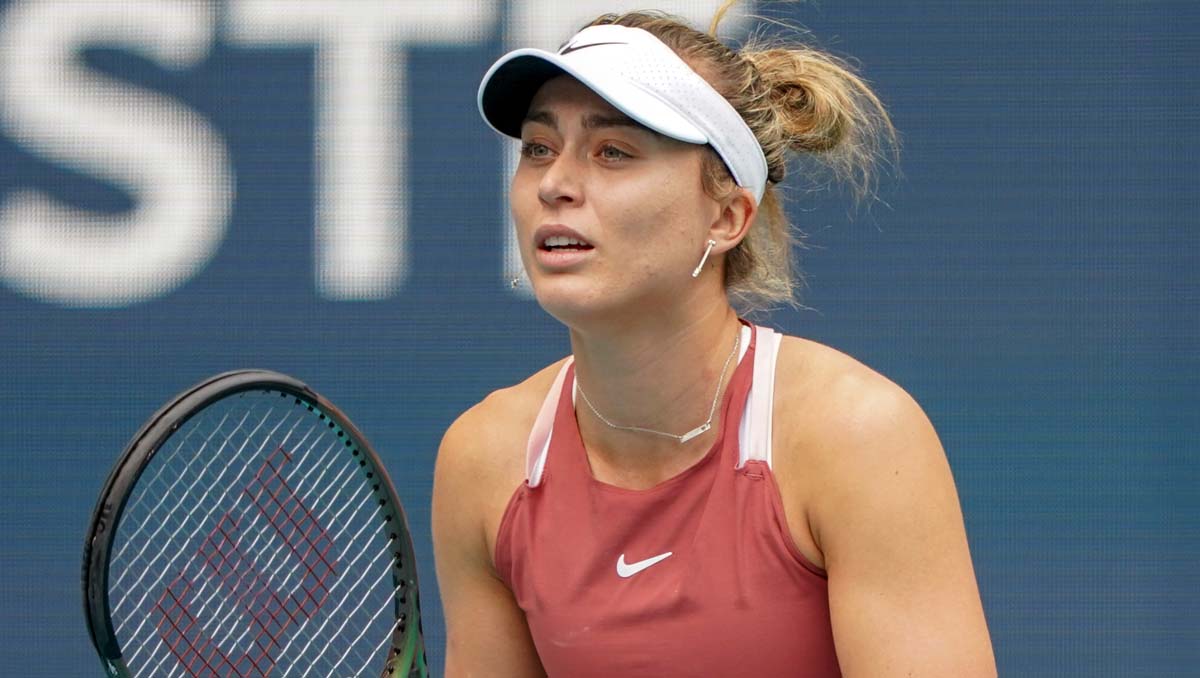 Paula Badosa is a Spanish tennis player. She won her maiden WTA singles title at the Serbia Open in Belgrade in May 2021.

She was born in Manhattan, New York, and began playing tennis at the age of seven after her family returned to Spain.

A big fan of Maria Sharapova, Badosa quickly fell in love with the sport and in 2015, she won the Girls’ Singles title at the French Open. She reached as high as number eight in the world in the junior rankings.

She impressed during a breakthrough year on the WTA Tour in 2018 and has enjoyed a steady rise up the rankings since then, winning her first WTA singles title in May 2021 after making her Grand Slam main draw debut at the Australian Open in 2019. In October 2021, she won her first WTA 1000 title at Indian Wells.

But how much do you know about Paula’s journey to becoming the talented professional tennis player she is today? This is her story.

Badosa was born on 15 November 1997 in Manhattan, New York, to Spanish parents Mireia Gibert and Josep Badosa. Her parents both worked in fashion and moved to New York in their younger years in order to progress their professional careers.

Interestingly, Badosa didn’t play much sport until her and her family moved back to Barcelona, Spain when she was seven years old. It was then that her parents signed her up for a tennis and swimming summer camp.

“I was born in the USA because my parents spent a long time working there and I just happened to be born there,” she explains. “I lived there until I was seven. I don’t remember that much about it – I remember when I first started school but not much else because I started to play tennis when I arrived in Spain.” 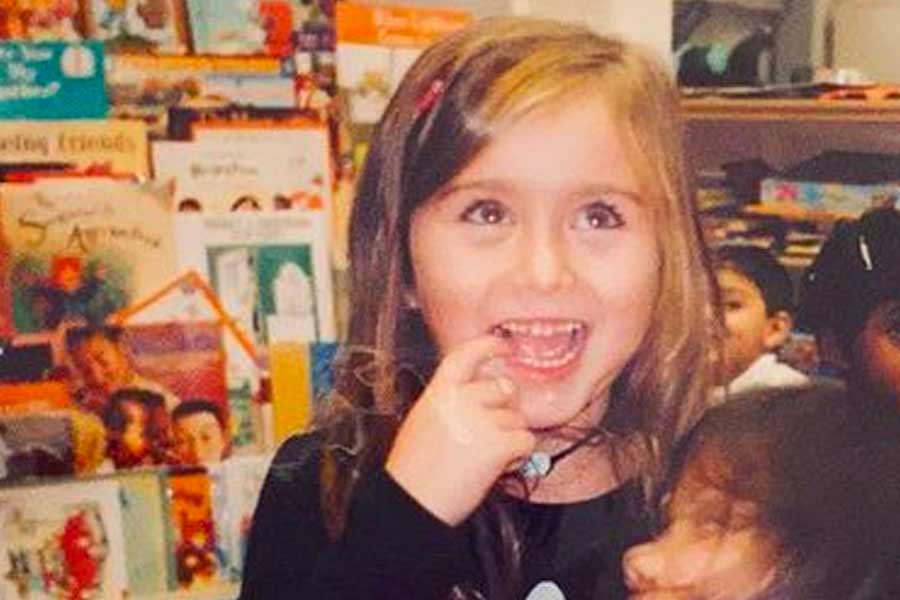 She quickly fell in love with playing tennis. “I remember it very much because on the first day, I went there, and I kind of fell in love with tennis,” Badosa said in an interview with visibilitas.com in 2018. “The camp finished and in September I was already asking my parents to sign me up for tennis lessons.

“I wanted to go more and more every day, it was like an obsession. And when it rained and training wasn’t possible, I would cry… I needed to play, even if it was against the house wall, which my parents obviously didn’t find very amusing at the time. It hooked me a lot.”

She initially started playing tennis in Playa D’Aro. When she was 14 years old, she made the difficult decision to leave home and move to Valencia in order to work on her tennis. Badosa eventually returned to Barcelona when she was 17 years old.

“When I moved to Valencia I did it because there was a good group with a high level, and I wanted to start being or feel like a tennis player,” she said. “Being away from home and from my family was hard.

“I had to learn to get by and start to mature, but it was what I wanted and I was willing. I learned to be alone, to be stronger, and I appreciate those years very much.” 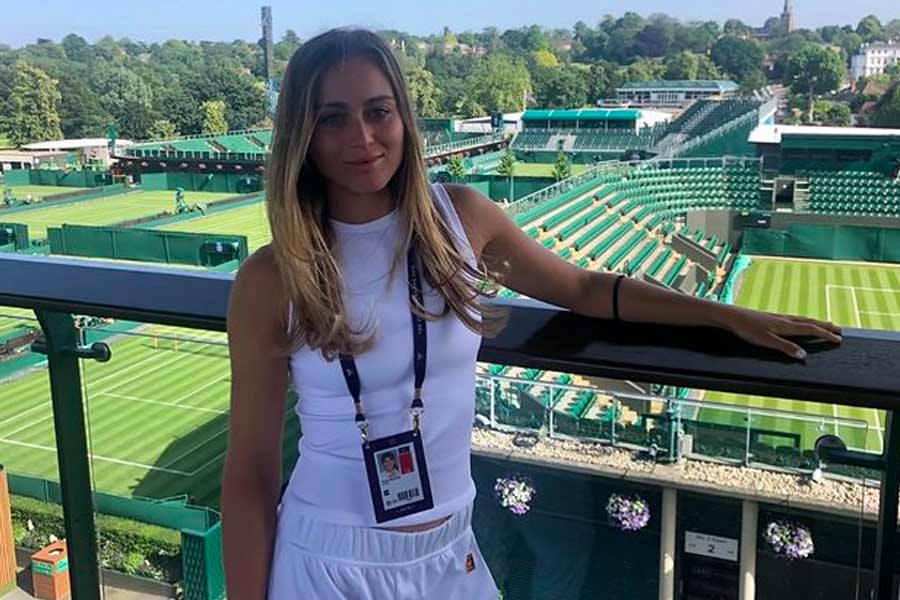 “In Spain, I remember being a junior and everyone expected me to be top 10 by the next year,” Badosa told wtatennis.com in 2019. “I felt so much stress and anxiety, like I had to win every match I played. It was very complicated for me.”

Badosa, who is an aggressive baseliner whose favourite shot is her serve, enjoyed something of a breakthrough as she recorded her first two wins on the WTA Tour at the Premier Mandatory Miami Open in March 2015, losing to number 14 seed Karolina Pliskova in the third round.

Later that year, she also reached the opening round of the Madrid Open through qualifying, but had to retire in her first-round match against Sara Errani. 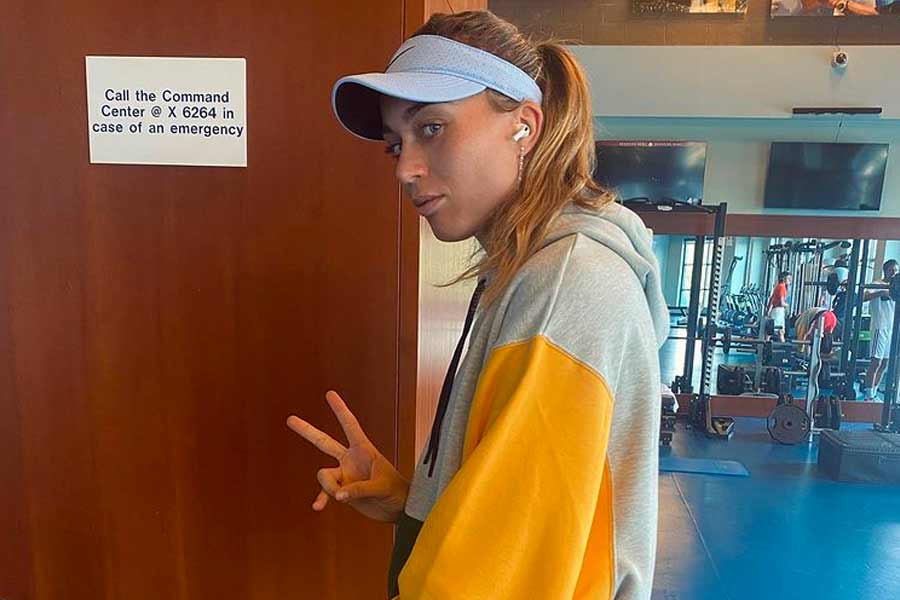 At the 2018 Morocco Open, she reached the quarter-finals, where she lost to Aleksandra Krunic. In September of that year, she won the $60,000 Open de Valencia, beatin fellow Spaniard Aliona Bolsova in the final.

She made her Grand Slam main draw debut at the Australian Open in 2019, reaching the first round through qualifying, where she lost to Australia’s Kimberly Birrell. She also reached the first round of Wimbledon and the US Open that same year. 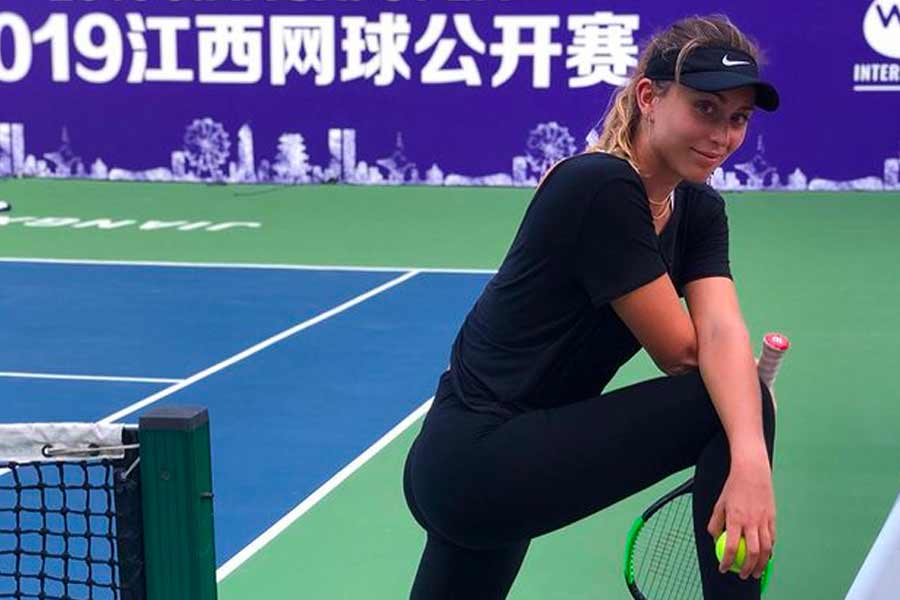 Badosa reached the second round of the Australian Open in January 2020. She beat Sweden’s Johanna Larsson in straight sets in the first round, before losing to Petra Kvitova in round two.

She then built on that progress when she reached the fourth round of the 2020 French Open, held in the autumn as a result of the coronavirus pandemic. Badosa beat Kateryna Kozlova, Sloane Stephens and Jelena Ostapenko before falling to Laura Siegemund of Germany in the fourth round.

In April 2021, Badosa beat Belinda Bencic and Ash Barty, at the Charleston Open as she made her way to the semi-finals, where she lost to the eventual champion Veronika Kudermetova. 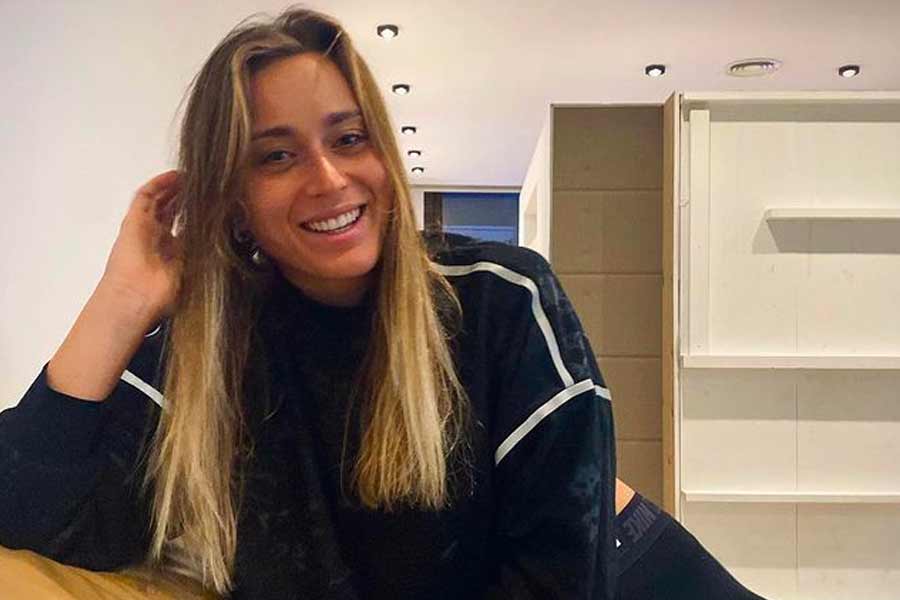 Badosa won her maiden WTA Singles title at the Serbia Open in Belgrade in May 2021. She won the final 6-2 2-0 after her opponent Ana Konjuh had to retire due to injury.

“I’m really, really happy I could win my first WTA title,” she said after her title win. “I’ve been chasing this since a long time, so finally I have it here with me. I’m super happy, and I’m super proud of myself. All this week, I think I played at a very good level and I was feeling quite well.” 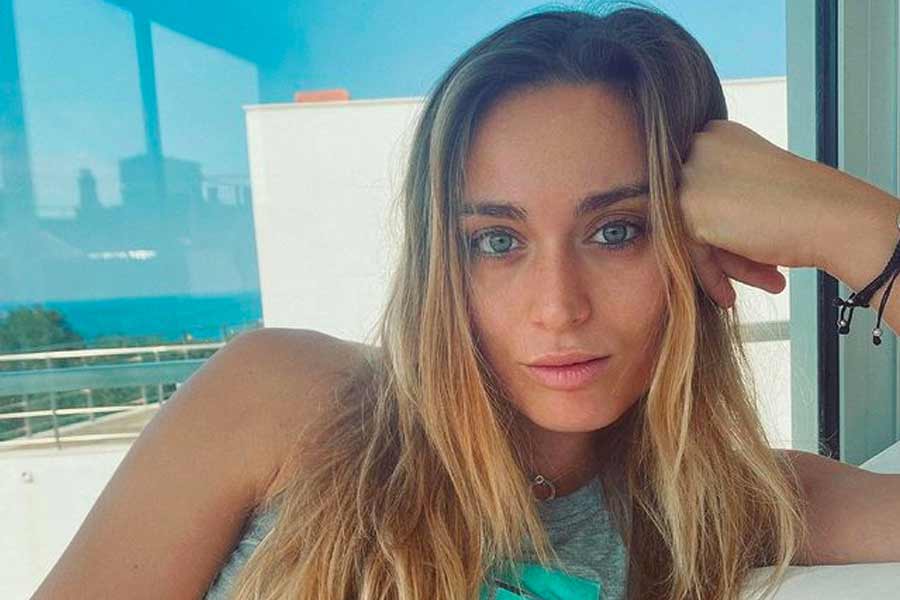 As a result of her impressive run in Belgrade, Badosa broke into the world’s top 40 for the first time.

Badosa then continued her good form at the French Open, when she reached the quarter-finals in Paris in June 2020. She lost in three sets to Slovenia’s Tamara Zidansek in the last eight.

She reached the second round of the 2021 US Open, where she lost to Russia’s Vavara Gracheva in straight sets, 6-4 6-4. 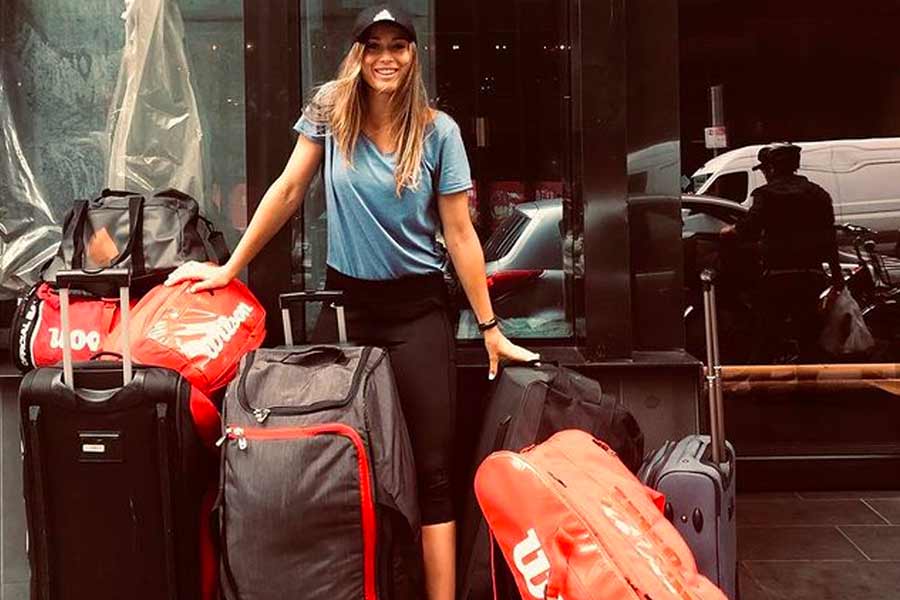 In October 2021, Badosa won her second career title and first WTA 1000 crown at Indian Wells. She triumphed in a thrilling final against two-times champion Victoria Azarenka 7-6 (7-5) 2-6 7-6 (7-2) in three hours and four minutes.

Posting on Instagram after claiming the title, she wrote: “Today I fulfilled one of my dreams, playing the finals in one of the biggest events in the world against a legend of our sport. And I won. You can’t imagine how many times I dreamed of this. This dream kept me alive, kept me strong to fight every day. There is nothing more powerful than this.
⠀
“Never stop dreaming, no dream is too big. Many thanks to all of you who support me, I feel very lucky for sharing this journey with all of you.” 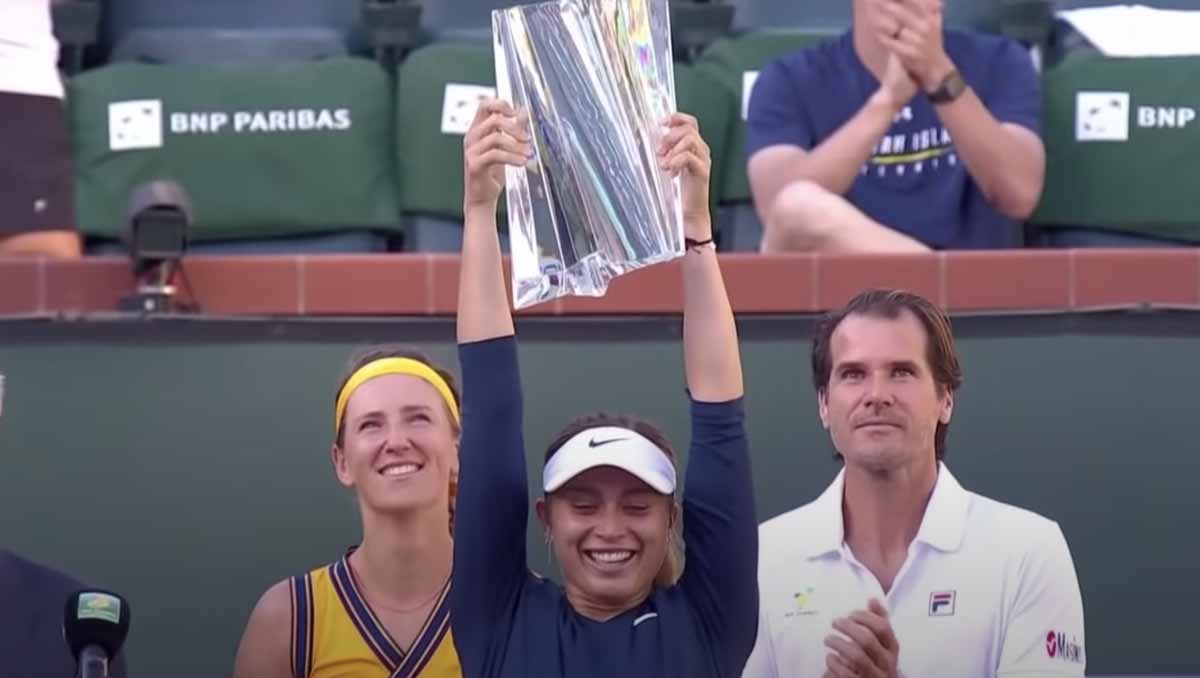 Badosa’s run to the Indian Wells title helped her to seal a spot at the 2021 WTA Finals in Guadalajara.

In the semi-finals, she faced fellow Spaniard Garbine Muguruza. Muguruza ended up being too strong for Badosa as she triumphed 6-3 6-3 to reach the final.

Badosa started 2022 in positive fashion, winning her third career WTA singles title at the Sydney Tennis Classic final in the lead-up to the Australian Open. She triumphed over Barbora Krejcikova 6-3 4-6 7-6(4) in a thrilling final. 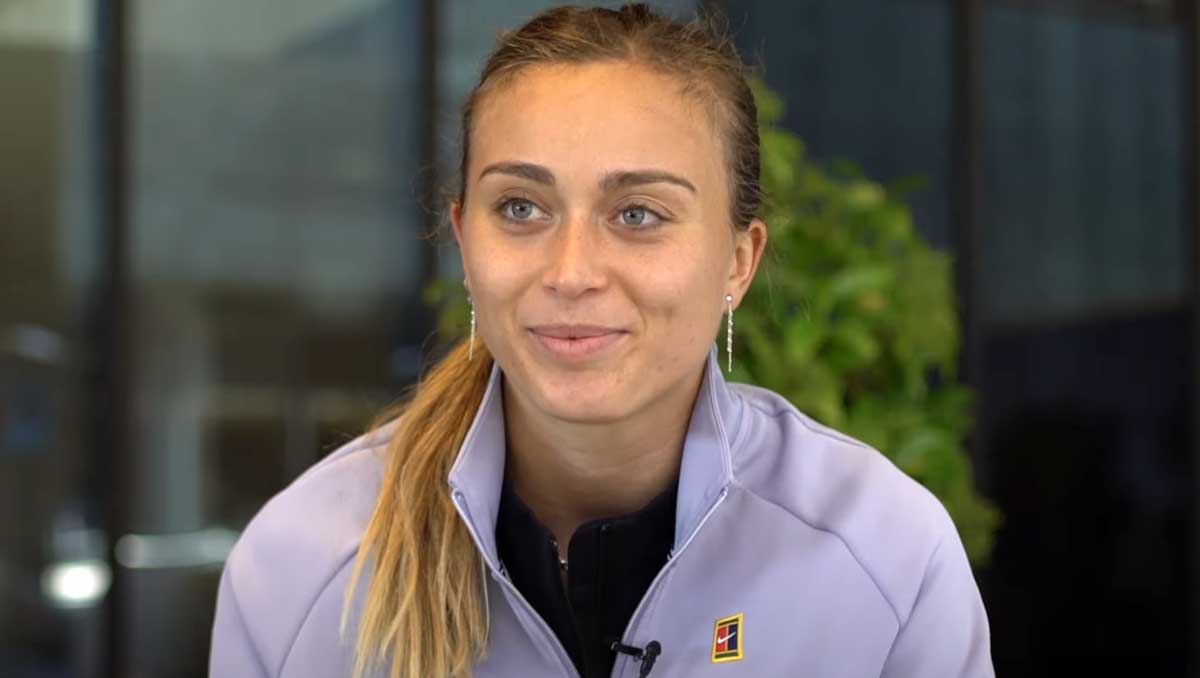 Badosa speaks English, Spanish and Catalan fluently, and says she would like to learn more languages.

She enjoys reading and always travels with books. Her favorite is Tuesdays with Morrie by Mitch Albom. Her best friend on the WTA Tour is fellow Spaniard Sara Sorribes.

She also holds a strong interest in fashion after her parents worked in the industry. “I love fashion, I’ve always really liked it,” she says.

“When it comes to designers, I keep things pretty simple. I don’t like to get too inventive, but yes, I have a favourite designer – I like Armani a lot. Luckily for me, my parents worked with them and I was able to meet him. So he’s probably my favourite.” 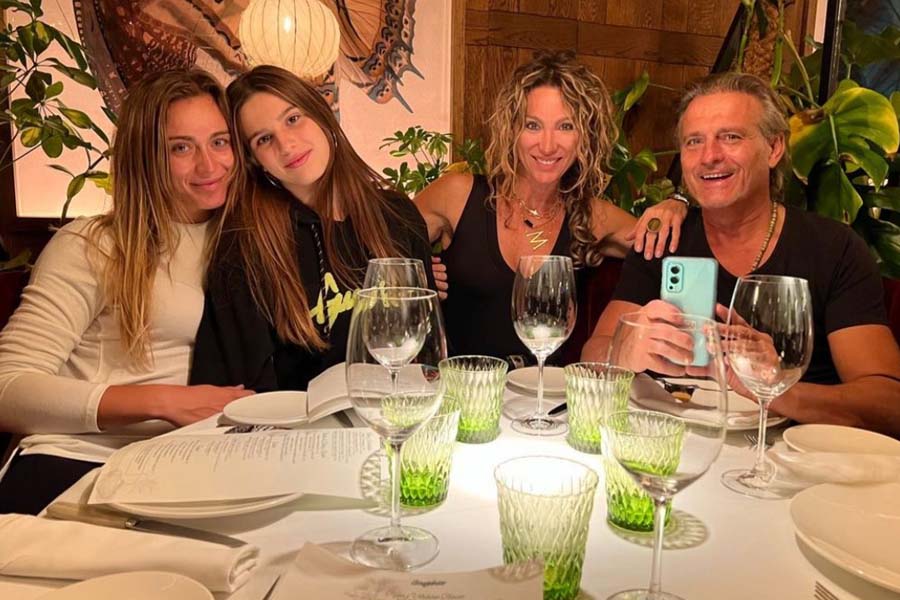 Paula Badosa with her parents and sister in 2021 (Photo: @paulabadosa / Instagram)

Meanwhile, Badosa has made no secret of the fact that her childhood idol was five-times Grand Slam champion Maria Sharapova.

Asked about the comparisons to Sharapova earlier in her career, Badosa said in 2021: “I took it in my stride. Maybe at the time when I was younger, I found it harder because of the pressure and expectations that come with comparing yourself to a great player.” 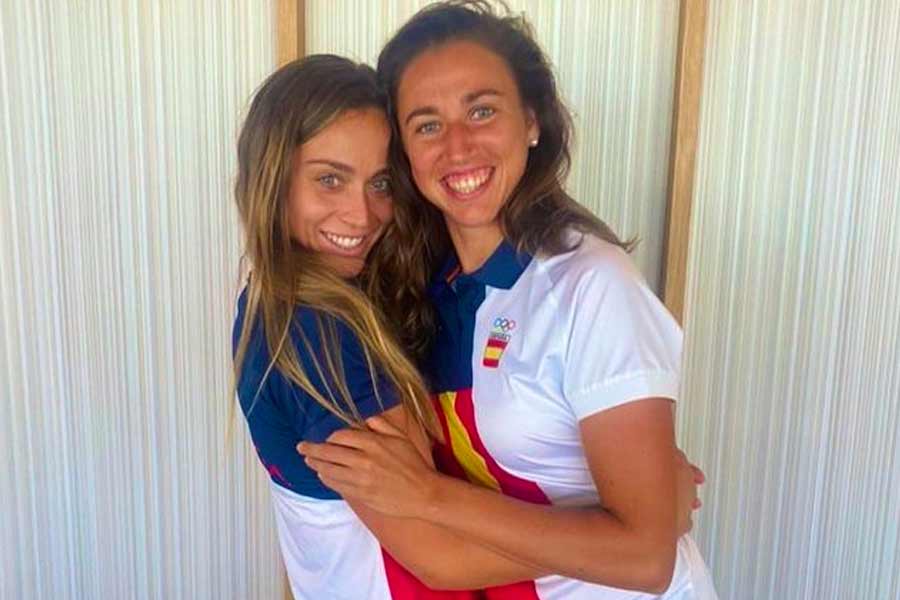 Badosa has also been open about some of her struggles with anxiety and depression during her career.

“There was one moment when I felt this big shock, this realisation that I could become a professional, I could achieve my dreams, but it came with this fear that I couldn’t explain,” she said. “I didn’t know what was happening to me or why it came over me, but for two months I struggled to compete. I was going through a hard time off of the court, and on the court it was really, really bad.”

“I had zero desire to do anything, personally or professionally. You lose the will to do a lot of things, and I especially lost the will to play tennis. I didn’t enjoy anything when I went to play. It was the opposite: I felt pressure, obligation, and all these fears that I didn’t even want to step on a tennis court, I didn’t want to compete.” 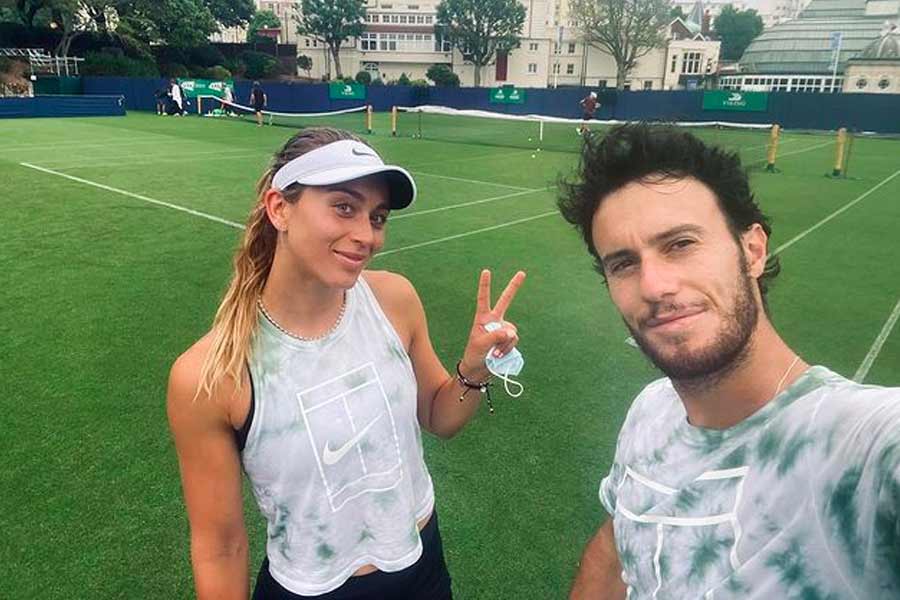 Jorge Garcia on Badosa after being named as her new coach in September 2021: “I worked with her when she came to Valencia when she was 14 years old until she was almost 18, at which point I left with Sara Sorribes.

“Now she is a professional. Train like a pro, think like a pro, tennis is her lifestyle. It’s like a little machine, everything works perfectly. Paula has not stopped growing since the [2021] season began, now she has just reached the top 30, what you must not lose is calm and patience. We must continue working in this same line and it will surely continue to reap more fruits.”