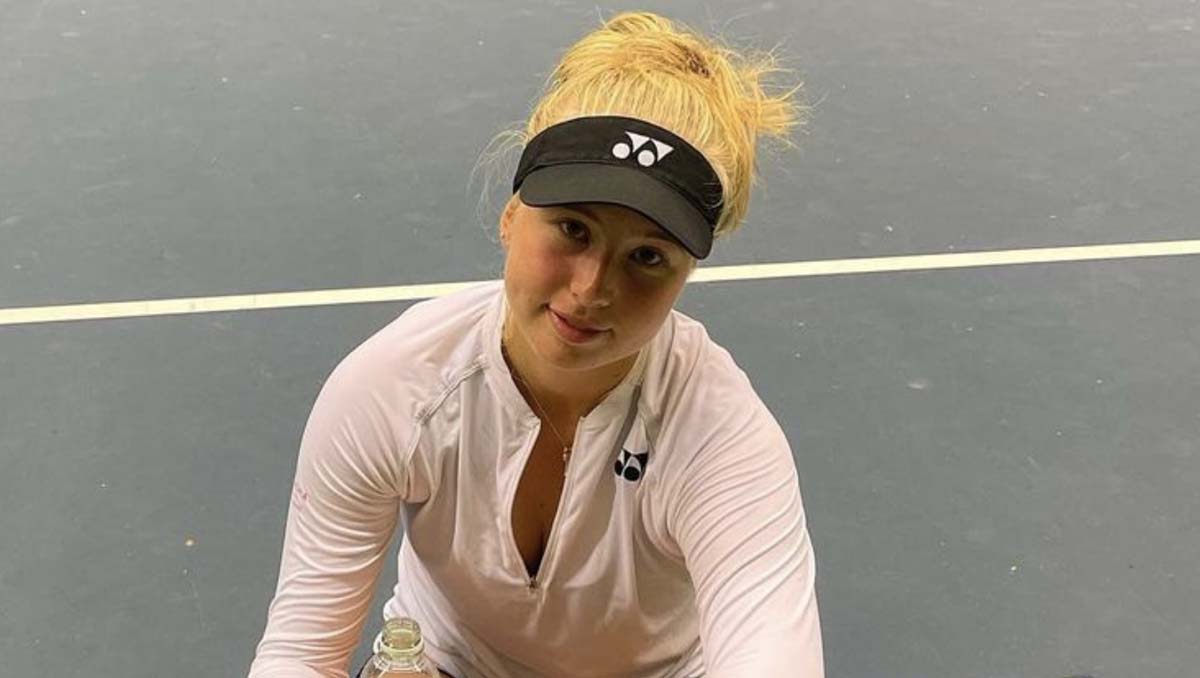 Clara Tauson is a Danish tennis player. She won her first WTA Tour title in 2021 at the Lyon Open in France.

Clara started hitting tennis balls when she was six years old and showed plenty of promise from an early age.

In 2013, she made her debut on the Tennis Europe Junior Tour when she was just 10 years old.

She continued to improve and picked up her first WTA points in 2017 after having made her debut on the ITF Women’s World Tennis Tour.

Tauson continued her impressive development in 2019, when she won the Australian Open girls’ singles title and claimed the number one ranking on the junior tour.

So, how much do you know about Clara’s journey to becoming the talented tennis player she is today? This is her story.

Clara Tauson was born on 21 December 2002 in Copenhagen, Denmark.

It’s fair to say that Tauson comes from a sporting family. Tauson’s father, Soren, was a professional hockey player, and her mother was an elite handball player. Soren Tauson stopped playing hockey professionally before Clara was born. Meanwhile, Tauson’s uncle, Michael, was a former ATP world No 101 who had a 27-26 record on tour.

Clara started playing tennis when she was just six years old and showed promise early on. When she was 10 years old, she left her local school to move to one that would allow her to focus on her tennis.

Tauson has revealed that she focused entirely on tennis as a youngster rather than trying out any other sports.

“Tennis is the only sport I’ve ever played,” said Tauson in 2021. “People are actually surprised when I say that, because kids always play a lot of sports, but I’ve only ever played tennis.

“My uncle, Michael Tauson, is a former ATP player, so everybody in the family has tried tennis, it’s been going on for generations. He was the world number 101 – the worst ranking!”

Tauson made her debut on the ITA Junior circuit in February 2016 when she was 13 years old. That year, she reached five finals, winning one.

In August 2016, she won the Danish Tennis Championship, beating Hannah Viller Moller in the final. In doing so, she became the youngest player to win the title, surpassing Caroline Wozniacki, who had won it aged 14.

Tauson made her junior Grand Slam debut at the US Open in September 2017, but did not make it through to the main draw. Later that month, she made her professional debut on the ITF Circuit. 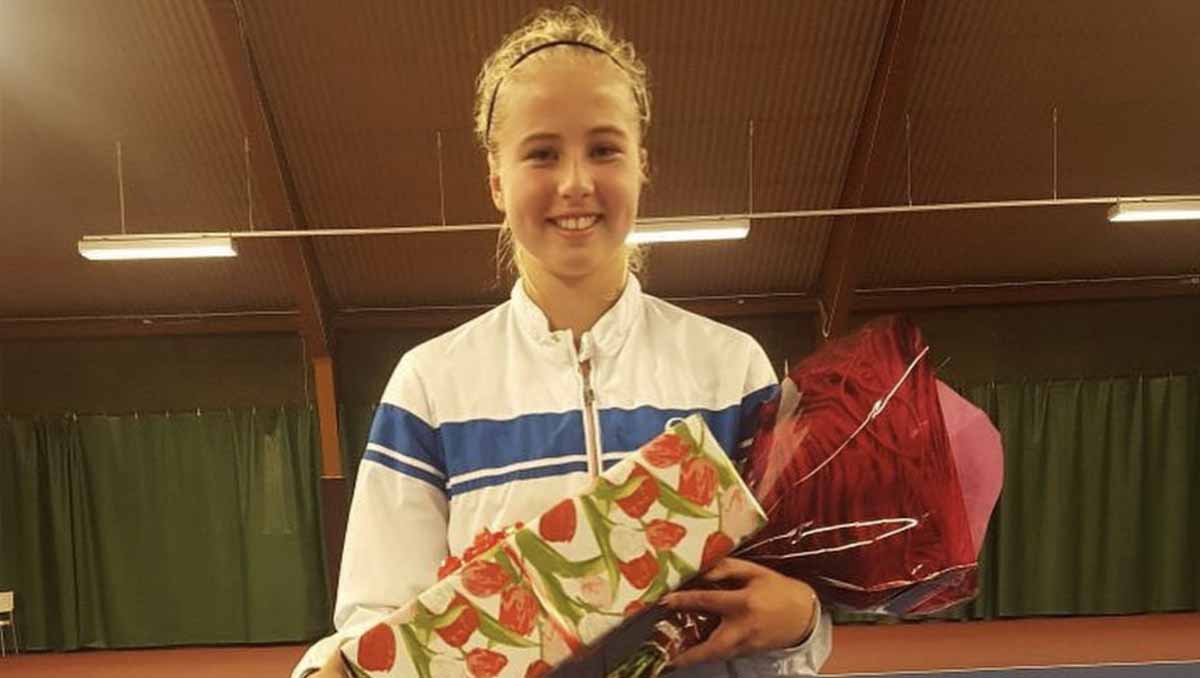 She won her first ITF title in November 2017 in Stockholm aged 14, beating Russia’s Ekaterina Yashina 6-3 6-2 in the final.

Tauson played her first junior Grand Slam main draw event at the 2019 Australian Open. She was the top seed and went on to win the title aged 16, becoming the first Danish girl to do so. She beat Canadian Leylah Fernandez in the final 6-4 6-3.

Following her triumph in Melbourne, she became the first Danish girl to top the junior world rankings. 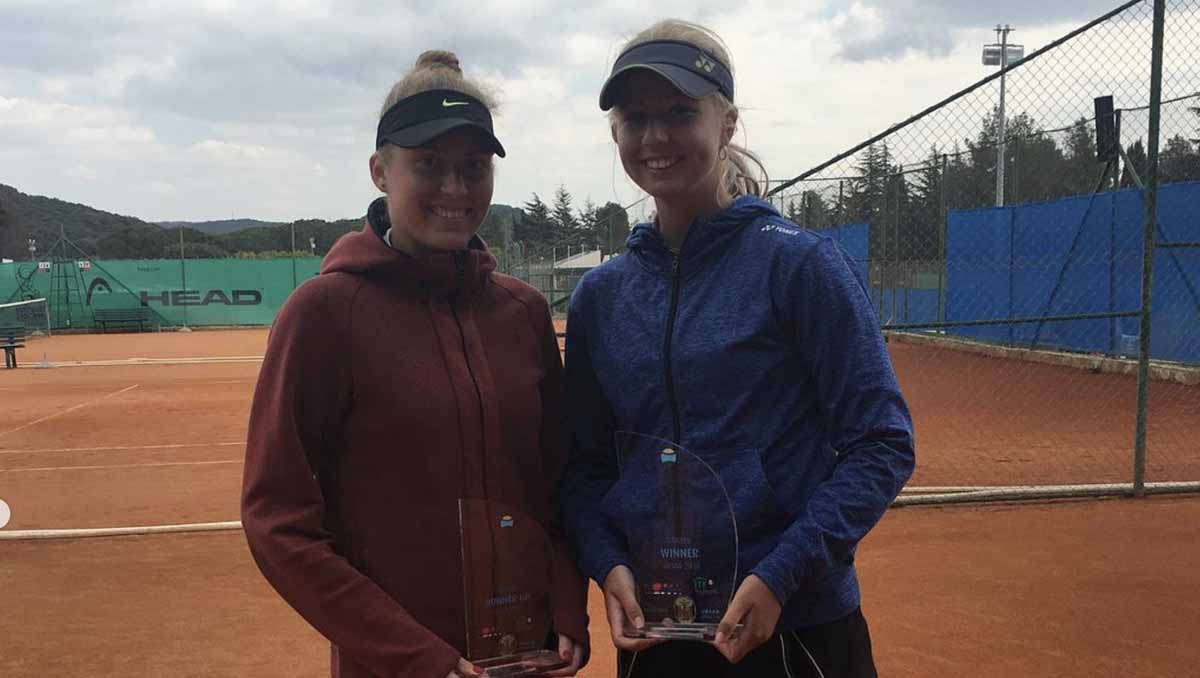 It was in 2019 that Tauson began training at Justine Henin’s Academy in Belgium.

Tauson entered her first WTA tournament at the 2019 Ladies Open in Lugano as a qualifier’s wildcard. She reached the main draw but lost her first-round match against Evgeniya Rodina of Russia.

It was in September 2020, after the initial disruption caused by the Covid-19 pandemic, that Tauson finally cracked the world’s top 200, reaching 152 in the world on November 16 2020.

She made her senior Grand Slam debut at the rescheduled 2020 French Open, coming through qualifying and beating world number 25 Jennifer Brady in the first round, before losing to Danielle Collins in the second.

Tauson won her first WTA Tour title in February 2021 at the Lyon Open after entering the tournament as a qualifier. She beat Viktorija Golubic of Switzerland 6-4 6-1 in the final.

That victory propelled Tauson into the world’s top 100 for the first time and she then qualified for the WTA 500 tournament in St. Petersburg, but lost in the first round to Russia’s Daria Kasatkina.

She reached the second round of the 2021 French Open, where she lost to Viktoria Azarenka in straight sets. She also lost in the first round of Wimbledon, to Barbora Krejcikova of the Czech Republic.

Tauson beat Emma Raducanu in the final of the Chicago Challenger event in the lead-up to the US Open, which the British player would go on to win as a qualifier. 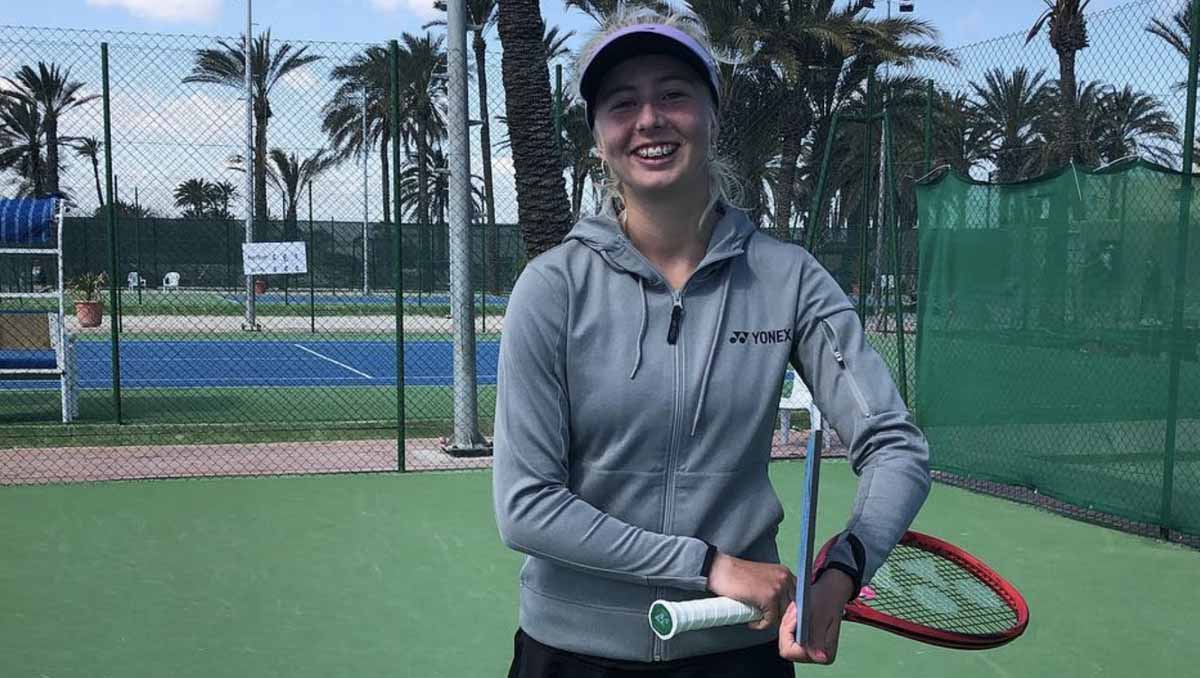 She then reached the second round of the US Open, where she was beaten by Ashleigh Barty.

Tauson won her second WTA title shortly after the US Open, when she triumphed at the 2021 Luxembourg Open, beating defending champion Jeļena Ostapenko of Latvia in the final. Her impressive results in the year so far propelled her into the world’s top 50 for the first time.

Tauson ended her impressive 2021 season after finishing as runner-up to Croatia’s Donna Vekic at the Courmayeur Ladies Open.

Clara began the 2022 season in impressive fashion at the Australian Open. She beat Astra Sharma and Anett Kontaveit to reach the third round, where she lost to American Danielle Collins in three sets.

Tauson sees herself as having an aggressive game and enjoys coming to the net where possible. She looks up to former world number two Petra Kvitova as one of her inspirations.

“Definitely [my game is aggressive],” she said. “I like to come in the court and finish at net if I have the opportunity – but it’s really hard to do that against [WTA] players because they play so good.

“I would like to be the kind of player who serves really well, plays big shots – like Kvitova. She’s not afraid to hit the ball. I really think I can be that type of player.

Tauson has also revealed that, as well as Kvitova, she looks up to former world number one Simona Halep of Romania as one of her tennis idols. 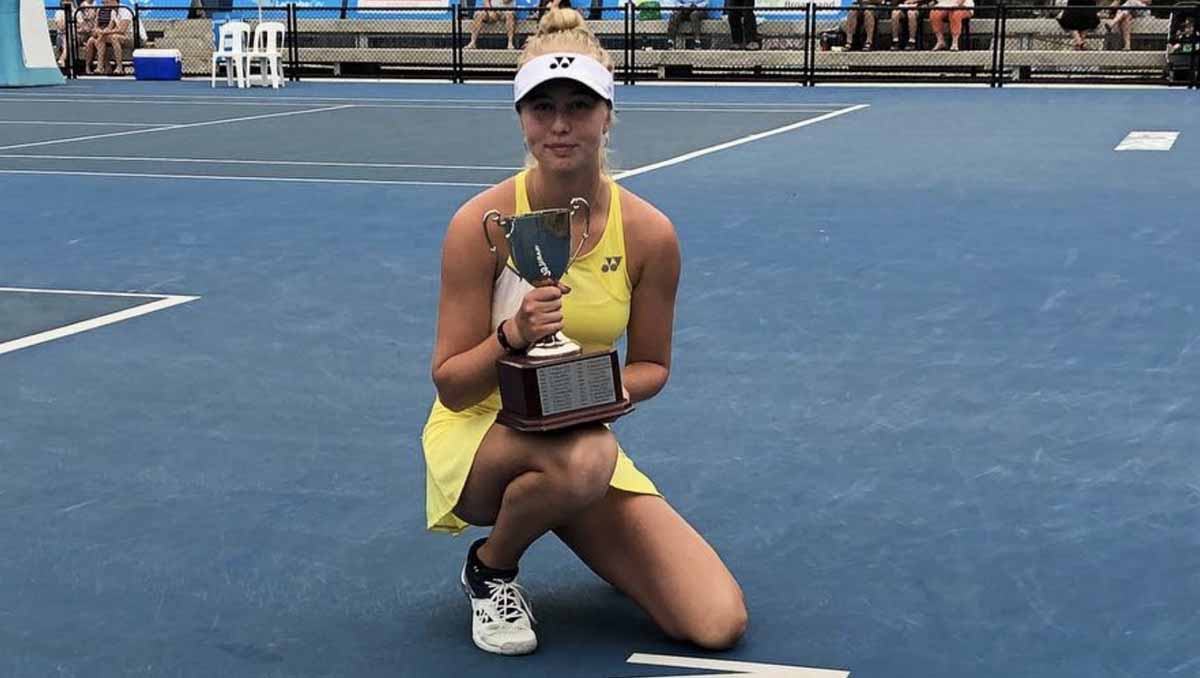 “I definitely want to play Simona Halep one day,” Tauson said in March 2021. “I think she’s just a champion, she plays 100 per cent every tournament she plays and no matter what the score, she’s always there. And Kvitova also – I love watching her play. I want to feel how her balls are coming, because she just hits so big and I want to play like her.”

Asked to describe what she loves about tennis, Tauson explains that she loves the fact that she is in charge of her own destiny on the court.

“I love that I can decide where I want to play the ball and it’s only me who decides if I win or lose,” she says. “I’m definitely not a team player!

“Of course there’s an opponent you have to beat, but it’s me who decides where and how I play the balls. And the tactics also – it’s like a board game, but you don’t know how the opponent is going to play, because it’s so different from player to player. But the individual thing is the best thing for me.”

Away from the court, Tauson enjoys catching up with friends and watching some of the latest crime dramas. 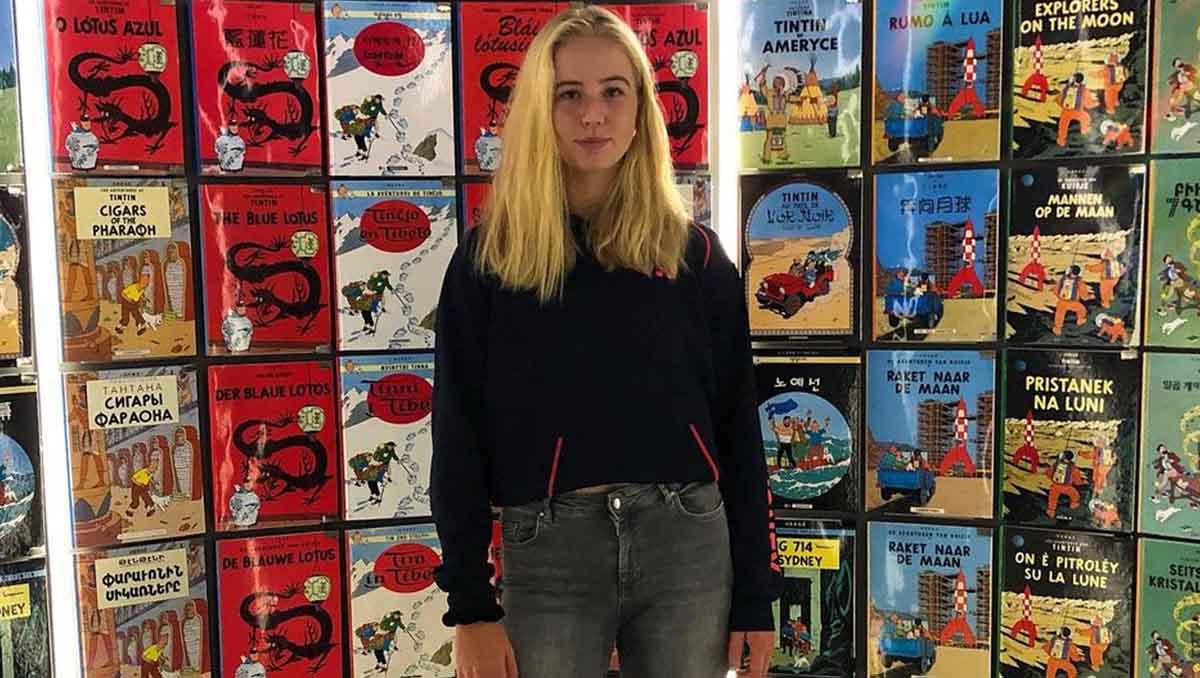 “My friends are mostly in Denmark – so I like to Facetime them, or watch Netflix,” she explains. “When I’m not on court or doing fitness I just like to be on the couch.

“I really like watching crime shows, like The Blacklist – I have an obsession with watching shows like that because they get my mind off things but are still so exciting.”